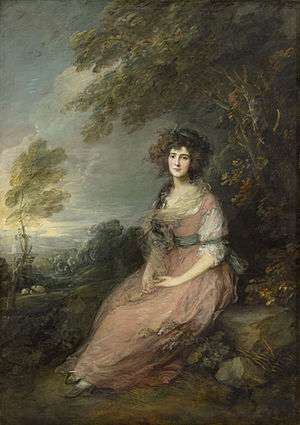 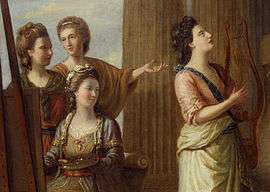 Elizabeth Ann Sheridan (née Linley) (September 1754 – 28 June 1792) was the first daughter (and second of twelve children) of the composer Thomas Linley and his wife Mary Johnson, and was herself the wife of the leading playwright Richard Brinsley Sheridan. She was one of the most noted soprano singers of her day, though her husband discouraged her from performing in public after their marriage.

Elizabeth Ann Sheridan (née Linley) was born in the autumn of 1754 but the exact date varies with sources giving 4, 5 or 7 September,[1] at either Abbey Green[1] or 5 Pierrepont Street, Bath.[2] Her father was Thomas Linley, an English musician and composer, and her mother was Mary Johnson (1729–1820) who was also a talented musician.[3] Elizabeth was the couple's eldest daughter (there was an older brother but he died in early childhood[4]), and like several of her siblings inherited her parents' musical abilities.[3] It is likely she began singing at concerts when she was only nine years old and she made her formal stage début alongside her brother, also named Thomas, in 1767 at Covent Garden, London.[1] The concert, or masque, featured music by Bach and was called The Fairy Favour.[5] Elizabeth sang and her brother played the part of Puck.[6]

At the end of 1770, she was betrothed to an elderly but wealthy suitor, Walter Long, but the engagement was broken off shortly before the wedding took place. Long paid her compensation of £3,000 in 1771 and she also received £1,000 worth of clothing and jewellery.[1] On 26 June 1771, a new comedy, called The Maid of Bath, opened at the Haymarket Theatre, dramatising her story.[7] Written by Samuel Foote, it played for 24 nights in London and was very popular but made Elizabeth a figure of ridicule.[8]

She moved to France in 1772 accompanied by Richard Brinsley Sheridan and an invalid marriage may have taken place in March 1772 but there are no official records to verify it.[1] The abscondment may have been an attempt to avoid the unwanted attention of 'Captain' Thomas Mathews, a married man.[9] The Linley family made the acquaintance of Mathews when he moved to Bath in 1770; a descendant of Thomas Mathews, he had resigned his military career when he married.[10] He amorously pursued Elizabeth despite his marital status.[11] Elizabeth's father may have delayed seeking her return until after Mathews had left Bath.[12] Mathews placed an advertisement in the Bath Chronicle, published on 9 April 1772, decrying Sheridan, then left the town a few days later.[13][14]

The young couple stayed in France for around a month,[15] returning on or around 29 April 1772.[16] A brief duel to defend Elizabeth's honour took place on the evening of 4 May 1772[17] between Sheridan and Mathews in London where they agreed to fight in Hyde Park, but finding it too crowded they went first to the Hercules Pillars tavern and then on to the Castle Tavern in Henrietta Street, Covent Garden.[18] Mathews lost his sword and begged for his life before signing a formal retraction of the advertisement he had placed.[19] The apology was made public and Mathews, infuriated by the publicity the duel had received, and goaded into action by his friend William Barnett, refused to accept his defeat as final and challenged Sheridan to another duel.[20] Sheridan was not obliged to accept this challenge, but would have become a social pariah if he had not.[20] The second duel, fought in July 1772 at Kingsdown near Bath,[9] was a much more ferocious affair.[21] This time both men broke their swords but carried on fighting in a "desperate struggle for life and honour".[22] Both were wounded, Sheridan dangerously.[21] Elizabeth was performing in Oxford and Cambridge so was unaware of the events until later.[23] Although Sheridan's injuries were severe, eight days after the duel the Bath Chronicle was able to announce that he was out of danger.[24][25]

Sheridan and Elizabeth were officially married on 13 April 1773 after their return to Britain,[1] the period when Elizabeth was described by Frances Burney as "infinitely superior to all other English singers."[1] According to later newspaper reports their courtship was "one of the classic romances of the west country" and she was "the most beautiful singer in England".[26] After they were officially married Sheridan would not allow her to appear on stage[27] in a professional capacity as he felt it reflected badly on his status as a gentleman.[28]

Thomas Gainsborough had been a friend of the family since 1759 and he painted several portraits of the Linley family.[29] His artwork The Linley Sisters was painted c. 1772 and shows Elizabeth and her sister Mary Linley shortly before the elopement.[30] Gainsborough developed an affinity with Elizabeth, intuitively sensing her subconscious thoughts.[31] His later portrait of her, entitled Mrs. Richard Brinsley Sheridan, was undertaken after her marriage and has the 31-year-old Elizabeth posed on a rock set on a hillside reflecting the rural lifestyle she begged her husband to let her lead.[32] Elizabeth was also the model for the Joshua Reynolds painting St Cecilia, which was successfully exhibited at the Royal Academy in 1775, and described by Reynolds as "the best picture I ever painted."[33] Reynolds had also become a friend of the Sheridans despite earlier friction after he invited the couple to a large dinner party he was hosting. He anticipated Elizabeth would sing for his guests and purchased a new piano to be used; he was appalled when they refused on the basis she would never "sing again in public company."[34]

The Sheridans had a tempestuous marriage as they were an ill-matched couple with Sheridan preferring city life in contrast to Elizabeth's love of the countryside.[35] After several miscarriages and a still born baby on 6 May 1777,[36] the couple had a son, Thomas (Tom), who was born in mid-November 1775.[37][lower-alpha 1] Sheridan had several affairs, as did Elizabeth, and they spent a great deal of time apart.[1] By the time she was 36, in 1790, Elizabeth was showing signs of ill-health but had to maintain the appearance of an involvement with London society.[39] While visiting Devonshire House Elizabeth met Lord Edward FitzGerald and they became lovers.[40] She conceived a child by him, a baby girl who was born on 30 March 1792.[1] The trauma of childbirth exacerbated Elizabeth's illness and she died of tuberculosis on 28 June 1792.[1] Elizabeth was buried at Wells Cathedral on 7 July 1792.[41]

After her death, Sheridan fulfilled his promise to look after Elizabeth and FitzGerald's baby daughter, Mary. A nurse was employed to care for the child at his Wanstead home.[42] The baby had a series of fits on an evening in October 1793 when she was 18 months old, dying before a doctor could attend. She was interred beside her mother at Wells Cathedral.[43] Elizabeth's son, Thomas, had unsuccessfully tried for a political career and briefly served in the army before running off to marry Caroline Henrietta Callander of Craigforth (1779–1851), a daughter of Sir James Campbell.[44][45] His father gifted him a 25 per cent share of the Drury Lane Theatre in 1806 and he went on to become manager there, a role he also undertook at the Lyceum Theatre, London.[45] Like so many of his relatives, Tom was also afflicted with tuberculosis and he moved abroad to ease the symptoms; he was appointed as the Colonial Governor's treasurer at the Cape of Good Hope in 1813.[44] He appears to have died on 12 September 1817.[45][lower-alpha 2]

In an article on Mrs Sheridan included in Rees's Cyclopædia, music historian Charles Burney noted that: "There was a brilliancy, a spirit, and a mellifluous sweetness in the tone of her voice, which instantly penetrated the hearts of her hearers, as much as her angelic looks delighted their eyes. Her shake was perfect, her intonation truth itself, and the agility of her throat equal to any difficulty and rapidity that was pleasing."[46] According to musicologist and music critic Stanley Sadie, Elizabeth had "one of the sweetest and most expressive soprano voices of her time."[47]