An animation showing the relationship between pressure and volume when amount and temperature are held constant.

Boyle's law (sometimes referred to as the Boyle–Mariotte law, or Mariotte's law[1]) is an experimental gas law that describes how the pressure of a gas tends to increase as the volume of the container decreases. A modern statement of Boyle's law is

The absolute pressure exerted by a given mass of an ideal gas is inversely proportional to the volume it occupies if the temperature and amount of gas remain unchanged within a closed system.[2][3]

Mathematically, Boyle's law can be stated as

The equation states that product of pressure and volume is a constant for a given mass of confined gas as long as the temperature is constant. For comparing the same substance under two different sets of condition, the law can be usefully expressed as 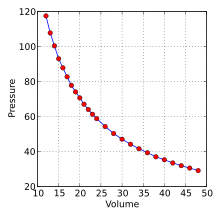 A graph of Boyle's original data

This relationship between pressure and volume was first noted by Richard Towneley and Henry Power.[5][6] Robert Boyle confirmed their discovery through experiments and published the results.[7] According to Robert Gunther and other authorities, it was Boyle's assistant, Robert Hooke, who built the experimental apparatus. Boyle's law is based on experiments with air, which he considered to be a fluid of particles at rest in between small invisible springs. At that time, air was still seen as one of the four elements, but Boyle disagreed. Boyle's interest was probably to understand air as an essential element of life;[8] for example, he published works on the growth of plants without air.[9] Boyle used a closed J-shaped tube and after pouring mercury from one side he forced the air on the other side to contract under the pressure of mercury. After repeating the experiment several times and using different amounts of mercury he found that under controlled conditions, the pressure of a gas is inversely proportional to the volume occupied by it.[10] The French physicist Edme Mariotte (1620–1684) discovered the same law independent of Boyle in 1679,[11] but Boyle had already published it in 1662.[12] Thus this law is sometimes referred to as Mariotte's law or the Boyle–Mariotte law. Later, in 1687 in the Philosophiæ Naturalis Principia Mathematica, Newton showed mathematically that if an elastic fluid consisting of particles at rest, between which are repulsive forces inversely proportional to their distance, the density would be directly proportional to the pressure,[13] but this mathematical treatise is not the physical explanation for the observed relationship. Instead of a static theory a kinetic theory is needed, which was provided two centuries later by Maxwell and Boltzmann.

This law was the first physical law to be expressed in the form of an equation describing the dependence of two variable quantities.[12] 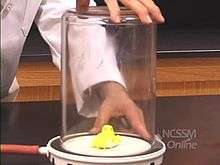 The law itself can be stated as follows:

For a fixed amount of an ideal gas kept at a fixed temperature, pressure and volume are inversely proportional.[3]

Most gases behave like ideal gases at moderate pressures and temperatures. The technology of the 17th century could not produce high pressures or low temperatures. Hence, the law was not likely to have deviations at the time of publication. As improvements in technology permitted higher pressures and lower temperatures, deviations from the ideal gas behavior became noticeable, and the relationship between pressure and volume can only be accurately described employing real gas theory.[14] The deviation is expressed as the compressibility factor.

Boyle (and Mariotte) derived the law solely on experimental grounds. The law can also be derived theoretically based on the presumed existence of atoms and molecules and assumptions about motion and perfectly elastic collisions (see kinetic theory of gases). These assumptions were met with enormous resistance in the positivist scientific community at the time however, as they were seen as purely theoretical constructs for which there was not the slightest observational evidence.

Daniel Bernoulli in 1737-1738 derived Boyle's law using Newton's laws of motion with application on a molecular level. It remained ignored until around 1845, when John Waterston published a paper building the main precepts of kinetic theory; this was rejected by the Royal Society of England. Later works of James Prescott Joule, Rudolf Clausius and in particular Ludwig Boltzmann firmly established the kinetic theory of gases and brought attention to both the theories of Bernoulli and Waterston.[15]

The debate between proponents of Energetics and Atomism led Boltzmann to write a book in 1898, which endured criticism up to his suicide in 1906.[15] Albert Einstein in 1905 showed how kinetic theory applies to the Brownian motion of a fluid-suspended particle, which was confirmed in 1908 by Jean Perrin.[15]

The mathematical equation for Boyle's law is:

So long as temperature remains constant the same amount of energy given to the system persists throughout its operation and therefore, theoretically, the value of k will remain constant. However, due to the derivation of pressure as perpendicular applied force and the probabilistic likelihood of collisions with other particles through collision theory, the application of force to a surface may not be infinitely constant for such values of v, but will have a limit when differentiating such values over a given time. Forcing the volume V of the fixed quantity of gas to increase, keeping the gas at the initially measured temperature, the pressure p must decrease proportionally. Conversely, reducing the volume of the gas increases the pressure. Boyle's law is used to predict the result of introducing a change, in volume and pressure only, to the initial state of a fixed quantity of gas.

Boyle's law, Charles's law, and Gay-Lussac's law form the combined gas law. The three gas laws in combination with Avogadro's law can be generalized by the ideal gas law.

Boyle's law is often used as part of an explanation on how the breathing system works in the human body. This commonly involves explaining how the lung volume may be increased or decreased and thereby cause a relatively lower or higher air pressure within them (in keeping with Boyle's law). This forms a pressure difference between the air inside the lungs and the environmental air pressure, which in turn precipitates either inhalation or exhalation as air moves from high to low pressure.[16]