Energetics (also called energy economics) is the study of energy under transformation. Because energy flows at all scales, from the quantum level to the biosphere and cosmos, energetics is a very broad discipline, encompassing for example thermodynamics, chemistry, biological energetics, biochemistry and ecological energetics. Where each branch of energetics begins and ends is a topic of constant debate. For example, Lehninger (1973, p. 21) contended that when the science of thermodynamics deals with energy exchanges of all types, it can be called energetics.

In general, energetics is concerned with defining relationships to describe the tendencies of energy flows and storages under transformation, defined here as phenomena which behave like historical invariants under repeated observations. When some critical number of people have observed such invariance, such a principle is usually then given the status of a 'fundamental law' of science. As in all scientific inquiry, whether a theorem or principle is considered a fundamental law appears to depend on how many people agree to the proposition. The ultimate aim of energetics therefore is the description of fundamental laws. Philosophers of science have held that the fundamental laws of thermodynamics can be treated as laws of energetics, (Reiser 1926, p. 432). By continuing to more accurately describe these laws, energetics aims to produce reliable predictions about energy flow and storage transformations at any scale.

Energetics has a controversial history. Some authors maintain that the its origins may be found in the work of the ancient Greeks, but that the mathematical formalisation began with the work of Leibniz. Richard de Villamil (1928) said that Rankine formulated the science of energetics in his paper Outlines of the Science of Energetics published in the Proceedings of the Philosophical Society of Glasgow in 1855. W. Ostwald and E. Mach subsequently developed the study, and by the late 1800s energetics was understood to be incompatible with the atomic view of the atom forwarded by Boltzmann's gas theory. Proof of the atom settled the dispute but not without significant damage. In the 1920s Lotka attempted to build on Boltzmann's views through a mathematical synthesis of energetics with biological evolutionary theory. Lotka proposed that the selective principle of evolution was one which favoured the maximum useful energy flow transformation. This view subsequently influenced the further development of ecological energetics, especially the work of Howard T. Odum.

De Villamil attempted to clarify the scope of energetics with respect to other branches of physics by positing a system that divides mechanics into two branches; energetics (the science of energy), and "pure", "abstract" or "rigid" dynamics (the science of momentum). According to Villamil energetics can be mathematically characterised by scalar equations, and rigid dynamics by vector equations. In this division the dimensions for dynamics are space, time and mass, and for energetics, length, time and mass (Villamil 1928, p. 9). This division is made according to fundamental suppositions about the properties of bodies, e.g.:

In Villamil's classification system, dynamics says yes to 1 and no to 2, whereas energetics says no to 1 and yes to 2. Therefore, in Villamil's system, dynamics assumes that particles are rigidly fixed together and cannot vibrate, and consequently must all be at zero kelvin. The conservation of momentum is a consequence of this view, however it is considered valid only in logic and not to be a true representation of the facts (Villamil, p. 96). In contrast energetics does not assume that particles are rigidly fixed together, and thus are free to vibrate, and consequently can be at non-zero temperatures. 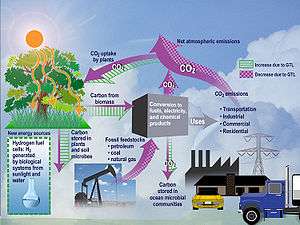 Ecological analysis of CO2 in an ecosystem

... successive stages in the flow of energy through the biological macrocosm

Odum proposed 3 further energetic principles and one corollary that take energy hierarchy into account. The first four principles of energetics are related to the same numbered laws of thermodynamics, and are expanded upon in that article.