Brig, officially Brig-Glis (French: Brigue-Glis, Italian: Briga-Glis) is a historic town and a municipality in the district of Brig in the canton of Valais in Switzerland.

The current municipality was formed in 1972 through the merger of Brig (city), Brigerbad and Glis.[3]

Together with other Alpine towns Brig-Glis engages in the Alpine Town of the Year Association for the implementation of the Alpine Convention to achieve sustainable development in the Alpine Arc.

Brig-Glis was awarded Alpine Town of the Year 2008.

The official language of Brig is (the Swiss variety of Standard) German, but the main spoken language is the local variant of the Alemannic Swiss German dialect.

The name Brig is derived from Briva, or "bridge." Its older houses are very Italian in appearance, while its most prominent buildings (Stockalper Palace, former Jesuits' college and Ursuline convent) all date from the 17th century, and are due to the generosity of a single member of the local Stockalper family, the baron Kaspar Stockalper.

The prosperity of Brig is bound up with the Simplon Pass, so that it gradually supplanted the more ancient village of Naters opposite, becoming a separate parish (the church is at Glis, a few minutes from the town) in 1517. Its medieval name was Briga dives. The opening of the carriage road across the Simplon (1807) and of the tunnel beneath the pass (1906), as well as the fact that above Brig is the steeper and less fertile portion of the Upper Valais (then much frequented by tourists), greatly increased the importance and size of the town.

Brig is first mentioned in 1215 as Briga. The first evidence of human habitation near Brig comes from a few Bronze Age objects, a bracelet and a dagger. The area remained inhabited through the Latène era with scattered Walser settlements. During the Roman era the Roman influence was strongest along the Roman road on the valley floor. The area remained settled during the Iron Age, Migration Period and Early Middle Ages.[4]

The de Briga family is first mentioned in 1215. The family was probably a branch of the Mangoldi line which was first mentioned in 1181 and is probably identical to the de Curia (im Hof) family which appeared between 1308-35. The family seat was the Höllenburg, which was a tower above Brig. By the 17th Century the tower had been demolished. It is likely that the city was founded by the Bishop of Sion, when they built a tower and curtain wall in the 12th century. The original tower was replaced with a new tower in the 13th Century, which was demolished in 1970.[4] 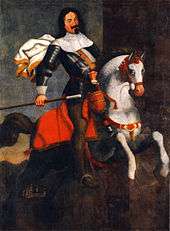 Starting in the middle of the 13th Century, it was a storage, transshipment and customs station for transportation over the Simplon Pass. By the early modern era a number of families were wealthy from trade and built palatial homes and public buildings in the city. The Renaissance tower of the Provincial Governor Kaspar Metz Elten was built in 1526. Then, in 1658-78, Kaspar Stockalper built the Stockalper Palace with three towers, and arcaded courtyard and a park. The early modern city also featured the old Stockalper house (ca. 1533), the Salzhof (16th century, demolished 1967) which served as a transshipment and storage point, the patrician houses of Wegener (17th century), Mannhaft (1709) and Fernanda de Stockalper (1727). Outside the city, in 1677, Kaspar Stockalper built the Matteni manor house for Georg Christoph Mannhaft.[4]

Brig originally belonged to the large parish of Naters until 1642 when it became part of the parish of Glis. Brig became its own parish in 1957 and built a parish church in 1967-70. In 1624-27, the Jesuits established a branch in the town. Between 1662-1773 and again in 1814-47, they ran a college in the town. The college was built in 1663-73 followed by the college church in 1673-87. Between 1773-1814 the college was administrated by the Piarists. Since 1848 it was operated by the Canton of Valais, and until 1990 the rector was a lay priest. The first Capuchin monastery was built in 1650-60, but the existing monastery is from 1947-48. An Ursuline convent was founded in 1661 with a girls' school and the Ursuline Church dates from 1732. Since 1937 it has been the mission house (and sometimes a seminary) the Mariannhill Missionaries. The Anthony hospital was established in 1304. The gothic hospital church was built in the 14th century and the first hospital religious order was founded in 1399. It was later passed to the community, and served the town until 1908. The citizenry built the Sebastian Chapel in 1636-37 and restored it in 1972-73. In 1951, Karl Schmid built the Wehrmann chapel.[4] 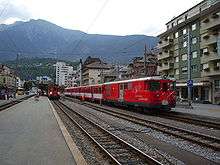 The construction of the new road over the Simplon Pass in 1801-05, the expansion of the old road between 1949–60 and the construction of a national highway starting in 1960, have allowed increasing traffic through Brig. In 1890-1905 stagecoaches transported 152,816 persons to Domodossola over the pass. In 1906 the first car drove over the Simplon. Since 1919, postal buses have run over the pass into Brig. This service expanded from seasonal to year round in 1970. The first rail line into Brig was finished in 1874 and connected the town to the west by the Rhone Valley. The Lötschbergtunnel, which opened in 1913, connected Brig to Bern. When the Simplon Tunnel was built in 1906 and the second tunnel was added in 1921, it provided a year round, reliable rail link with Italy. In 1926, the Furka-Oberalp rail line connected Brig with Disentis in Graubünden. The railway station was built in 1877-78, and was expanded in 1910 with a new building, which also serves as a freight station and border station. The 1910 station was expanded in 1957, 1961 and 1993. In 1859 a telegraph office was built in town, followed by a local telephone network in 1898.[4]

As it became easier to travel to Brig, the tourism industry grew. The number of hotel beds in town rose from 120 in 1800, to 425 in 1912 and to 1,000 in 1993. By 2002 the number of beds had dropped to about 820. In 1858 a large sawmill was built in town. This was followed by other smaller industrial companies, including woodworking, pasta production, telephone apparatus, gloves and knitwear. The Brig-Naters power plant was built in 1900 to supply power to the towns and their growing industry. However, in the middle to late 20th Century, most of the industrial plants left Brig. In 1990, 81% of the work force worked in the services or tertiary sector of the economy. Only 18% worked in industry and 1% worked in agriculture. In 2001 there were 7,129 employees in Brig-Glis, working for 803 companies.[4]

The oldest traces of human settlements around Glis were discovered in 1992 and included significant traces of settlements from the Bronze and Iron Ages. During the Middle Ages, Glis, Holz and Gamsen formed a municipality in the Zenden. Starting around 1320, the settlement of Wickert (now part of Glis) was a farming estate that belonged to the collegiate church of Sion. In the early 14th Century an earthen wall was built across the Rhône Valley at Gamsen. This wall, portions of which are still visible, was probably built to protect against invasions from Savoy. In 1596, an iron mine was opened near the village. This mine was acquired in 1636, by Kaspar Stockalper.[5]

Until 1642, Glis belonged to the parish of Naters, but had been relatively independent in religious matters since the 12th-13th Century. The Church of Our Lady on the Glisacker has been a pilgrimage center of the Upper Valais since the 14th Century. Glis was raised to an independent parish in 1642. At that time, the parish included Brig, Brigerbad, Ried-Brig, Termen, Gamsen and Eggerberg. Excavations in and around the church in 1984 discovered an early Christian aisleless church from around 500. The excavations also discovered a baptistery and side rooms and parts of four other churches. The present church, which combines elements of both the Renaissance and the lateGothic period, owes its appearance to Prismell master builders Peter and Christian Bodmer. In the mid-17th Century they completed the plans drawn up in 1519 by Ulrich Ruffiner.[5]

After the Second World War, Glis developed from a farming village into a residential area for Brig. In the merger with Brig, Glis brought a large amount of land and a large industrial company, the explosives factory Société suisse des explosifs which was founded in Gamsen in 1894.[5]

Very little is known about the early history of this small village located between the Rhone and the far north side of the valley. There are two buildings in the village that are from the Middle Ages: the tower of Junker von Baden, which may have been built in the 13th Century, and the so-called bishops barn, which may date from the 15th century. Brigerbad was always part of the parish of Glis, though they did build a chapel in 1721. The village began to develop local government and law in the 16th and 17th century and the first statutes were written in 1671.

The floods of the Rhone, maintenance of Gamsner bridge (first mentioned in 1395) and the reclamation of the Eyen were commonplace activities from the 13th Century until the Rhone Correction in 1873-82.

Brigerbad was known for its hot springs. The village's name literally means "Brig's baths." They were discovered in 1471 by Anton Walker and flourished in the 16th Century under Peter Owlig. The thermal hot spring baths began to decay in the 17th Century, but were rebuilt in 1934-35 and again in 1956-60. 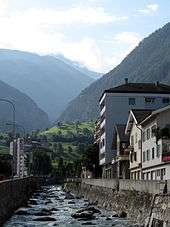 It is a picturesque small town in Upper Valais, situated at the foot of the northern slope of the Simplon Pass, on the right bank of the Saltine stream, and a little above its junction with the Rhone. Brig is located close to the Swiss-Italian borders.

The blazon of the municipal coat of arms is Or, an Eagle with dragon's tail displayed Sable, crowned, beaked, langued, membered and tailed Gules bearing an Escutcheon Gules three Mullets Or in pale.[7] 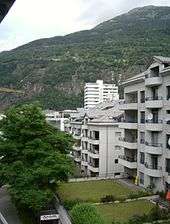 As of 2000, there were 5,111 people who were single and never married in the municipality. There were 5,331 married individuals, 678 widows or widowers and 470 individuals who are divorced.[9]

The historical population is given in the following chart:[12][13]

The Stockalperpalast, the Gamsenmauer and the Church of Mariä Himmelfahrt with ossuary are listed as Swiss heritage site of national significance. The entire old town of Brig is part of the Inventory of Swiss Heritage Sites.[14] 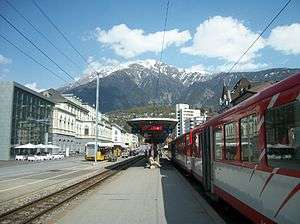 Brig railway station, with Alpine peaks in the background.

Three standard gauge railway lines, namely the Simplon railway, the Milan–Domodossola railway, and the Bern-Lötschberg-Simplon railway, operated by either SBB-CFF-FFS or BLS AG, all meet at Brig railway station. So too do two metre gauge lines, both of them operated by Matterhorn-Gotthard-Bahn, and the metre gauge trains calling at Brig include the Glacier Express. 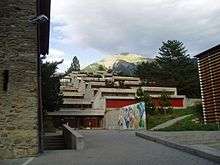 During the 2010-2011 school year there were a total of 1,243 students in the Brig-Glis school system. The education system in the Canton of Valais allows young children to attend one year of non-obligatory Kindergarten.[21] During that school year, there 9 kindergarten classes (KG1 or KG2) and 192 kindergarten students. The canton's school system requires students to attend six years of primary school. In Brig-Glis there were a total of 41 classes and 802 students in the primary school.

The secondary school program consists of three lower, obligatory years of schooling (orientation classes), followed by three to five years of optional, advanced schools. There were 441 lower secondary students who attended school in Brig-Glis.[22] There were 1,451 upper secondary students in the municipality and 3 schools in the municipality The first school, the Spiritus Sanctus has 941 students and 43 classes. The second school, the HSK Brig (with KSS) has 102 students and 9 classes. The final school, the HMS-FMS-SfB (Trade school-vocational school-school for vocational preparation) has 408 students and 19 classes.[23]

As of 2000, there were 1,177 students in Brig-Glis who came from another municipality, while 306 residents attended schools outside the municipality.[20]

Brig is popular among winter sport athletes, since it is surrounded by many Alp summits. The town itself lies close to the Rhône. Due to the high altitude, the temperatures in winter often remain below zero, resulting in frost. During the summer season, heat can be intense.