The Simplon Pass (French: Col du Simplon; German: Simplonpass; Italian: Passo del Sempione) (2,005 m or 6,578 ft) is a high mountain pass between the Pennine Alps and the Lepontine Alps in Switzerland. It connects Brig in the canton of Valais with Domodossola in Piedmont (Italy). The pass itself and the villages on each side of it, such as Gondo, are in Switzerland. The Simplon Tunnel was built beneath the vicinity of the pass in the early 20th century to carry rail traffic between the two countries.

The lowest point of the col, and the lowest point on the watershed between the basins of the Rhone and the Po in Switzerland lies in marshland about 500 m (1,640 ft) west of the Simplon Pass settlement at an altitude of 1,994 m or 6,542 ft.[2]

There are several great peaks around that can be climbed directly from the pass. These include Wasenhorn, Hubschhorn, Breithorn (Simplon), and Monte Leone. 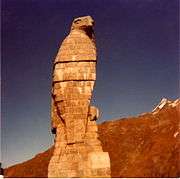 Stone eagle of Erwin Friedrich Baumann on the Simplon pass

There had been a locally used passage through the mountains here for several centuries, but the pass acquired international significance during the Napoleonic occupation. Between 1801 and 1805 the Simplon Road was constructed by the engineer Nicolas Céard at the direction of the emperor in order to transport artillery pieces through the pass between the Rhône valley and Italy. Since then, the pass has been usable by post carriages, replaced early in the twentieth century by post buses.

The road was periodically improved and in 1950 the cantonal authorities created a plan whereby the pass could be kept open all through the year, and not closed to traffic between October and late April like most Alpine passes at this altitude.[3] The improvements included several lengthy avalanche shelters along the more exposed stretches of road and the expansion of certain road tunnels to accommodate full size tourist coaches which were significantly taller than the post buses used for local passengers.[3] In October 1970, a party of journalists was invited to inspect the improvements and it was announced that the necessary improvements had been implemented on 37 km (23 mi) of the 42.5 km (26.4 mi) between Brig in Valais and the Italian frontier at Gondo, that 110 of the 180 million Swiss francs budgeted to the project had been spent and that, while a further five years would be needed to complete all the projected improvements, the Simplon Pass could now be used safely all through the year.[3]

The former Simplon département (the Swiss canton Valais) was named after the pass.

Panoramic view of the Simplon pass