Not to be confused with case fatality rate.

Mortality rate, or death rate,[1] is a measure of the number of deaths (in general, or due to a specific cause) in a particular population, scaled to the size of that population, per unit of time. Mortality rate is typically expressed in units of deaths per 1,000 individuals per year; thus, a mortality rate of 9.5 (out of 1,000) in a population of 1,000 would mean 9.5 deaths per year in that entire population, or 0.95% out of the total. It is distinct from "morbidity", a term used to refer to either the prevalence or incidence of a disease,[2] and also from the incidence rate (the number of newly appearing cases of the disease per unit of time).

Other specific measures of mortality include:

Other measures of mortality used to provide indications of the relative success or failure of medical treatment or procedures (for life-threatening illnesses, etc.) include:

Mortality may also be expressed in terms of survival.[7] Thus, the survival rate is equivalent to "1 minus the cumulative death rate"[8] (with "death from all causes", for example, being expressed in terms of overall survival). Censored survival curves that incorporate missing data by using the Kaplan–Meier estimator can sometimes be compared using statistical tests such as the log-rank test or the Cox proportional hazards test.

The ten countries with the highest crude death rate, according to the 2014 CIA World Factbook estimates, are:[10]

See list of countries by death rate for worldwide statistics.

According to the World Health Organization, the ten leading causes of death in 2002 were:[11] 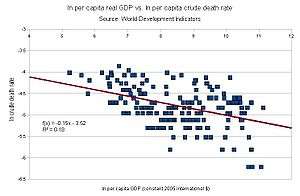 According to Jean Ziegler (the United Nations Special Rapporteur on the Right to Food for 2000 to March 2008), mortality due to malnutrition accounted for 58% of the total mortality in 2006: "In the world, approximately 62 millions people, all causes of death combined, die each year. In 2006, more than 36 million died of hunger or diseases due to deficiencies in micronutrients".[12]

Use in health care

Early recording of mortality rate in European cities proved highly useful in controlling the plague and other major epidemics.[14] Public health in industrialised countries was transformed when mortality rate as a function of age, sex and socioeconomic status emerged in the late 19th and 20th centuries.[15][16] This track record has led to the argument that inexpensive recording of vital statistics in developing countries may become the most effective means to improve global health.[17] Gathering official mortality statistics can be very difficult in developing countries, where many individuals lack the ability or knowledge to report incidences of death to National Vital Statistics Registries. This can lead to distortion in mortality statistics and a wrongful assessment of overall health. Studies conducted in northeastern Brazil, where underreporting of infant mortality is of huge concern, have shown that alternative methods of data collection, including the use of "popular Death Reporters" (Members of the community who are active in traditional death rituals of the child and the family grieving process), have been very successful in providing valid, qualitative mortality statistics, effectively reducing underreporting.[18]