The British Standard Pipe (BSP) is a family of standard screw thread types that has been adopted internationally for interconnecting and sealing pipe ends by mating an external (male) with an internal (female) thread and has been adopted as a standard scale used in plumbing fittings, except in the United States where NPT is the standard used.

Two types of threads are distinguished: 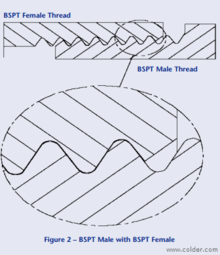 These can be combined into two types of joints:

Jointing threads
These are pipe threads where pressure-tightness is made through the mating of two threads together. They always use a taper male thread, but can have either parallel or taper female threads. (International standards require all female threads to be parallel.)
Longscrew threads
These are parallel pipe threads used where a pressure-tight joint is achieved by the compression of a soft material (such as an o-ring seal or a washer) between the end face of the male thread and a socket or nipple face, with the tightening of a backnut.

At least 41 thread sizes have been defined, ranging from 1⁄16 to 18, although of these only 15 are included in ISO 7 and 24 in ISO 228.[3][4][5][6] The size number was originally based on the inner diameter (measured in inches) of a steel tube for which the thread was intended, but contemporary pipes tend to use thinner walls to save material, and thus have an inner diameter larger than this nominal size. In the modern standard metric version, it is simply a size number, where listed diameter size is the major outer diameter of the external thread. For a taper thread, it is the diameter at the "gauge length" (plus/minus one thread pitch) from the small end of the thread. The taper is 1 to 16, meaning that for each 16 units of measurement increase in the distance from the end, the diameter increases by 1 unit of measurement.

These standard pipe threads are formally referred to by the following sequence of blocks:

Threads are normally right-hand. For left-hand threads, the letters, LH, are appended.

The terminology for the use of G and R originated from Germany (G for gas, as it was originally designed for use on gas pipes; R for rohr, meaning pipe.)

The standard ISO 7 - Pipe threads where pressure-tight joints are made on the threads consists of the following parts:

The standard ISO 228 - Pipe threads where pressure-tight joints are not made on the threads consists of the following parts: