Conservation and restoration of archaeological sites

The conservation and restoration of archaeological sites is the process of professionally protecting an archaeological site from further damage and restore it to a previous state. Archaeological sites require an extra level of care in regards to their conservation and restoration. Archaeology, even with thorough documentation, is a destructive force. This is because once a site has been even partially excavated, it cannot be put back the way it was, so in order to continue getting information from the site, it must be conserved to the current best standards.

Life of a site

According to Ashurst and Shalom, archaeological sites have several phases. [1]

Many of these phases can be repeated and happen in a variety of orders.

The source of most damage is weather. Erosion through wind, rain, freeze-thaw, and evaporation are extremely common and other than covering the site entirely cannot be prevented. However, more dramatic factors are natural disasters: floods, fires, earthquakes, volcanic eruptions, et cetera.[3] The best way to protect archaeological sites from these larger events is to formulate a risk management plan. The basics of this are to first identify what threatens the site the most and then determine its susceptibility to it. This plan will be much like that for any structure or area, the only difference is that there are no codes that must be upheld.

An example of how some locations are dealing with this is in Florida, where they have faced many floods as well as soil erosion. A technique they have been putting into effect is easements in order to protect the archaeological sites from this risk. [4] 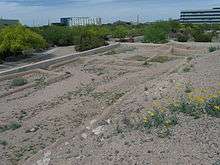 Pueblo Grande Ruin-Hohokam Village-Note the buildings in the background, this is in Downtown Phoenix, AZ

An unfortunate risk to archaeological sites is development itself. As the world continues to develop and build new buildings and roadways, many times archaeological sites are damaged. An example of this is in Arizona. There was an Ancient Puebloan site that dates to A.D. 900-1350 was damaged by construction activities while putting in a new road. [5] After the damage was assessed, it was determined that the site is not eligible for the National Register of Historic Places. However, this determination was made because there is not enough remaining for it to be of any "information important in prehistory or history."

While development cannot be discontinued simply to protect archaeological sites, having a basic understanding of what might be impacted before development takes place could help protect sites and at least the information they can provide. The Arizona Antiquities Act of 1960 is an example of some ways in which archaeological sites can be protected. [6]

An example of an unintentional vandalism is if there is someone hunting small game and they see several rock around and decide to pile them up into a berm to shoot from behind. Unbeknownst to them, those rocks were not just naturally place but actually a collapsed wall of an ancient building with the majority of it underground. An example of intentional vandalism is graffiti. This can be considered intentional even if the visitors are unaware of the location being an archaeological site because there is purposeful destruction even of a natural location. Tumamoc Hill in Tucson, Arizona has been subjected to this form of vandalism for centuries. Tumamoc HIll has a site on its top and has rock art all along the sides. It appears as though visitors throughout history have decided to join in on this tradition by adding their own initials and even own artwork. [7]

In order to protect an archaeological site from vandalism, a combination of techniques needs to be used. The most important is education of the public. This isn't just in terms of explaining that vandalism is bad, but rather to also educate them on the importance of these sites and what can be lost if they do chose to vandalize the site. This can be as easily done as adding signage. Another strategy is to discourage the activity through adding barriers, patrols, or even full-time observation. Another vital way to help is to routinely survey the area in order to track changes. This technique can also assist in terms of weathering damage. [7] 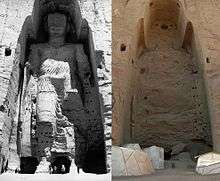 Taller Buddha of Bamiyan before and after destruction

Throughout history, war has also caused much destruction of archaeological and historical sites. The Nazis during World War II destroyed many buildings during the planned destruction of Warsaw, including several palaces and other buildings dating back to before the 13th Century. In more recent times, the Taliban destroyed the sacred Buddha statue in Afghanistan [8] and the ISIS YouTube videos. [9]

The prevention of this is virtually impossible without large-scale efforts such as those done by the Monuments, Fine Arts, and Archives program that has become popularized by the 2014 movie The Monuments Men.

The goal of archaeologists as well as other archaeological site conservators is "To preserve the physical remains of our past and to employ them in perpetuating our historical heritage." [10] The way an archaeologist can assist in this is to be as thorough in their documentation as possible. This way, even if the site is physically destroyed, there are existing records of how it once was. It is also important that archaeologists use excavation techniques that impact the site as little as possible and saves features. A current technique used is that the entire site is not actually excavated, only parts that are viewed as being able to answer research questions the best. [10] [11]

A previous technique used was to reconstruct walls and other features of the site in order to make it look more like it did when in use, however that has been mostly going out of style and instead the preservation of how the site was found is growing greater and greater in importance.

Visitors hold a large responsibility in regards to archaeological site preservation. This goes beyond just vandalism. Even just their presence can be harmful for a site. An example of this happened at Recapture Canyon in Utah. In 2007, the United State's Bureau of Land Management (BLM) had to close access to the canyon to off-road vehicles due to the damage it was causing local archaeological sites. [12] However, several visitors did not listen to this and actually created a wider trail through the canyon. Also, in May 2014 a large protest was held. This protest consisted of hundreds of protesters riding off-road vehicles through the canyon itself. [12][13] Due to the large amount of people going through in such a short amount of time, it is very possible that the protest itself caused further damage.

In order to combat further damage, archaeological sites that are open to the public are given trails that do not actually impact the site while still giving visitors a good view of it. It is important for visitors to understand their own impact on archaeological sites they visit. If there is a designated path, they should remain on it. If they see artifacts, they can point to them and take pictures but not pick them up and move them.

Conservators are the leaders in going the extra mile for archaeological site conservation. It is these specialists that need to formulate the largest and longest-lasting plan. Martha Demas has created a great outline that conservators can rely on in order to create the most impactful plan. [2][14]

The purpose of any technique used on an archaeological site is to strengthen its ability to resist damage and/or reinstate its cultural significance and ability to teach about its history.

Restoration is the "returning of the existing fabric of a place to a known earlier state by removing accretions or by reassembling existing components without the introduction of new material."[15] The biggest difficulty in this technique is the lack of introducing new material. Ideally, this is the primary technique to be used in order to strengthen the site from further damage.

Reconstruction is "returning a place to a known earlier state; distinguished from restoration by the introduction of new material into the fabric." [15] The aim of restoration is to "preserve and reveal the aesthetic and historic value of the monument and is based on respect for original material and authentic documents."[16]

There is also debate on whether this is considered conservation work or not, due to potential miss use of that fact in order to over-reconstruct. [15][17] The appropriateness of this technique is highly dependent upon the region, the amount of known knowledge of the site itself, as well as the actual condition of the site. The older a site, the more difficult it is to be confident in the reconstruction. Reconstruction should also be identifiable upon inspection as well as reversible.[17] A common form of reconstruction is the re-plastering of floors and walls. Due to weathering, the plaster that originally protected surfaces has eroded away and left the surfaces vulnerable. The re-plastering then adds that layer of protection back and in many cases was at least the same technique as originally even if it isn't exactly the same material.

Recreation/Renovation is the "speculative creation of a presumed earlier state on the basis of surviving evidence from that place to other sites, and on deductions drawn from that evidence using new materials." [15] This is the least favorable option as it is less likely to reinstate the originality of the site and many times includes the destruction of existing authentic materials in order to add new materials. It is deemed justifiable if it is the only form of effective conservation available. or if conservation measures prove to be unfeasible.[16] 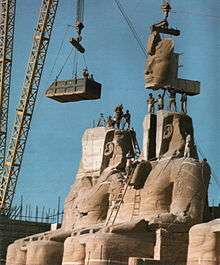 Mid-move of the Abu Simbel Temples

Relocation is a dramatic form of conservation which involves the physical movement of the site or part of the site itself.[16] This should only take place if the site would be heavily damaged or even eliminated if it were to not be moved. A famous example of this is the move of the Abu Simbel temples. The movement of these temples was expensive as well as challenging, however, if the move did not take place they would be completely underwater due to the construction of the Aswan High Dam.