This article is about the Japanese art form. For the Death Cab for Cutie album, see Kintsugi (album). 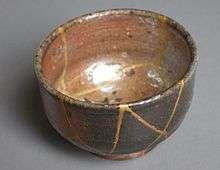 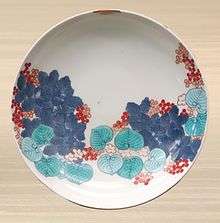 Kintsugi (金継ぎ?, きんつぎ, "golden joinery") , also known as Kintsukuroi (金繕い?, きんつくろい, "golden repair") ,[1] is the Japanese art of repairing broken pottery with lacquer dusted or mixed with powdered gold, silver, or platinum, a method similar to the maki-e technique.[2][3][4] As a philosophy, it treats breakage and repair as part of the history of an object, rather than something to disguise.

Lacquerware is a longstanding tradition in Japan,[5][6] at some point it may have been combined with maki-e as a replacement for other ceramic repair techniques. One theory is that kintsugi may have originated when Japanese shogun Ashikaga Yoshimasa sent a damaged Chinese tea bowl back to China for repairs in the late 15th century.[7] When it was returned, repaired with ugly metal staples, it may have prompted Japanese craftsmen to look for a more aesthetic means of repair. Collectors became so enamored with the new art that some were accused of deliberately smashing valuable pottery so it could be repaired with the gold seams of kintsugi.[2] Kintsugi became closely associated with ceramic vessels used for chanoyu (Japanese tea ceremony).[3] While the process is associated with Japanese craftsmen, the technique was applied to ceramic pieces of other origins including China, Vietnam, and Korea.[8]

As a philosophy, kintsugi can be seen to have similarities to the Japanese philosophy of wabi-sabi, an embracing of the flawed or imperfect.[9] Japanese aesthetics values marks of wear by the use of an object. This can be seen as a rationale for keeping an object around even after it has broken and as a justification of kintsugi itself, highlighting the cracks and repairs as simply an event in the life of an object rather than allowing its service to end at the time of its damage or breakage.[10]

Kintsugi can relate to the Japanese philosophy of "no mind" (無心, mushin), which encompasses the concepts of non-attachment, acceptance of change and fate as aspects of human life.[11]

There are a few major styles or types of kintsugi: 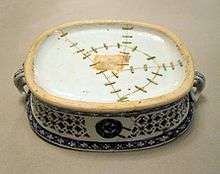 Staple repair is a similar technique used to repair broken ceramic pieces,[13] where small holes are drilled on either side of a crack and metal staples are bent to hold the pieces together.[14] Staple repair was used in Europe (in Ancient Greece, England and Russia among others) and China as a repair technique for particularly valuable pieces.[14]

Kintsugi is the general concept of highlighting or emphasizing imperfections, visualizing mends and seams as additive or an area to celebrate or focus on rather than as absence or missing pieces. Modern artists experiment with the ancient technique as a means of analyzing the idea of loss, synthesis, and improvement through destruction and repair or rebirth.[15]

While originally ignored as a separate art form, kintsugi and related repair methods have been featured at exhibitions at the Freer Gallery at the Smithsonian and the Metropolitan Museum of Art.[2][8][9]

The concept of Kintsugi inspired Tim Baker of the Canadian band Hey Rosetta! in the making of their 2014 album, Second Sight. The lead single, "Kintsukuroi," takes its name directly from the artform and the cover art of the record features a bowl repaired in the kintsugi method.

Canadian folk band The Rural Alberta Advantage also used kintsugi as inspiration for the art for their tellingly named 2014 record, Mended with Gold.

Death Cab for Cutie also named their 2015 release Kintsugi, possibly because during the production of the album, lead guitarist and founding member Chris Walla announced that he was leaving the band (though he continued contributing to the recording and creative process as a full member until the album's completion).[16]