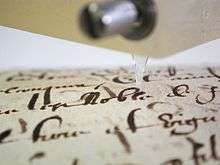 Measuring the pH of an iron gall ink inscription with a purpose made polyaniline-coated microelectrode.

Heritage science is seen as "key to the long-term sustainability of heritage: it is about managing change and risk and maximising social, cultural and economic benefit not just today, but in such a way that we can pass on to future generations that which we have inherited."[1] Domains of research, where heritage science makes a particular input were recognised to be museums, galleries, libraries and archives; the built historic environment and archaeology, by the United Kingdom National Heritage Science Strategy documents.[2]

Red rot on leather bindings was one of the first conservation issues to excite scientists.

The field still requires its literature canon and opinions on whether heritage science is a domain in its own right or a field of research diverge.[3] However, this appears a matter of academic recognition, rather than a matter of research practice.

Heritage science is an old field of research: in his Royal Institution Christmas Lecture in 1843, Michael Faraday already pointed out how pollution importantly contributes to book degradation. The following premises appear to be of defining importance:[4]

Since the context of heritage is often unknown, there can be any number of variables affecting the heritage system under observation – inductive reasoning is therefore often applied in heritage science. In this aspect, the premise of heritage science comes close to social science. Heritage that is accessible, in its preserved authentic form or as a (digital) reproduction, is a "resource for economic growth, employment and social cohesion".[5] Through improved access, heritage science therefore contributes to well-being. Heritage science is proof that there is no world of 'Two Cultures'. A scientist, researching heritage defies the existence of the divide: there can be no scientific research of heritage without a contribution by humanities research. Heritage science also successfully bridges science and culture, because it provides an attractive vehicle to convey ideas and concepts related to technology and engineering, as well as culture and society. 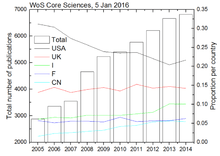 Heritage science is an increasingly lively science domain. Materials and techniques of the past are often very difficult to study and state-of-the-art techniques and methods need to be employed. Discoveries new to science are often the result of such endeavours, e.g. new antibiotics from bacteria discovered in the Cave of Altamira, in Spain. With its wide definition, heritage science spans a significant variety of scientific activities. In order to support conservation, access, interpretation and management, heritage science must be based on an interdisciplinary palette of knowledge, from fundamental sciences (chemistry, physics, mathematics, biology) to arts and humanities (conservation, archaeology, philosophy, ethics, history, art history etc.), including economics, sociology, computer sciences and engineering.

In academia, heritage science is often performed by scientists spending a proportion of their time on heritage-related research. The academic field, judged by the number of academic outputs published annually, is steadily increasing. This could be taken to estimate the domain size – with the number of outputs in 2014 being 6,800 (Source: Web of Science[6]), it could be assumed that there are about 3,000 heritage scientists active in the field (publishing on average 2 academic publications per year). This goes against the generally held view that the field is small.

The proportion per country varies greatly, about 20% of researchers being active in the US, 15% in the UK, 10% in Italy, 5% France, and 5% in China (with a strong increase in the last decade).

Since 2013, the scientific domain has its own flagship journal, Heritage Science.[7]

In 2013, the Mind the Gap project,[8] funded by the UK EPSRC/AHRC Science and Heritage Programme,[9] reported on the drivers and impediments in cross-disciplinary research.[10] The project found that there is no gap between rigour and relevance in heritage science research but rather that there is a continuum of activity. However, there was less satisfaction with heritage science research in relation to its impact on practice, in comparison to its academic impact.[11]

The SEAHA Mobile Heritage Laboratory for field research and public engagement with science and heritage.

At UCL, University of Oxford and University of Brighton, the Centre for Doctoral Training in Science and Engineering in Arts, Heritage and Archaeology (SEAHA) was established in 2014.[14]

Since the field requires significant cross-disciplinary and transferrable skills, graduates are often able to take very complex jobs in industry and academia.

The Museum Conservation Institute of the Smithsonian Institution is part of its Museum Support Center in Suitland MD.

A UK body, the National Heritage Science Forum[15] was established to enable the 'users' and 'doers' of heritage science to access information on heritage science research, to exchange knowledge and increase collaboration. In 2016, the forum had 20 institutional members.

The Heritage Science Research Network[19] captures the current activity in the field.