For other uses, see Bunting (disambiguation). 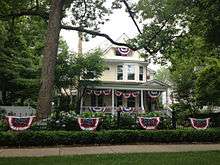 An example of bunting in Wilmette, Illinois, USA 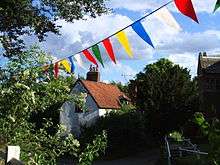 Bunting in the form of triangular flags in the West Midlands, United Kingdom 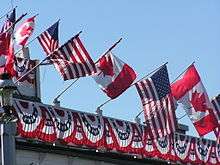 4th of July decorations in Roche Harbor include Canadian and American flags and red, white and blue bunting.

Bunting (or bunt) was originally a specific type of lightweight worsted wool fabric generically known as tammy,[1] manufactured from the turn of the 17th century,[2] and used for making ribbons[3] and flags,[4] including signal flags for the Royal Navy. Amongst other properties that made the fabric suitable for ribbons and flags was its high glaze, achieved by a process including hot-pressing.[5]

NSE Eridge-Edenbridge celebrations (1988) with Red, White and Blue commemorating the Hundred Years of the Line.

The origin of the word is uncertain.[6]

Today, bunting is a term for any festive decorations made of fabric, or of plastic, paper or even cardboard in imitation of fabric. Typical forms of bunting are strings of colorful triangular flags and lengths of fabric in the colors of national flags gathered and draped into swags or pleated into fan shapes.

The term bunting is also used to refer to a collection of flags, and particularly those of a ship.[7] The officer responsible for raising signals using flags is known as bunts, a term still used for a ship's communications officer.