Burton Leon "Burt" Reynolds (born February 11, 1936) is an American actor, director and producer. He has starred in many films, such as Deliverance, The Longest Yard, Smokey and the Bandit and Boogie Nights, in which he was nominated for his first Academy Award. 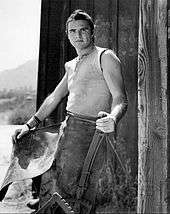 Reynolds is the son of Fern H. (née Miller; 1902–92) and Burton Milo Reynolds (1906–2002). He has English, Scottish, Scots-Irish and Dutch ancestry, and is also said to have Cherokee roots.[1][2] In his 2014 book, But Enough About Me, Reynolds said his mother had Italian ancestry. During his career, Reynolds often claimed to have been born in Waycross, Georgia, but confirmed in 2015 that he was actually born in Lansing, Michigan.[3] He was born on February 11, 1936,[4] and in his autobiography stated that Lansing is where his family lived when his father was drafted into the United States Army.[5][6] Reynolds, his mother and sister joined his father at Fort Leonard Wood, Missouri, and lived there for two years. When Reynolds' father was sent to Europe, the family moved to Lake City, Michigan, where his mother had been raised.[7]

After graduating from Palm Beach High in West Palm Beach, he attended Florida State University on a football scholarship and played halfback.[9] While at Florida State, Reynolds became roommates with now notable college football broadcaster and analyst Lee Corso, and also became a brother of the Phi Delta Theta fraternity.[10] Reynolds hoped to be named to All-American teams and to have a career in professional football, but he was injured in the first game of his sophomore season, and a car accident later that year worsened the injury.[11]

With his university football career over, Reynolds considered becoming a police officer, but his father suggested that he finish university and become a parole officer. To keep up with his studies, he began taking classes at Palm Beach Junior College (PBJC) in neighboring Lake Worth. In his first term at PBJC, Reynolds was in an English class taught by Watson B. Duncan III. Duncan pushed Reynolds into trying out for a play he was producing, Outward Bound. He cast Reynolds in the lead role based on having heard Reynolds read Shakespeare in class, leading to Reynolds winning the 1956 Florida State Drama Award for his performance. In his autobiography, Reynolds refers to Duncan as his mentor and the most influential person in his life.[12] 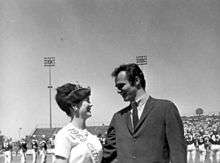 The Florida State Drama Award included a scholarship to the Hyde Park Playhouse, a summer stock theater, in Hyde Park, New York. Reynolds saw the opportunity as an agreeable alternative to more physically-demanding summer jobs, but did not yet see acting as a possible career. While working there, Reynolds met Joanne Woodward, who helped him find an agent and was cast in Tea and Sympathy at the Neighborhood Playhouse in New York City. After his Broadway debut Look, We've Come Through, he received favorable reviews for his performance and went on tour with the cast, driving the bus and appearing on stage.[13] After the tour, Reynolds returned to New York and enrolled in acting classes. His classmates included Frank Gifford, Carol Lawrence, Red Buttons, and Jan Murray. After a botched improvisation in acting class, Reynolds briefly considered returning to Florida, but he soon got a part in a revival of Mister Roberts, in which Charlton Heston played the starring role. After the play closed, the director, John Forsythe, arranged a film audition with Joshua Logan for Reynolds. The film was Sayonara. Reynolds was told that he could not be in the film because he looked too much like Marlon Brando. Logan advised Reynolds to go to Hollywood, but Reynolds did not feel confident enough to do so.[14] He worked in a variety of different jobs, such as waiting tables, washing dishes, driving a delivery truck and as a bouncer at the Roseland Ballroom. While working as a dockworker, Reynolds was offered $150 to jump through a glass window on a live television show.[15] 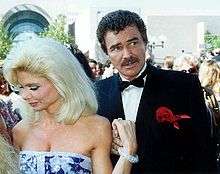 Reynolds and Loni Anderson at the 43rd Primetime Emmy Awards

Reynolds guest-starred in the Pony Express episode, "The Good Samaritan", which aired in 1960 on the centennial of the famed mail route.[16] He used television fame to secure leading roles for low-budget films and played the titular role in Navajo Joe. He later disparaged the series, telling Johnny Carson that Dan August had "two forms of expression: "mean and meaner". Reynolds appeared on ABC's The American Sportsman hosted by outdoors journalist Grits Gresham, who took celebrities on hunting, fishing and shooting trips around the world. Saul David considered Reynolds to star in Our Man Flint, but Lew Wasserman rejected him.[17] Albert R. Broccoli asked Reynolds to play James Bond, but he turned the role down, saying "An American can't play James Bond. It just can't be done."[18] The role went to George Lazenby. Reynolds then filmed Shark! with director Sam Fuller and Fuller disowned the rough cuts.[19] Reynolds made his breakout performance in Deliverance and gained notoriety when he appeared in the April 1972 issue of Cosmopolitan.[20] Reynolds claims the centerfold in Cosmopolitan hurt the chances for the film and cast to receive Academy Awards.[21] In 1977, Reynolds and Nick Nolte declined the role of Han Solo in the Star Wars franchise, and went to Harrison Ford.[22] After starring in Boogie Nights, he refused to appear in Paul Thomas Anderson's third film, Magnolia.

In 1973, Reynolds released the album Ask Me What I Am and sang along with Dolly Parton in The Best Little Whorehouse in Texas.[23] On March 15, 1978, Reynolds earned a star on the Hollywood Walk of Fame and built a dinner theatre in Jupiter, Florida followed by other franchise locations of the Reynolds Celebrity Dinner Theater including the Beacham Theater in Orlando. His celebrity was such that he drew not only big-name stars to appear in productions, but also to sell-out audiences. He sold the venue in the early 1990s, but a museum highlighting his career still operates nearby.[24] From 1977 to 1981, Reynolds topped the Quigley Publications poll of movie exhibitors, who voted him the top box-office attraction in the country. Only Bing Crosby won the poll more consecutive years. Despite much success, Reynolds' finances expired, and he filed for bankruptcy, due in part to an extravagant lifestyle, a divorce from Loni Anderson and failed investments in some Florida restaurant chains in 1996.[25][26] The filing was under Chapter 11, from which Reynolds emerged two years later.[26] Reynolds co-authored the children's book Barkley Unleashed A Pirate, a "whimsical tale [that] illustrates the importance of perseverance, the wonders of friendship and the power of imagination".[27] In early 2000, he created and toured for Burt Reynolds' One-Man Show. On video games, he voiced Avery Carrington in Grand Theft Auto: Vice City[28] and himself in Saints Row: The Third as the mayor of Steelport. He starred in the audiobook version of The Worst-Case Scenario Survival Handbook. In May 2006, Reynolds appeared in the Miller Lite beer commercial.In 2015, Reynolds took a supporting role in the satirical thriller Pocket Listing. 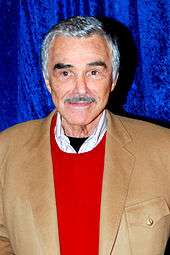 In the late 1970s, Reynolds opened Burt's Place, a nightclub restaurant in the Omni International Hotel in the Hotel District of Downtown Atlanta.[32]

In 1982, Reynolds became a co-owner of the Tampa Bay Bandits, a professional American football team in the USFL, whose nickname was inspired by the Smokey and the Bandit trilogy and Skoal Bandit, a primary sponsor for the team as a result of also sponsoring Reynolds' race team. Reynolds also co-owned a NASCAR Winston Cup team, Mach 1 Racing, with Hal Needham, which ran the #33 Skoal Bandit car with driver Harry Gant.

While filming City Heat, Reynolds was struck in the face with a metal chair, which broke his jaw and caused temporomandibular joint dysfunction. He lost thirty pounds from not eating. The painkillers he was prescribed led to addiction, which took several years to break. Reynolds underwent back surgery in May 2009 and a quintuple heart bypass in February 2010.

On August 16, 2011, Merrill Lynch Credit Corporation filed foreclosure papers, claiming Reynolds owed $1.2 million on his home in Hobe Sound, Florida.[33] Reynolds owned the Burt Reynolds Ranch, where scenes for Smokey and the Bandit were filmed and which once had a petting zoo, until its sale during bankruptcy.[34] In April 2014, the 153-acre rural property was rezoned for residential use and the Palm Beach County school system could sell it to residential developer K. Hovnanian Homes.[35]