The Cabinet of Canada (French: Cabinet du Canada) is a body of ministers of the Crown that, along with the Canadian monarch, and within the tenets of the Westminster system, forms the government of Canada. Chaired by the prime minister, the Cabinet is a committee of the Queen's Privy Council for Canada and the senior echelon of the Ministry, the membership of the Cabinet and ministry often being co-terminal; as of November 2015 there are no members of the latter who are not also members of the former.

For practical reasons, the Cabinet is informally referred to either in relation to the prime minister in charge of it or the number of ministries since Confederation. The current cabinet is the Trudeau Cabinet, which is part of the 29th Ministry. The interchangeable use of the terms cabinet and ministry is a subtle inaccuracy that can cause confusion.

The government of Canada, formally referred to as Her Majesty's Government,[1][2] is defined by the constitution as the Queen acting on the advice of her Privy Council;[3][4] what is technically known as the Queen-in-Council,[5] or sometimes the Governor-in-Council,[6] referring to the governor general as the Queen's stand-in. However, the Privy Council—composed mostly of former members of parliament, current and former chief justices of Canada, and other elder statesmen—rarely meets in full; as the stipulations of responsible government require that those who directly advise the monarch and governor general on how to exercise the Royal Prerogative be accountable to the elected House of Commons, the day-to-day operation of government is guided only by a sub-group of the Privy Council made up of individuals who hold seats in parliament.[4] This body of ministers of the Crown is the Cabinet, which has come to be the council in the phrase Queen-in-Council.

One of the main duties of the Crown is to appoint as prime minister the individual most likely to maintain the confidence of the House of Commons; this is usually the leader of the political party with a majority in that house, but when no party or coalition holds a majority (referred to as a hung parliament), or similar scenario, the governor general's judgement about the most suitable candidate for prime minister must be brought into play.[7] The prime minister thereafter heads the Cabinet. The Queen is informed by her viceroy of the acceptance of the resignation of a prime minister and the swearing-in of a new ministry,[7] and she remains fully briefed through regular communications from her Canadian ministers and holds audience with them whenever possible.[8]

The governor general appoints to the Cabinet persons chosen by the prime minister—John A. Macdonald once half-jokingly listed his occupation as cabinet maker—through a complex selection process; in addition to necessary personal qualifications of the potential ministers, there are also a number of conventions that are expected be followed. For instance, there is typically a minister from each province in Canada, ministers from visible minority groups, female ministers and, while the majority of those chosen to serve as ministers of the Crown are Members of Parliament, a Cabinet may also include a senator, especially as a representative of a province or region where the governing party won few or no ridings. Efforts are further made to indulge interest groups that support the incumbent government and the party's internal politics must be appeased, with Cabinet positions sometimes being a reward for loyal party members. 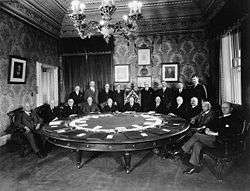 It is not legally necessary for Cabinet members to have a position in parliament; however, if such a person is appointed, he or she will rapidly seek election as a Member of Parliament or will be summoned to the Senate.[9]

As with other Westminster derived governments, but unlike the United States Cabinet, the size and structure of the Canadian Cabinet is relatively malleable, the slate of Cabinet positions tending to be substantially restructured periodically, the last major period of realignment occurring between 1993 and 1996. Throughout the 20th century, Cabinets had been expanding in size until the Cabinet chaired by Brian Mulroney, with a population of 40 ministers. Mulroney's successor, Kim Campbell, reduced this number, and Jean Chrétien eliminated approximately 10 members of the ministry from the Cabinet, so that by 1994 there were a total of 23 persons in Cabinet. Under the chairmanship of Paul Martin, the number increased again to 39, in the vicinity of which it has remained; the Cabinet proper currently comprises 31 ministers, with another 7 members of the ministry who are not of the cabinet.[10]

Cabinet itself—or full Cabinet—is further divided into committees. The Treasury Board, overseeing the expenditure of the sovereign's state funds within every department, is one of the most important of these, as is the Priorities and Planning Committee, often referred to as the inner Cabinet, which is the body that sets the strategic directions for the government, approves key appointments, and ratifies committee memberships. Other Cabinet committees include: Operations, Social Affairs, Economic Growth and Long-Term Prosperity, Foreign Affairs and Security, Environment and Energy Security.[11] Each committee is chaired by a senior minister whose own portfolio normally intersects with the mandate of the committee he or she is chairing. 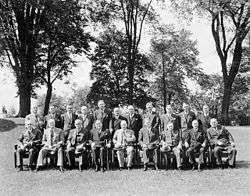 Each minister of the Crown is responsible for the general administration of at least one government portfolio and heads a corresponding ministry or ministries, known in Canada as departments or agencies. The most important minister, following the premier, is the Minister of Finance, while other high-profile ministries include foreign affairs, industry, justice, and health. The official order of precedence does not follow the same pattern, however, with ministers being listed in the order of their appointment to the Privy Council or, if appointed to the Privy Council on the same day, in order of election or appointment to parliament.[12]

Unique positions in Cabinet are those such as Leader of the Government in the House of Commons and President of the Queen's Privy Council, who have no corresponding department, and some ministers (such as the Minister for International Cooperation) head agencies under the umbrella of a department run by another minister. Further, the prime minister may recommend the governor general appoint to Cabinet some ministers without portfolio, though this has not been done since 1978, and, unlike in many other Westminster model governments, ministers of state in Canada are considered full members of Cabinet, rather than of the ministry outside it, which has the effect of making the Canadian Cabinet much larger than its foreign counterparts. These individuals are assigned specific, but temporary, responsibilities on a more ad hoc basis, fulfilling tasks created and dissolved to suit short-term government priorities from within a department under a full minister of the Crown. Ministers of state may also be named but not specified any particular responsibilities, thus giving them the effective appearance of ministers without portfolio, or be delegated problems or initiatives that cut across departmental boundaries, a situation usually described as having the [situation] file.

Members of the Cabinet receive assistance from both parliamentary secretaries—who will usually answer, on behalf of a minister, questions in the House of Commons—and deputy ministers—senior civil servants assigned to each ministry in order to tender non-partisan advice.

In the context of constitutional monarchy and responsible government, the ministerial advice tendered is typically binding, though it is important to note that, despite appearances to the contrary, the Royal Prerogative belongs to the Crown, not to any of the ministers,[13][14] and the royal and viceroyal figures may unilaterally use these powers in exceptional constitutional crisis situations.[n 1][13][19][20][21][22][23][24][25][26][27] There are also a few duties which must be specifically performed by, or bills that require assent by, the Queen.

As advisors to the sovereign, the Cabinet has significant power in the Canadian system and, as the governing party usually holds a majority of seats in the legislature, almost all bills proposed by the Cabinet are enacted. Combined with a comparatively small proportion of bills originating with individual Members of Parliament, this leads to Cabinet having almost total control over the legislative agenda of the House of Commons. Further, members of various executive agencies, heads of Crown corporations, and other officials are appointed by the Crown-in-Council, though some of these may be made only by the Governor General-in-Council specifically. Public inquiries and Royal Commissions are also called through a Royal Warrant issued by the Queen or Governor-in-Council. All Cabinet meetings are held behind closed doors and the minutes are kept confidential for thirty years, Cabinet members being forbidden from discussing what transpires. Decisions made must be unanimous, though this often occurs at the prime minister's direction, and once a decision has been reached, all Cabinet members must publicly support it. If any of these rules are violated, the offending minister is usually removed by the prime minister and, if the disagreement within the Cabinet is strong, a minister may resign, as did John Turner in 1975, over the subject of wage and price controls, and Michael Chong in 2006, over a parliamentary motion recognising "the Québécois" as a nation within Canada.

However, the Cabinet's collective influence has been seen to be eclipsed by that of the prime minister alone. Former prime minister Pierre Trudeau is credited with consolidating power in the Office of the Prime Minister (PMO)[28] and, at the end of the 20th century and into the 21st, analysts—such as Jeffrey Simpson, Donald Savoie, and John Gomery—argued that both parliament and the Cabinet had become eclipsed by prime ministerial power.[29] Savoie quoted an anonymous minister from the Liberal Party as saying Cabinet had become "a kind of focus group for the Prime Minister,"[30][31] while Simpson called cabinet a "mini-sounding board".[n 2][33] Coyne wrote in 2015: "Cabinet does not matter... It does not govern: that is the job of the prime minister, and of the group of political staff he has around him, and of the bureaucracy beyond them."[34] John Robson criticised the use of the prime minister's name to identify the Cabinet, calling it a "bad habit" that "endorses while concealing the swollen pretension of the executive branch."[35]

Each party in Her Majesty's Loyal Opposition creates a shadow cabinet, with each member thereof observing and critiquing one or more actual Cabinet portfolios and offering alternative policies. The Official Opposition's shadow cabinet comprises members of the party not in government holding the largest number of seats and is appointed by the Leader of the Opposition; it is generally regarded as a "government in waiting". Its members are often, but not always, appointed to a Cabinet post should the leader of their party be called to form a government.

The Liberal Party of Canada won the federal election of October 19, 2015 with a majority of seats in the House of Commons. The Cabinet was sworn-in on November 4, with Justin Trudeau appointed as prime minister.

Initially, five members of Cabinet were appointed by orders-in-council on November 4 as ministers of state, but styled without the traditional of state in their titles. These were the Ministers of Science,[36] Small Business and Tourism,[37] Sport and Persons with Disabilities,[38] Status of Women,[39] and La Francophonie.[40] (However, the new Minister of La Francophonie was, at the same time, appointed Minister of International Development.) Ministers of state had previously represented a second order within the Cabinet (determined by a lower salary as defined by the Salaries Act[41]), despite the Ministries and Ministers of State Act giving them full authority for any government function delegated to them.[42] However, after details of the aforementioned orders-in-council were published, the new cabinet stated its intent for there to "be no levels of cabinet members" and it would table in parliament amendments to the salary statutes, but also that the new ministers would continue to work with the existing departments rather than forming new ones.[43]

Ministers are listed according to the Canadian order of precedence:[44]