The Candy Desk has been a tradition of the United States Senate since 1968, whereby a senator who sits at a desk near a busy entrance keeps a drawer full of candy for members of the body. The same desk has not always been used; the Candy Desk was moved to its present position on the Republican side of the chamber after over three decades on the Democratic side, where it was used by several senators. The current occupant of the Candy Desk is Pennsylvania Senator Pat Toomey.

In 1965, California's George Murphy joined the Senate, and kept candy in his desk to offer his colleagues, and for himself, though eating is not allowed on the Senate floor. When he left the Senate after a six-year term, other Republican senators maintained the custom. The nascent tradition did not become publicly known until the mid-1980s, when Washington Senator Slade Gorton disclosed it in announcing that he would be sitting at the Candy Desk.

Senators who have maintained the Candy Desk tradition include John McCain, Harrison Schmitt, and Rick Santorum, who stocked it with confectionery from his home state of Pennsylvania, including from the Hershey Chocolate Company. After Santorum left the Senate in 2007, the Candy Desk was maintained by a number of senators for a short time each, before Illinois Senator Mark Kirk began his stay in 2011. The desk is currently supplied with candy made in Pennsylvania, including Milky Way bars, Mars bars, and Jelly Belly jellybeans. 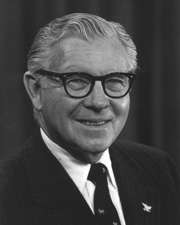 George Murphy, a one-term senator from California, is considered the founder of the candy desk tradition.

George Murphy was elected as the Senator from California in 1964, to take office the following year.[1] Murphy, known as a song-and-dance man from musicals such as Broadway Melody of 1938, Broadway Melody of 1940 and For Me and My Gal, had a taste for sweets. A short time after joining the Senate, he started keeping candy in his desk; then, in 1968, he moved desks and ended up at the spot where the Candy Desk is now situated. Since more senators now passed his desk on a daily basis, he started offering the contents of his desk to his colleagues. Senators who were invited to partake in the sweets started calling Murphy's desk the "candy desk". Murphy was defeated in the 1970 Senate elections, but subsequent senators have carried on the tradition of supplying candy in their desk for the enjoyment of the Senate as a whole.[2]

Paul Fannin, Harrison Schmitt, Roger Jepsen, and Steve Symms all continued the new candy desk tradition, in that order, after Murphy's one term was over. Fannin, Schmitt, and Jepsen supplied only hard candy, but Symms was the first to stock sweets supplied by "candy and chocolate associations."[3] During the tenures of these senators, the candy desk was not fixed to one particular spot. Senate seating charts show Schmitt, during his time with the candy desk, sat one seat to the right of its traditional spot for the 95th Congress, and then sat across the aisle from the traditional spot for the 96th.[4][5]

None of the above was publicly known until 1985, when Slade Gorton put out a press release stating "He was now the occupant of this desk and would carry on the rich traditions started by Murphy."[3] He also named the past senators who had continued the tradition.[3]

In 1997, the candy desk was referenced by Kit Bond during a debate over the National Defense Authorization Act for fiscal year 1998. He compared the sizes of microchips to candy he had taken from the desk.[6]

The high point, in terms of well-known candy, came during the ten years Rick Santorum sat at the candy desk (1997–2007). Being a senator from Pennsylvania, he filled the candy desk with Hershey candy and Just Born products (such as Mike and Ike and Hot Tamales).[7] During this time period, Hershey shipped roughly 100 pounds of chocolate and other candy four times a year for Santorum to fill the desk.[8] When Santorum did not win re-election during the 2006 U.S. Senate elections, Kirk Saville, a spokesman for Hershey, said about the company's no longer being able to supply sweets for the candy desk, "We were pleased to be a small part of sweetening up congressional proceedings."[7]

Issues arose after Santorum was defeated for re-election to the Senate in 2006, and Senator Craig Thomas began his tenure at the candy desk. Wyoming, the state he was representing, has no members of the National Confectioners Association, and therefore no candymakers large enough to donate hundreds of dollars of candy to fill the desk. Senate ethics rules "forbid members accepting gifts worth $100 or more a year from a single source,"[7] which can become a problem if a large amount of candy is consumed from the desk each year. An exception to this rule allows larger gifts of objects created or produced in the state the senator is from, as long as the items are primarily not used by the senator and his staff. This is so senators can "offer visitors home-grown snacks, such as Florida orange juice or Georgia peanuts."[7] When asked about Thomas being in charge of the candy desk, Susan Smith, a representative from the National Confectioners Association, stated, "We're happy to provide candy if there are [association] members...It would be difficult for us to do now."[7] These issues were worked around by asking many small, local, Wyoming confectionery businesses and chocolatiers to give small amounts of candy that were rotated in and out of the desk.[9]

After Thomas's death in 2007, it was looked after by George Voinovich and then Mel Martinez.[10][11] Both had relatively short tenures. In 2009, George LeMieux began sitting at the desk [12] and was there until he left the Senate in 2011.

The candy desk is not a specific desk in the Senate Chamber, but rather a specific seating within the chamber, and any desk that the senator seated in that position chooses to use becomes the candy desk.[7] The desk's location has remained static since at least the 97th Congress (1981–1983). It is next to the eastern door to the senate chamber.[13] Most senators enter the chamber through this door, which is adjacent to elevators leading to one of the stops on the United States Capitol subway system. The desk is the first desk on the right, or Republican, side, and is in the last row of desks.[2] Traditionally, the candy desk is always on the Republican side of the Senate Chamber and is used by a Republican senator.[14] The desk is currently occupied by Pennsylvania Senator Pat Toomey, who began his stay in 2015.[15]

The tenant of the candy desk is charged with stocking it with candy from his or her home state, but funding has been an issue. Originally senators would ask for a specific candy and leave a few dollars to keep the desk stocked with their favorites, but as time continued, and the candy desk became a more solid tradition of the Senate, lobby groups and organizations, specifically the National Confectioners Association and the Chocolate Manufacturers Association (before their merger in 2008), organized donations.[7]

The Democrats have also had a candy desk since at least 1985.[16] A rolltop desk located on the front wall, belonging to the United States Senate Democratic Conference Secretary, is also filled with sweets. This tradition began "sometime later" than the better known candy desk,[11] and Hershey Kisses were the most popular candy from this desk during the 1980s, "followed by small caramels."[17] Candy for this desk is paid for through a "candy fund" to which senators who would like to partake of the desk's contents contribute.[11] Jay Rockefeller then takes this money and purchases the candy. This tradition is not widely known; in fact, it is so little-known that the Historian of the United States Senate does not know much about it.[16]

Other senators sometimes keep candy in their desks as well. Katherine Buck, a United States Senate Page at the time, wrote the following in 2005:

One senator with a particularly strong hankering for chocolate is Jim Talent from Missouri. Once during a vote, he called people away from the candy desk to his own on the other side of the row. There were oohs and aahs until six people walked away with Russell Stover Low-Carb Chocolates. (I guess the Atkins craze had made its way to the Senate.)[18]