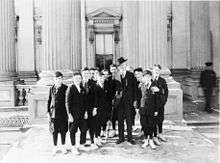 A group of Senate pages with Vice President Thomas R. Marshall on the steps of the Capitol, c. 1913-1921

In order to become a U.S. Senate Page, one must first be nominated by a Senator, generally from his or her State. A candidate must be a 16- or 17-year-old high school junior (11th grade), with at least a 3.0 GPA. Summer pages can be rising juniors or rising seniors and must have a GPA requirement of a 3.0 or higher. Processes for selection vary by state and senator. Typically, a senator's office will require the applicant submit a transcript, resume, and various essays. The process is similar to that of selecting an office employee, and may include interview of final applicants by a board of review.

Because U.S. Senate Pages are required to wear uniforms while on the job, they are some of the most recognized employees of the Senate. The uniform consists of a navy blue suit, a white, long sleeve, traditional dress shirt, a name badge, Page insignia lapel pin, and a plain, navy tie (males only).

As expected of most Senate employees, Pages are required to maintain a neat, professional appearance. Boys must be clean-shaven with hair kept short and neat, falling above their ears. Girls must also have their hair neat and kept out of their face. No extraneous jewelry is to be worn. If a page's appearance is deemed unsatisfactory during the work day he or she may be sent back to Webster Hall immediately. 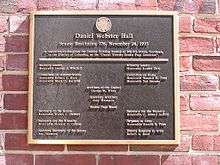 Plaque outside the Senate Page Residence

U.S. Senate Pages reside at the Daniel Webster Senate Page Residence. This facility is a former funeral home and was reconfigured in order to provide Pages with a home away from home during their time in Washington. Administration and staff include the Page Program Director, Administrative Assistant, four resident Proctors, and one non-resident Proctor.

The living quarters cover two floors, one for male Pages, the other for female Pages. Each floor has a day room for social activity. All Pages share furnished rooms with other Pages and each room is designed for four or six occupants. Each room has closet space, a bathroom, and a single telephone. The Senate Page School, laundry facilities and a kitchen are located on the basement level.

The program provides the pages with two meals per day, seven days per week. Breakfast is provided at the residence. Lunch is provided on weekdays through a meal card at the Senate Cafeterias. On Saturdays, lunch or dinner is usually provided through a voucher for a meal at Union Station, or if the Pages are on a field trip, lunch or dinner will be provided on the trip. On Sundays, the program provides dinner at the residence, or goes out to a restaurant. 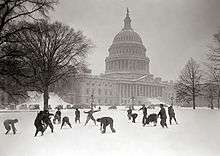 Senate Pages having a snowball fight in front of the Capitol, ca. 1925

The United States Capitol Police maintains a 24-hour post at Webster Hall as well as outside foot and car patrols. Their responsibility is to provide security for the facility and its occupants and to monitor access to the building. Webster Hall is monitored by a security alarm system.

When not at school or at work, Pages are given some liberty with their free time. Pages are subject to a strict curfew - 9:00 p.m. on school nights and 10:00 p.m. on Friday and Saturday nights - and are expected to maintain high standards of behavior. While Pages are not permitted to bring personal vehicles with them to the District of Columbia, they are encouraged to use the Washington Metropolitan Area Transit Authority (WMATA).

On weekends without school or work commitments, Pages spend their time working on school assignments, touring the many attractions in the DC area, or simply relaxing from a long week's work. For holidays, Pages return home for Thanksgiving, winter and spring breaks; the residence is closed during these periods.

The Senate Sergeant at Arms is responsible for Webster Hall.

Before the move to Webster Hall, both the House and Senate Pages shared a living space in the former House Office Building Annex #1 (which has since been torn down).

U.S. Senate Pages (who serve during either of the semester programs) attend school located in the lower level of Webster Hall. The U.S. Senate Page School is accredited by the Middle States Association of Colleges and Secondary Schools. The Page School requires each student to enroll in four classes, in the various subjects of mathematics, science, English, and social studies. Foreign language tutoring is available. Usually the students receive 3 to 4 hours of homework each night. If they do not maintain at least a C in each class, they are subject to dismissal.

The Page school supervises Student Government and the preparation of a yearbook. It also administers Page class rings, which have the Senate emblem and session of the Congress in place of a typical high school's mascot.

Pages are also required to participate in school field trips. Run by the Senate Page School, they are conducted approximately one Saturday a month to sites in or around Washington. These field trips are usually at historically oriented landmarks in the mid-Atlantic area (i.e. Liberty Bell, Philadelphia; DuPont Mills, Delaware; etc.)

Julie E. Adams, the Secretary of the Senate, is responsible for the United States Senate Page School.

Prior to the page residence being moved to Webster Hall, the U.S. Senate Page School was housed in the attic of the Library of Congress.

During the summer sessions only, pages may live at home or in the homes of their relatives in the Washington, D.C. area. These pages fulfill the same duties as the residential summer pages, except that they arrive at 9:00 AM and depart at 6:00 PM regardless of the action of the Senate that day (residential pages are required to stay until after the Senate adjourns for the day). Commuter pages are allowed to participate in field trips with the other pages.

The Page's work life revolves around the Capitol. A Page serves the party of his/her appointing Senator. Pages are employed by the Sergeant at Arms. The supervision of the Pages at work has been delegated to the cloakrooms.

Senate Pages play an important role in the daily operation of the Senate. Page duties consist primarily of delivery of correspondence and legislative material within the Capitol Complex. Other duties include preparing the Senate Chamber for sessions, taking messages for Senators or calling them to the phone, carrying bills and amendments from the presiding officer's desk. Pages also retrieve lecterns, easels, and water for Senators and clerks.

When the Senate is in session for important business, filibusters, and emergency situations, pages may still be on duty and work into the early hours of the morning.

When the Senate is not in session, Pages work from 10:00 AM to 4:00 PM. Pages are compensated $25,605 per annum, from which are deducted federal and local (based upon the individual page's permanent residence) taxes and a $780 per month residence fee (unless they are a commuter page).

The job of page comes with many perks, such as: