For the term describing a person, see politician.

Politico is an American political-journalism organization based in Arlington County, Virginia, that covers politics and policy in the United States and internationally. It distributes content via television, the Internet, The Politico newspaper, radio, and podcasts. Its coverage in Washington, D.C., includes the U.S. Congress, lobbying, media and the presidency.[3] 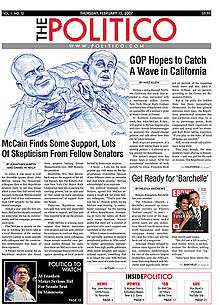 The newspaper has a circulation of approximately 40,000,[7] distributed for free in Washington, D.C., and Manhattan.[3] The newspaper prints up to five issues a week while Congress is in session and sometimes publishes one issue a week when Congress is in recess.[8] It carries advertising, including full-page ads from trade associations and a large help-wanted section listing Washington political jobs.

In a 2007 opinion piece, progressive watchdog group Media Matters for America accused The Politico of having a "Republican tilt". In a letter from Editor in Chief John F. Harris to Executive Editor Jim VandeHei, Senior Political Writer Ben Smith and Chief Political Correspondent Mike Allen, Harris reminded his colleagues that they had left the more "traditional news organizations" where they had worked previously, starting The Politico with the intent to be more transparent. To that end, he asked his colleagues for an honest assessment of the claims set forth in the letter from Media Matters. Ben Smith answered: "Media Matters has a point: ...that Bush's public endorsement made us seem too close to the White House. That was clearly a favor from the president to us (albeit a small one), and felt to me like one of those clubby Beltway moments that make the insiders feel important and the outsiders feel (accurately) like outsiders." The other primary editors disagreed with the general accusation for a variety of reasons, and some pointed to accusations of a liberal bias from the other side of the political spectrum.[15] In 2011 and 2012, The Daily Caller and Breitbart.com each published stories saying that Politico.com has a liberal bias.[16]

In September 2008, The New York Times reported that Politico would expand its operations following the 2008 presidential election: "[A]fter Election Day, [Politico] will add reporters, editors, Web engineers and other employees; expand circulation of its newspaper edition in Washington; and print more often."[17]

A 2009 profile of the organization in Vanity Fair said The Politico had an editorial staff of 75 and a total staff of 100. Its newspaper circulation is around 32,000, and as of summer 2009, its web traffic was around 6.7 million unique visitors per month. This is fewer than the 11 million it had during the high point of the campaign, but most political news outlets have lower traffic outside election years. As of July 2009, it was expected to have annual revenue of around $15 million, primarily from the printed product, enough for the publication to remain financially solvent.[7]

In September 2014, Politico formed a joint venture with German publisher Axel Springer SE to launch its European edition, based in Brussels.[19] In December 2014, the joint venture announced its acquisition of Development Institute International, a leading French events content provider, and European Voice, a European political newspaper, to be re-launched under the Politico brand. Former Wall Street Journal editorial board member Matthew Kaminski is the executive editor of the European edition.[20][21] Politico Europe debuted in print on April 23, 2015.[22] Among the reporters who work for Politico are Ryan Heath, Tara Palmeri and Matthew Karnitschnig.

In November 2016, Politico editor Michael Hirsh resigned after publishing the home address of white nationalist Richard B. Spencer on Facebook.[23][24]

In November 2013, Politico launched Politico Magazine, which is published online and bimonthy in print.[25][26] In contrast to Politico's focus on "politics and policy scoops" and breaking news, Politico Magazine focuses on "high-impact, magazine-style reporting,"[25] such as long-form journalism.[25][27] The first editor of Politico Magazine was Susan B. Glasser, who came to the publication from Foreign Policy magazine.[27][28]