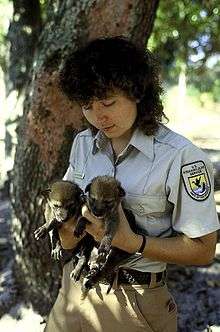 Captive breeding is the process of breeding animals in controlled environments within well-defined settings, such as wildlife reserves, zoos and other commercial and noncommercial conservation facilities. Sometimes the process includes the release of individual organisms to the wild, when there is sufficient natural habitat to support new individuals or when the threat to the species in the wild is lessened. Captive breeding programs facilitate biodiversity and may save species from extinction. Release programs have the potential for diluting genetic diversity and fitness.

Captive breeding has been successful in the past. The Pere David's deer was successfully saved through captive breeding programs after almost being hunted to extinction in China.[1] Captive-breeding is employed by modern conservationists, and has saved a wide variety of species from extinction, ranging from birds (e.g., the pink pigeon),[2] mammals (e.g., the pygmy hog),[3] reptiles (e.g., the Round Island boa)[4] and amphibians (e.g., poison arrow frogs). Their efforts were successful in reintroducing the Arabian oryx (under the auspices of the Fauna and Flora Preservation Society), in 1963. The Przewalski's horse was also successfully reintroduced in the wild after being bred in captivity.[5]

The breeding of endangered species is coordinated by cooperative breeding programs containing international studbooks and coordinators, who evaluate the roles of individual animals and institutions from a global or regional perspective. These studbooks contain information on birth date, gender, location, and lineage (if known), which helps determine survival and reproduction rates, number of founders of the population, and inbreeding coefficients.[6] A species coordinator reviews the information in studbooks and determines a breeding strategy that would produce most advantageous offspring.

If two compatible animals are found at different zoos, the animals may be transported for mating, but this is stressful, which could in turn make mating less likely. However, this is still a popular breeding method among European zoological organizations.[7] Artificial fertilization (by shipping semen) is another option, but male animals can experience stress during semen collection, and the same goes for females during the artificial insemination procedure. Furthermore, this approach yields lower-quality semen because shipping requires the life of the sperm to be extended for the transit time.

There are regional programmes for the conservation of endangered species:

Captive breeding techniques are usually difficult to implement for highly mobile species such as migratory birds like cranes and fishes like Hilsa.

Conservation biologists define endangered species as one that is likely to become extinct in the near future and is designated as endangered on the IUCN Red List.[8] Conservation seeks to eliminate threats from human activities such as habitat loss and fragmentation, hunting, fishing, pollution, predation, disease, and parasitism.[9]

Recall that endangered species are those on the verge of extinction and so are more than a very small population. A risk of captive breeding includes inbreeding, i.e., mating between two closely related individuals as a result of a small gene pool. Inbreeding may lead to decreased disease immunity and phenotypic abnormalities. With the possibility of inbreeding, populations may undergo genetic drift, where genes have the potential to disappear completely, not only reducing genetic variation but also undermining natural selection by pressuring the remaining population and their predators. [10] In the case of captive breeding prior to reintroduction into the wild, modelling works indicate that the duration of programs (i.e., time from the foundation of the captive population to the last release event) is an important determinant of reintroduction success. Success is maximized for intermediate project duration allowing to release a sufficient number of individuals, while maintaining the number of generations of relaxed selection in captivity to an acceptable level. [11] Over a sufficient number of generations, however, inbred populations can regain "normal" genetic diversity.[12]

For example, since the 1970s the Matschie's tree-kangaroo, an endangered species, has been bred in captivity. The Tree Kangaroo Species Survival Plan (TKSSP) was established in 1992 to help with the management of Association of Zoos and Aquariums (AZA). TKSSP's annual breeding recommendations to preserve genetic diversity are based on mean kinship strategy (in order to retain adaptive potential and avoid inbreeding's disadvantages). In order to evaluate a captive breeding program's performance (in maintaining genetic diversity), researchers compare the genetic diversity of the captive breeding population to the wild population. According to McGreezy et al. (2010), "AZA Matschie tree kangaroo’s haplotype diversity was almost two times lower than wild Matschie tree kangaroos". This difference with allele frequencies shows the changes that can happen over time, like genetic drift and mutation, when a species is taken out of its natural habitat.[13]

Another example is the cheetah, the least genetically variable felid species.[14] This makes it very difficult to pair animals in a way that would increase genetic diversity because all cheetahs are essentially genetically identical. It is also possible that human practices are causing even more of an inbreeding depression in the handling of the cats in zoos than exists within the wild populations.[15] Note that although the cheetah has undergone genetic drift in the form of bottlenecks thousands of years ago, they seem to experience few of inbreeding's detrimental effects.[14]

Captive breeding can contribute to behavioural problems in animals that are subsequently released because they are unable to hunt or forage for food leading to starvation, possibly because the young animals spent the critical learning period in captivity. Released animals often do not avoid predators and are not able to find ample shelter for themselves and may die. Golden lion tamarin mothers often die in the wild before having offspring because they cannot climb and forage. This leads to continuing population declines despite reintroduction as the species are unable to produce viable offspring. Training can improve anti-predator skills, but its effectiveness varies.[16][17]

Another challenge with captive breeding is the habitat loss that occurs while they are in captivity being bred (though it is occurring even before they are captured). This may make release of the species nonviable if there is no habitat left to support larger populations.

Climate change and invasive species are threatening an increasing number of species with extinction. A decrease in population size can reduce genetic diversity, which detracts from a population's ability to adapt in a changing environment. In this way extinction risk is related to loss of genetic polymorphism, which is a difference in DNA sequence among individuals, groups or populations. Conservation programs can now obtain measurements of genetic diversity at functionally important genes thanks to advances in technology.[18]

A study on mice has found that after captive breeding had been in place for multiple generations and these mice were "released" to breed with wild mice, that the captive-born mice bred amongst themselves instead of with the wild mice. This suggests that captive breeding may affect mating preferences, and has implications for the success of a reintroduction program.[19]

The De Wildt Cheetah and Wildlife Centre, established in South Africa in 1971, has a cheetah captive breeding program. Between 1975 and 2005, 242 litters were born with a total of 785 cubs. The survival rate of cubs was 71.3% for the first twelve months and 66.2% for older cubs, validating the fact that cheetahs can be bred successfully (and their endangerment decreased). It also indicated that failure in other breeding habitats may be due to "poor" sperm morphology.[20]

Wild Tasmanian devils have declined by 90% due to a transmissible cancer called Devil Facial Tumor Disease.[21] A captive insurance population program has started, but the captive breeding rates at the moment are lower than they need to be. Keeley, Fanson, Masters, and McGreevy (2012) sought to "increase our understanding of the estrous cycle of the devil and elucidate potential causes of failed male-female pairings" by examining temporal patterns of fecal progestogen and corticosterone metabolite concentrations. They found that the majority of unsuccessful females were captive-born, suggesting that if the species' survival depended solely on captive breeding, the population would probably disappear.[22]

In 2010, the Oregon Zoo found that Columbia Basin pygmy rabbit pairings based on familiarity and preferences resulted in a significant increase in breeding success.[23]

The major histocompatibility complex (MHC) is a genome region that is emerging as an exciting research field. Researchers found that genes that code for MHC affect the ability of certain species, such as Batrachochytrium dendrobatidis, to resist certain infections because the MHC has a mediating effect on the interaction between the body’s immune cells with other body cells.[24] Measuring polymorphism at these genes can serve as an indirect measure of a population's immunological fitness. Captive breeding programs that selectively breed for disease-resistant genes may facilitate successful reintroductions.[25]

There have also been recent advances in captive breeding programs with the use of induced pluripotent stem cell (iPSC) technology, which has been tested on endangered species. Scientists hope that they can convert stem cells into germ cells in order to diversify the gene pools of threatened species. Healthy mice have been born with this technology. iPSC may one day be used to treat captive animals with diseases.[26]