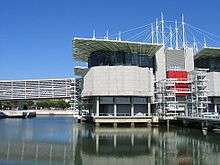 The Oceanarium in Lisbon, Portugal

An oceanarium can be either a marine mammal park, such as MarineLand, or a large-scale aquarium, such as the Lisbon Oceanarium, presenting an ocean habitat with marine animals, especially large ocean dwellers such as sharks.

Marineland of Florida, one of the first theme parks in Florida, United States, started in 1938, claims to be "the world's first oceanarium"

Marineland of Florida was developed as Marine Studios near St. Augustine in Marineland, Florida, which was followed in Florida by Miami Seaquarium, opened in 1955 and in California by Marineland of the Pacific, opened in 1954 near Los Angeles, and Marine World, Africa USA, opened in 1968 near San Francisco. SeaWorld San Diego was opened in 1964, developed by four fraternity brothers Milt Shedd, Ken Norris, David DeMott and George Millay. SeaWorld Aurora opened in 1970 near Cleveland, Ohio. SeaWorld Orlando was opened in 1973. SeaWorld (San Diego, Aurora, Orlando) was sold to Harcourt Brace Jovanovich (a publishing company listed on the New York Stock Exchange) in 1976. They purchased Marineland of the Pacific in 1986 and closed the park. They had opened SeaWorld San Antonio in 1988. In 1989 they sold SeaWorld (San Diego, Aurora, Orlando, San Antonio) to Anheuser-Busch, the world's largest brewer and owner of the Busch Gardens Safari Parks, for US$1.1 billion. In 2001, Anheuser-Busch sold the Ohio park which finally ceased its activities in 2004. In the capital of Kazakhstan is situated the only Oceanarium in Central Asia

The Marine Life Park located within Resorts World Sentosa in Singapore is the world’s largest oceanarium, with over 100,000 animals of more than 800 species in 45,000,000 l (9,900,000 imp gal; 12,000,000 US gal) of water.[1] Resorts World Sentosa has made research and education cornerstones of this attraction, which aims to inspire, educate and enrich the understanding and protection of the oceans.

Modern marine aquariums try to create natural environments. A host of marine animals swim together in the four-story cylindrical tank of the New England Aquarium in Boston, which opened in 1969. At the National Aquarium in Baltimore, which opened in 1981, a walkway spirals up through the center of two gigantic cylindrical tanks, the Atlantic Coral Reef and the Open Ocean, which display sharks, sawfish, and other sea creatures. Since then, many new aquariums have sought even greater realism, often concentrating on local environments. The richly endowed Monterey Bay Aquarium in California, which opened in 1984, is an outstanding example.[2]