This article is about the Catholic University of Leuven before its split in 1968. For the current Dutch-speaking university in the city of Leuven, Belgium, see Katholieke Universiteit Leuven. For the French-speaking counterpart in Louvain-la-Neuve, see Université catholique de Louvain. 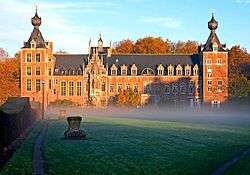 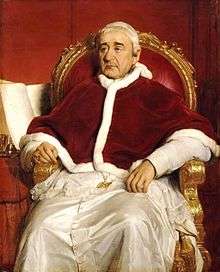 The Catholic University of Leuven (of Louvain in French, and historically in English), located in the town of Leuven, was considered the largest, oldest and most prominent university in Belgium.

The University of Leuven was founded in 1425 by John IV, Duke of Brabant and approved by a Papal bull of Pope Martin V.[1] It flourished for hundreds of years as the most prominent university in what would become Belgium, and one of the more prominent in Europe.

In 1968, the Catholic University of Leuven split to form two institutions:

This entry deals with the historic university/universities, 1425–1797 and 1834–1968. For the current successor institutions and their separate development since 1968, see the individual articles linked above.

In the 15th century the city of Leuven, with the support of John IV, Duke of Brabant, made a formal request to the Holy See for a university.[3] Pope Martin V issued a papal bull dated 9 December 1425 founding the University in Leuven as a Studium Generale. In its early years, the university was modelled on those of Paris, Cologne and Vienna. The university flourished in the 16th century due to the presence of famous scholars and professors, such as Adriaan Florenszoon Boeyens (Pope Adrian VI), Desiderius Erasmus, Johannes Molanus, Joan Lluís Vives, Andreas Vesalius, Ferdinand Verbiest and Gerardus Mercator.

After the French Revolutionary Wars, by the Treaty of Campo Formio, this region was ceded to the French Republic by Austria in exchange for the Republic of Venice. Once formally integrated into the French Republic, a law from 1793 which mandated that all universities in France be closed came into effect. The University of Leuven was abolished by decree of the Département of Dijle on October 25, 1797.[4]

In 1914, during World War I, Leuven was looted by German troops. They set fire to a large part of the city, effectively destroying about half of it. The library was lost, as well as about 300,000 books, about 1000 incunabula;[7] and a huge collection of manuscripts, such as the Easter Island tablet bearing Rongorongo text E. In the early stages of the war, Allied propaganda capitalized on the German destruction as a reflection on German Kultur.

From its beginning in 1834, the Catholic University of Louvain provided lectures only in French. Latin was sometimes used in the theology faculty, but it was essentially a French-language institution. Lectures in Dutch, the other official language of Belgium and the language spoken in Leuven, began to be provided in 1930.

In 1962, in line with constitutional reforms governing official language use, the French and Dutch sections of the university became autonomous within a common governing structure. Flemish nationalists continued to demand a division of the university, and Dutch speakers expressed resentment at privileges given to French-speaking academic staff and the perceived disdain by the local French-speaking community for their Dutch-speaking neighbours. At the time, Brussels and Leuven were both part of the officially bilingual and now defunct Province of Brabant; but unlike Brussels, Leuven had retained its Dutch-speaking character. Tensions rose when a French-speaking social geographer suggested in a televised lecture that the city of Leuven should be incorporated into an enlarged bilingual 'Greater-Brussels' region. Mainstream Flemish politicians and students began demonstrating under the slogan 'Leuven Vlaams - Walen Buiten' ("Leuven [is] Flemish - Walloons out"). Student demonstrations escalated into violence throughout the mid-60s. Student unrest fueled by the history of discrimination against Flemings eventually brought down the Belgian government in February 1968.

The dispute was resolved in June 1968 by turning the Dutch-language section of the university into the independent Katholieke Universiteit Leuven, which remained in Leuven. The French-speaking university, called the Université catholique de Louvain, was moved to a greenfield campus called Louvain-la-Neuve ("New Leuven"), farther south in the French-speaking part of the Province of Brabant. Acrimony about the split was long-lasting. Nowadays, however, research collaborations and student exchanges between the two "sister universities" take place with increasing frequency.

The ruins of the library of the Catholic University of Leuven after the library was burned by the German army in 1914.

The holdings of the modern Catholic University of Leuven date back to 1834. Its main collections were held in a building on Naamsestraat dating back to the 17th century. It should be noted that it was only the collections of the university since its refounding that were lost. The manuscripts and most valuable works of the pre-revolutionary Old University, were transported[8] to the National Library in Paris, while the bulk of the holdings (at least officially) was transferred to the Central School of Brussels, the official legal successor of the Old University of Leuven. The library of the Central School of Brussels had about 80,000 volumes, which then became part of the library of Brussels, and then the future Royal Library of Belgium where they are still found. The extensive archives of the Old University are now part of the State Archives in Belgium.[9] 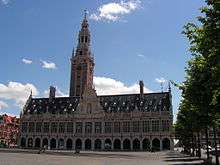 The library building designed by Whitney Warren and built from 1921–1928, now the KUL's central library.

Following the destruction of the library, a new library building was constructed on the Mgr. Ladeuzeplein. It was designed by the American architect Whitney Warren in a neo-Flemish-Renaissance style, and built between 1921 and 1928.[10] Its monumental size is a reflection of the Allied victory against Germany, and it is one of the largest university buildings in the city. The library's collections were rebuilt with donations from all around the world, outraged by the barbaric act which it had suffered. In 1940, during the second German invasion of Leuven, the building largely burnt down, including its 900,000 manuscripts and books. The blaze is thought to have started in an exchange of fire between the two armies, rather than a deliberate act. The building was rebuilt after the war in accordance with Warren's design.

The library's collections were again restored after the war, and by the fission in 1968 had approximately four million books. The split of the university into separate French-language and Dutch-language institutions in 1968 entailed a division of the central library holdings. This was done on the basis of alternate shelfmarks (except in cases where a work clearly belonged to one section or the other, e.g. was written by a member of faculty or bequeathed by an alumnus whose linguistic allegiance was clear). This gave rise to the factoid that encyclopedias and runs of periodicals were divided by volume between the two universities, but actually such series bear single shelfmarks.

The building on the Mgr. Ladeuzeplein is now the central library of the Katholieke Universiteit Leuven.