Not to be confused with Club Cerro Porteño (Presidente Franco).

Club Cerro Porteño is a professional Paraguayan football club, based in the neighbourhood of Barrio Obrero in Asunción. Founded in 1912, Cerro has won 31 Primera División titles and is one of the most popular football clubs in Paraguay. Its actual president is Juan José Zapag, from Paraguay, and the DT is Gustavo Morínigo.[1] Its main rivals are Olimpia and Libertad.

They play their home games at the General Pablo Rojas Stadium, also known as La Olla (The Boiler). 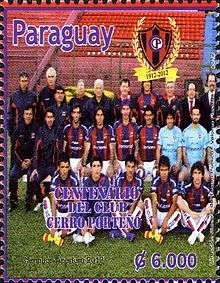 Cerro Porteño was founded on October 1, 1912 by Susana Núñez and a group of young people looking to create a new football club. At the time of Cerro's foundation the situation in Paraguay was tense with instability in the government caused by the fervent rivalries between the two leading political parties, the Partido Colorado (Colorado Party) and the Partido Liberal (Liberal Party). Because of the tensions, the founders of the club decided to use the colours of both parties, red (Colorados) and blue (Liberales), as the club's colours as a symbol of unity and friendship between Paraguayans. Later, white was used on the shorts to complete the colours of the Paraguayan flag.

The club owes its name to the battle fought between the forces of Buenos Aires, Argentina (The Porteños) and the Paraguayan army, in the neighbourhood of the Cerro Mbaé (Mbaé Hill) – named after that battle as the Cerro Porteño (Porteño Hill) – on 19 January 1811. During that battle, the troops of Paraguay (at that time a Spanish colony) were abandoned by the Spanish governor but continued to be led by the Paraguayan officials, who led them to a great victory against the Porteños troops. That battle is known as the "Battle of Cerro Porteño" and is a highlight of Paraguayan military history.

Cerro Porteño is known in Paraguay as el club del pueblo (the common people's team) because most of the fans are from lower social classes, as opposed to the fans from rival club Olimpia and Libertad whose fans are usually from the upper classes. Because of this, it is said that Cerro Porteño has the biggest number of supporters in Paraguay.

Over the years the club has won a significant number of national championships. However, to date, it has not won any international tournaments despite a few good runs in the Copa Libertadores including semi-final appearances in 1973, 1978, 1993, 1998, 1999 and 2011.

Osvaldo Ardiles joined the club as manager in May 2008 [2] but was sacked in August of the same year after a string of poor results and was replaced by Pedro Troglio.[3]

The Stadium of Cerro Porteño, originally called Gral. Pablo Rojas and also called "La Olla", is located at "Barrio Obrero" (Avenida Acuña de Figueroa 823). The stadium is currently under maintenance, but it is intended to have a capacity of 37,000 persons, the biggest stadium in Paraguay.

To appear in this section a player must have either:

Most appearances for the club (in all competitions):

Most goals for the club (in all competitions):

Most appearances for the club (in league):

Most goals for the club (in league):

Most appearances for the club (in international cup):

Most goals for the club (in international cup):

The women's team has won the Paraguayan women's football championship four times, in 2007 and 2012 to 2014.[8] The team then played in the Copa Libertadores Femenina.