Jorge Daniel Fossati Lurachi (born 22 November 1952 in Montevideo) is a former Uruguayan footballer and coach who currently manages Qatar. He was played as a goalkeeper, mainly in Peñarol. While playing at Peñarol, he helped the club win five league titles. He also had spells in Argentina with Independiente and Rosario Central, in Chile with Green Cross Temuco (currently Deportes Temuco) and with Brazilian team Coritiba.

Having played as a goalkeeper during his footballing tenure, Fossati states that he had the opportunity to view matches through the perspective of a spectator and the ability to interpret the plays. He began coaching his teammates as a goalkeeper, under the supervision of the coach. As he aged, he started to write analyses of the games and coaches, noting which facets he would have adjusted.[2]

After retiring as a player, Fossati decided to take up management. In the beginning, he had spells in charge of River Plate Montevideo Peñarol and Danubio F.C. in Uruguay. He also had spells as manager of Colón de Santa Fe in Argentina, Cerro Porteño in Paraguay and LDU Quito in Ecuador.

He became manager of the Uruguay National team in 2004.[3] He coached Al-Sadd in Qatar and after winning all four domestic titles with them, was unveiled as the new Qatari national team manager in 2007.[4] In late 2008, it was announced that he would undergo surgery. Subsequently, the Qatar FA ended their cooperation with Fossati, who supposedly needed too long to recover from surgery.

In 2009, Fossati signed with LDU Quito from Ecuador to manage the team for the second time. He helped LDU Quito win the Recopa Sudamericana 2009 matches against Sport Club Internacional de Porto Alegre. LDU Quito won both games of the Recopa 1–0 and 3–0, respectively. This gave LDU Quito their second international title. After that he led them in the 2009 Peace Cup held in Spain. LDU were drawn in Group B, along with Spanish giants Real Madrid and Saudi outfit Al-Ittihad.[5] Although LDU won defeated Al-Ittihad 3–1 in their first game, they bowed out of the competition after losing 2–4 to Real Madrid, a match which saw Cristiano Ronaldo's first goal for Real Madrid.

After Internacional and Mário Sergio parted ways, as per their previous agreement, the Brazilian club turned to the foreign market in South America and reached a deal with Fossati. He is fluent in Portuguese and lived in Brazil during the 1980s. On 13 December 2009, Fossati left LDU Quito to join Internacional for one year, Following negative results, Fossati was fired from Sport Club Internacional on 28 May after a long meeting with club officials. After that, he was named as head coach of Al-Shabab and was nearly reached last season's AFC Champions League semi-finals with the team. He was sacked by Al-Shabab in December 2010, but returned for another crack at the continental title, after being put in charge of Al-Sadd for a second time between 2010 to 2012 and won the Asian Championship in 2011 in a dramatic campaign. He left Al-Sadd on 19 May 2012 and joined Club Cerro Porteño after just 24 hours.

On 26 July 2013, he signed a two years contract with United Arab Emirates champions Al Ain to replace with Cosmin Olăroiu. 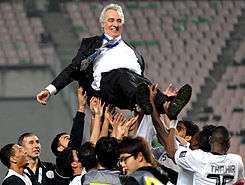