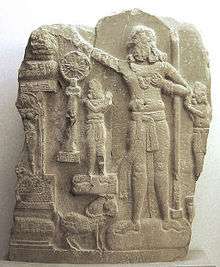 Chakravartin (Sanskrit cakravartin, Pali cakkavattin) is an ancient Indian term used to refer to an ideal universal ruler[1] who rules ethically and benevolently over the entire world. Such a ruler's reign is called sarvabhauma. It is a bahuvrīhi, figuratively meaning "whose wheels are moving", in the sense of "whose chariot is rolling everywhere without obstruction". It can also be analysed as an 'instrumental bahuvrīhi: "through whom the wheel is moving" in the meaning of "through whom the Dharmachakra ("Wheel of the Dharma) is turning" (most commonly used in Buddhism).

The first references to a cakravala cakravrtin appear in monuments from the time of the Maurya Empire (322–185 BCE), dedicated to Chandragupta Maurya and his grandson Ashoka. It has not been generally used for any other historic figure. In Buddhism, the chakravarti came to be considered the secular counterpart of a buddha. In general, the term applies to temporal as well as spiritual kingship and leadership, particularly in Buddhism and Jainism. In Hinduism, the term generally denotes a powerful ruler whose dominion extended to the entire earth.

The "Chakravarti Rajya" did not mean the rule of any one emperor or of one imperialist country. What it meant was a sort of world federation in which the central power would be in the hands of a council composed of the representatives.[2]

During the each motion of the half-cycle of the wheel of time, 63 Salakapurusa or 63 illustrious men, consisting of the 12 Chakravartin regularly appear.[3] The Jain cosmology or legendary history is basically a compilation of the deeds of these illustrious men. As per Jain cosmology, Chakravartins are Universal Monarchs or World Conquerors. Golden in complexion, they all belonged to the Kasyapa gotra. The mother of a Chakravartin sees some dreams at the time of conception. A chakravartin is considered an ideal human being endowed with thirty-two major signs of excellence and many minor signs of excellence.

In Jainism, a chakravartin was characterised by possession of saptaratna, or "seven jewels":

Some lists cite navaratna or "nine jewels" instead, adding "prime minister" and "son".

The Cakravarti King in Buddhism 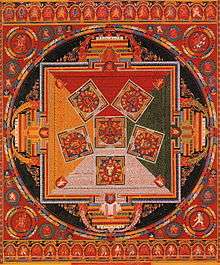 Tibetan mandala of the six chakravartis

The concept of the cakravarti existed in Buddhism as well as in Jainism. The Buddhist Mahāvastu (1.259f) and the Divyāvadāna, as well as the Theravadin Milindapañha, describe the marks of the cakravarti as ruler: uṣṇīṣa, chhatra "parasol", "horn jewel" or vajra, whisk and sandals. These were the marks of the kshatriya. Plastic art of early Mahayana Buddhism illustrates bodhisattvas in a form called uṣṇīṣin "wearing a turban/hair binding", wielding the mudras for "nonviolent cakravarti rule".[7]

A Cakravarti King is a king who rules the all of the great continents (Pubbavideha, Jambudipa, Aparagoyana, Uttarakuru) of earth. The King wins all of the continents with peace. Since he's virtuous, seven miracle treasures appear including a large wheel spinning (Chakraratnaya) in the sky. King and his army can travel anywhere with that spinning wheel in the sky. He travels over the world and teaches all kings how to rule with peace Dasavidha-rājadhamma. He can travel to the lower heaven realms with the power of Chakraratnaya if he wants. Cakravarti king only appears when humans are virtuous and long lived. Jataka tales a part of the Pali Canon describe about Buddhist Cakravarti Kings.