Champat Rai Jain (1867-1942) was an influential Jain writer and comparative religion scholar of the 20th century. He visited various European countries to give lectures on Jainism and comparative religion. He was conferred with the title Vidhya-Varidhi (lit. Ocean of Wisdom) by Bharata Dharma Mahamandal (The India-Religious Association). 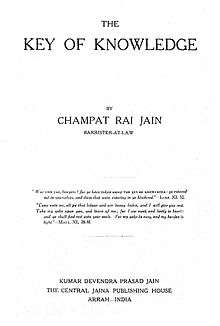 Book cover of "The Key of Knowledge"

"Key of Knowledge", a book authored by Champat Rai Jain, was published in 1915. It was widely acclaimed among the scholars.[15]

The Pioneer (on March 12, 1916) wrote: "Mr. Rai's book is singularly lucid and readable and not a word in it could give umbrage to the most sensitive votaries of the creeds discussed."

"The author's learning and breadth of outlook entitle him to patient hearing......"- The East and West—March (1916)

Vijay K. Jain, a modern Jainism scholar in the Preface of his book From IIM-Ahmedabad To Happines wrote:[5]

Many illuminated works and teachings of great thinkers and sages of the past have repeatedly told us that we need to be able to distinguish between valuable gems and valueless stones, both of which are scattered along our way. One such valuable gem that I could lay my hands on, about a decade ago, was that amazingly comprehensive yet precise treatise The Key of Knowledge, by Champat Rai Jain. The book, first published in 1915, true to its title, has timeless pearls of wisdom in each of its 900-plus pages; one has only to have patience, and develop appreciation and understanding to pick them up. No other work that I know of treats of the great issues that confront humanity with the same simplicity, charm, ease, authority and freedom. As could be expected from a Barrister-at-Law of that era, he was a brilliant grammarian and logician; but more than that, he was a great philosopher.