Classification of the six eternal substances

Dravya (Hindi: द्रव्य) is a term used to refer a substance. According to the Jain philosophy, the universe is made up of six eternal substances: sentient beings or souls (jīva), non-sentient substance or matter (pudgala), principle of motion (dharma), the principle of rest (adharma), space (ākāśa) and time (kāla).[1][2] The latter five are united as the ajiva (the non-living). As per the Sanskrit etymology, dravya means substances or entity, but it may also mean real or fundamental categories.[2]

Jain philosophers distinguish a substance from a body, or thing, by declaring the former as a simple element or reality while the latter as a compound of one or more substances or atoms. They claim that there can be a partial or total destruction of a body or thing, but no substance can ever be destroyed. [3]

According to Jain philosophy, this universe consists of infinite jivas or souls that are uncreated and always existing. There are two main categories of souls: unliberated mundane embodied souls that are still subject to transmigration and rebirths in this samsara due to karmic bondage and the liberated souls that are free from birth and death. All souls are intrinsically pure but are found in bondage with karma since beginningless time. A soul has to make efforts to eradicate the karmas attain its true and pure form.

The sentient substance (soul) is characterized by the function of understanding, is incorporeal, performs actions (doer), is co-extensive with its own body. It is the enjoyer (of its actions), located in the world of rebirth (samsara) (or) emancipated (moksa) (and) has the intrinsic movement upwards.
— Dravyasaṃgraha (2)

The qualities of the soul are chetana (consciousness) and upyoga (knowledge and perception). Though the soul experiences both birth and death, it is neither really destroyed nor created. Decay and origin refer respectively to the disappearing of one state and appearing of another state and these are merely the modes of the soul. Thus Jiva with its attributes and modes, roaming in samsara (universe), may lose its particular form and assume a new one. Again this form may be lost and the original acquired.[5]

Matter is classified as solid, liquid, gaseous, energy, fine Karmic materials and extra-fine matter i.e. ultimate particles. Paramāṇu or ultimate particle (atoms or sub-atomic particles) is the basic building block of all matter. It possesses at all times four qualities, namely, a color (varna), a taste (rasa), a smell (gandha), and a certain kind of palpability (sparsha, touch).[6] One of the qualities of the paramāṇu and pudgala is that of permanence and indestructibility. It combines and changes its modes but its basic qualities remain the same.[7] It cannot be created nor destroyed and the total amount of matter in the universe remains the same.

Dharma means the principles of Motion that pervade the entire universe. Dharma and Adharma are by themselves not motion or rest but mediate motion and rest in other bodies. Without Dharma motion is not possible. The medium of motion helps matter and the sentient that are prone to motion to move, like water (helps) fish. However, it does not set in motion those that do not move.[8]

Without adharma, rest and stability is not possible in the universe. The principle of rest helps matter and the sentient that are liable to stay without moving, like the shade helps travellers. It does not stabilize those that move.[9] According to Champat Rai Jain:

The necessity of Adharma as the accompanying cause of rest, that is, of cessation of motion will be clearly perceived by any one who will put to himself the question, how jīvas and bodies of matter support themselves when coming to rest from a state of motion. Obviously gravitation will not do, for that is concerned with the determination of the direction which a moving body may take...[10]

Kāla is a real entity according to Jainism and is said to be the cause of continuity and succession. Champat Rai Jain in his book "The Key of Knowledge wrote:[10]

...As a substance which assists other things in performing their ‘temporal’ gyrations, Time can be conceived only in the form of whirling posts. That these whirling posts, as we have called the units of Time, cannot, in any manner, be conceived as parts of the substances that revolve around them, is obvious from the fact that they are necessary for the continuance of all other substances, including souls and atoms of matter which are simple ultimate units, and cannot be imagined as carrying a pin each to revolve upon. Time must, therefore, be considered as a separate substance which assists other substances and things in their movements of continuity.
— Champat Rai Jain

Jaina philosophers call the substance of Time as Niścay Time to distinguish it from vyavhāra (practical) Time which is a measure of duration- hours, days and the like.[10] 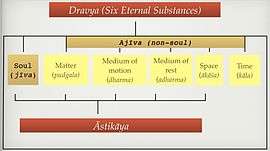 Chart showing the classification of dravya and astikaya

These substances have some common attributes or gunas such as:[14]

There are some specific attributes that distinguish the dravyas from each other:[14]