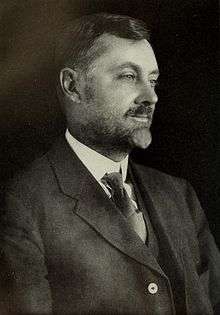 Charles Richard Crane (1858–1939) was a wealthy American businessman, heir to a large industrial fortune and connoisseur of Arab culture, a noted Arabist. His widespread business interests gave him entree into domestic and international political affairs where he enjoyed privileged access to many influential power brokers at the top levels of government. His special arena of interest was Eastern Europe and the Middle East.

He was the eldest son of plumbing parts mogul, Chicago manufacturer, Richard T. Crane. In the 1900s, he brought Thomas Masaryk, Maksim Kovalevsky and Pavel Milyukov to lecture at the University of Chicago. After meeting Masaryk, he became interested in Slavic nationalism and sponsored The Slav Epic paintings by Alphonse Mucha[1] When Mucha designed the Czechoslovak bills, he used a previous portrait of Josephine Crane Bradley as Slavia for the 100 koruna bill.[1]

President William Howard Taft appointed Crane minister to China on July 16, 1909,[2] but on the eve of his departure to his post on October 4, 1909, he was recalled to Washington and forced to resign under pressure by U.S. Secretary of State Philander C. Knox,[3] who held him responsible for the publication in a Chicago newspaper of the U.S. government's objections to two recent treaties between Japan and China.[4][5] 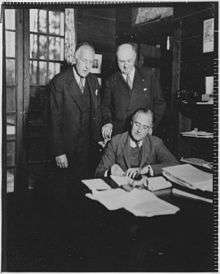 Crane contributed heavily to Woodrow Wilson's 1912 election campaign. Wilson rewarded Crane with appointments to the 1917 Special Diplomatic Commission to Russia, known as the Root Commission, as a member of the American Section of the Paris Peace Conference, and to the 1919 Inter-Allied Commission on Mandates in Turkey that became known as the King-Crane Commission. While the commission was originally proposed by the U.S. to develop an international consensus on the future make up and status of post-World War I Middle East nations, the commission quickly became a U.S.-only sponsored effort. With the appointment of Crane as co-head of the commission, it set about to issue a report to inform U.S. policy makers.[6] In respect to the creation of a Jewish state in the Middle East, the report cautioned "Not only you as president but the American people as a whole should realize that if the American government decided to support the establishment of a Jewish state in Palestine, they are committing the American people to the use of force in that area, since only by force can a Jewish state in Palestine be established or maintained." Crane opposed the establishment of a Jewish state in the Middle East.[7] He was a passionate spokesman for the independence of the Arab states.[8]

In 1925 Crane founded the New York-based Institute of Current World Affairs. The institute employed field representatives in Mexico, Jerusalem, and occasionally Moscow. These representatives compiled regular reports on developments in their regions, and shared their expertise during ICWA-sponsored lecture tours of major U.S. universities. The reports were also made available to the U.S. State Department.

In 1931,Crane helped finance the first explorations for oil in Saudi Arabia and Yemen. He was instrumental in gaining the American oil concession there.[9]

Crane was virulently anti-Semitic. He expressed his animosity towards Jews in meetings with his business and diplomatic contacts as well as in social situations. When Franklin Roosevelt appointed William E. Dodd American ambassador to Germany in 1933, Crane wrote Dodd a letter of congratulation that told him:[10]

The Jews, after winning the war, galloping along at a swift pace, getting Russia, England and Palestine, being in the act of trying to seize Germany, too, and meeting their first real rebuff, have gone plumb crazy and are deluging the world—particularly easy America—with anti-German propaganda. I strongly advise you to resist every social invitation.

Crane admired Adolf Hitler and had no objection to how the Nazis were treating Germany's Jews. He told Dodd: "Let Hitler have his way."[10]