Philander Chase Knox (May 6, 1853 – October 12, 1921) was an American lawyer, bank director and politician who served as United States Attorney General (1901–1904), a Senator from Pennsylvania (1904–1909, 1917–1921) and Secretary of State (1909–1913). He served in the Cabinet under three presidents. Active in law in Pittsburgh, Pennsylvania in the partnership known as Knox and Reed, Knox was also one of several founders of the city of Monessen in the state, where a street is named for him. With the industrialists Henry Clay Frick and Andrew Mellon, he was a director of the Pittsburgh National Bank of Commerce.[1] 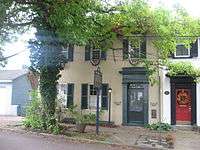 Philander Chase Knox was born in Brownsville, Pennsylvania, one of nine children of Rebecca (née Page) and David S. Knox.[2] His father was a banker and his mother was active in philanthropic and social organizations. He went to private primary and secondary schools attended by children of the affluent. Knox attended Mount Union College, where he graduated in 1872 with a bachelor of arts degree. While there, he formed a lifelong friendship with William McKinley, the future U.S. President, who at the time was a local district attorney. Knox attended the West Virginia University College of Law, graduating in 1875.

In 1880, Knox married Lillian "Lillie" Smith, daughter of Mr. and Mrs. Andrew Darsie Smith. Her father was a partner in a steel company known as Smith, Sutton and Co. The company eventually became a part of Crucible Steel. Knox and his wife had several children, including Hugh Knox. His extended relatives include a nephew, "Billy" Knox.

Knox was admitted to the bar in 1875 and practiced in Pittsburgh. From 1876-77 he was Assistant United States Attorney for the Western District of Pennsylvania. Knox became a leading Pittsburgh attorney in partnership with James Hay Reed, their firm being Knox and Reed (now Reed Smith LLP). In 1897 Knox became President of the Pennsylvania Bar Association. Along with Jesse H. Lippencott, a fellow member of an elite hunting club (see South Fork below), Knox served as a director of the Fifth National Bank of Pittsburgh. With Henry Clay Frick and Andrew Mellon, he was a director of the Pittsburgh National Bank of Commerce. As counsel for the Carnegie Steel Company, Knox took a prominent part in organizing the United States Steel Corporation in 1901.

Knox was a member of the South Fork Fishing and Hunting Club, which had a clubhouse upriver of Johnstown, Pennsylvania. It maintained an earthen dam for a lake by the club, which was stocked for fishing. The dam failed in May 1889, causing the Johnstown Flood and severe losses of life and property downriver. When word of the dam's failure was telegraphed to Pittsburgh, Frick and other members of the South Fork Club gathered to form the Pittsburgh Relief Committee for assistance to the flood victims. They decided together to refrain from speaking publicly about the club or the flood. This strategy was a success, and Knox and Reed were able to fend off all lawsuits that would have placed blame upon the Club’s members.

Knox was also a member of the elite Duquesne Club in Pittsburgh.

Knox's nickname was “Sleepy Phil,” as he was said to have dozed off during board meetings, or because he was cross-eyed.

In 1901 Knox was appointed as US Attorney General by President William McKinley and was re-appointed by President Theodore Roosevelt. He served until 1904. While serving President Roosevelt, Knox worked hard to implement the concept of Dollar Diplomacy.

He told President Roosevelt: "I think, it would be better to keep your action free from any taint of legality,"[3] made in regard to the construction of the Panama Canal.

In June 1904, Knox was appointed by Governor Samuel W. Pennypacker of Pennsylvania to fill the unexpired term of the late Matthew S. Quay in the United States Senate. In 1905, he was elected by the state legislature to fill the remainder of the full term for the US Senate seat (to 1909).

Knox made an unsuccessful bid for the Republican Party nomination in the 1908 U.S. presidential election.

In February 1909, President William Howard Taft nominated Senator Knox to be Secretary of State.[4] He was at first found to be constitutionally ineligible, because Congress had increased the salary for the post during his Senate term, thus violating the Ineligibility Clause.[5] In particular, Knox had been elected to serve the term from March 4, 1905, to March 4, 1911. During debate on legislation approved on February 26, 1907, as well as debate beginning on March 4, 1908, he had consistently supported pay raises for the Cabinet, which were eventually instituted for the 1908 fiscal calendar.[5][6] The discovery of the constitutional complication came as a surprise after President-elect Taft had announced his intention to nominate Knox.[5]

The Senate Judiciary Committee proposed the remedy of resetting the salary to its pre-service level, and the Senate passed it unanimously on February 11, 1909.[6] Members of the U.S. House of Representatives mounted more opposition to the relief measure and defeated it once. After a special procedural rule was applied, the measure was passed by a 173–115 vote.[7] On March 4, 1909, the salary of the Secretary of State position was reverted from $12,000 to $8,000, and Knox took office on March 6.[5][6] Later known as the "Saxbe fix", such legislation has been passed in a number of similar circumstances.

Knox served as Secretary of State in Taft's cabinet until March 5, 1913. As Secretary of State, he reorganized the Department on a divisional basis, extended the merit system to the Diplomatic Service up to the grade of chief of mission, pursued a policy of encouraging and protecting American investments abroad, declared the ratification of the Sixteenth Amendment, and accomplished the settlement of controversies related to activities in the Bering Sea and the North Atlantic fisheries.

Under Taft the focus of foreign policy was the encouragement and protection of U.S. investments abroad called Dollar diplomacy. This was first applied in 1909, in a failed attempt to help China assume ownership of the Manchurian railways. Tangible proof of Knox's efforts in this attempt can be seen today in Washington, D.C.: the Chinese government gave him two thousand cherry trees that still blossom each spring. More successful attempts at dollar diplomacy were eventually made in Nicaragua, Cuba and Venezuela. Knox felt that not only was the goal of diplomacy to improve financial opportunities, but also to use private capital to further U.S. interests overseas. In spite of successes, "dollar diplomacy" failed to counteract economic instability and the tide of revolution in places like Mexico, the Dominican Republic, Nicaragua, and China.[8]

Return to the Senate 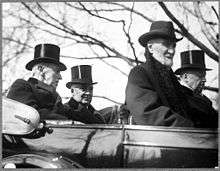 Following his term of office, Knox resumed the practice of law in Pittsburgh. In 1916, Knox was elected by popular vote to the Senate from Pennsylvania for the first time, after passage of the Seventeenth Amendment providing for such popular elections. He served from 1917 until his death in 1921. While a Senator, he was highly critical of the Treaty of Versailles ending World War I, saying "this Treaty does not spell peace but war — war more woeful and devastating than the one we have but now closed". [9]

At the 1920 Republican National Convention, Knox was considered a potential compromise candidate who could unite the progressive and conservative factions of the party. Many thought that California Senator Hiram Johnson would release his delegates to back his friend Knox, but Johnson never did. Warren G. Harding instead emerged as the compromise candidate, and Harding went on to win the 1920 election.[10]

In April 1921 he introduced a Senate resolution to bring a formal end to American involvement in World War I. It was combined with a similar House resolution to create the Knox–Porter Resolution, signed by President Warren G. Harding on July 2.[11]