Chinese Garden (Chinese: 裕华园), is a park in Jurong East, Singapore. Built in 1975 by the JTC Corporation and designed by Prof. Yuen-chen Yu, an architect from Taiwan, the Chinese Garden’s concept is based on Chinese gardening art. The main characteristic is the integration of splendid architectural features with the natural environment. The Chinese Garden is modeled along the northern Chinese imperial style of architecture and landscaping.[1] It is located next to Chinese Garden MRT Station and connected to the adjacent Japanese Garden by a bridge. Along with the aforementioned Japanese Garden, the two gardens are collectively known as the Jurong Gardens.

It is a Chinese belief that the lion is the animal representing authority and fealty. Thus, the cloudy-grained marble stone lions at the gates of the Chinese Garden – typically Chinese in style – guarding the main gates of the Garden. They are skilfully sculptured from Taiwan-imported marble stone.

The bridge as seen from Japanese Garden side

In the art of Chinese gardens, bridges play a critical role and the most important structures may denote the character.

The ‘Bai Hong Qiao’ (the white rainbow, 13-Arch Bridge) at the Garden follows the style of the 17-Arch Bridge at the Summer Palace in Peking. Although the bridge at the Chinese Garden is shorter than the famous 17-Arch Bridge, it still maintains the magnificence and brilliance in architectural design, representing a typical beautiful Chinese bridge.

The Rainbow Bridge is the finish line of The Amazing Race Asia 2.

It is a renowned and typical Chinese arch building. The magnificent and grandiose form has made it very popular for picture-taking.

Inside the main arch building, there are two courtyards, namely the “Early Spring Courtyard” and “Garden Courtyard”. Also, there is a fishpond in the centre which is named the “Fishes Paradise”.

A famous traditional feature of Chinese architecture is the Stone Boat structure. Its unique design and splendid architectural beauty is a fine art which has long been praised by people throughout the world.

The style of ‘Yao-Yueh Fang’ (the Stone Boat) in the Chinese Garden is based on the Peking style, but there are some adaptations in the design and the materials used here – as a result of which – a more beautiful and grandiose form is obtained.

The ‘Ming Hsiang Hsieh’ (Tea House) is a miniature structure following the style of the elaborate, winding gallery at the Summer Palace. This meandering design is a characteristic and graceful Chinese architectural feature. 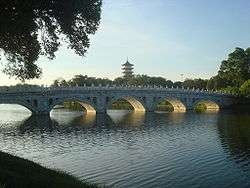 The bridge connecting the Chinese Garden and Japanese Garden islands; the pagoda is seen rising behind it

In ancient times, the pagoda, originally a simple tower located beside a temple, was used for the keeping of human bones by Buddhists. Later, with improvements in architectural skills, incorporated with the traditional art of building, the pagoda was developed into a structure of striking architectural beauty.

The ‘Ru Yun T’a) (7-storey pagoda) is situated on a small hill in the Chinese Garden. Its typical pagoda design follows the style of Ling Ku Temple Pagoda at Nanjing.

The Chinese Pavilion, Plateau and Tower represent the soul of the Chinese gardening art. The artistic features, typical of Chinese architecture have long been appreciated by man. The arrangement of these structures is very important and one of the essential rules of the structural arrangement is that the position of each structure must be balanced by its height and size. Further, the building must be linked with plants, rocks, a winding stream and footpaths so as to create a poetic scene.

The design of the four pavilions at the Chinese Garden is based on the style of Northern Chinese Pavilions, and decorated to blend harmoniously with the Garden.

Opened in June 1992, the Suzhou-style Bonsai Garden cost an estimate $3.8 million to build. This 5,800-square-metre garden with Suzhou-style buildings (incorporating a main hall of 50 square metres) and landscape houses a collection of over 2,000 bonsais imported from China and other parts of the world.

The Bonsai Garden has since taken on a new look. Newly revitalised, after spending an estimate of another $500,000 - the Bonsai Garden is a beauty that must be seen to be believed. It is designed as a largest Suzhou-style Bonsai garden of its kind outside of China.

A Bonsai Training Centre has been launched. The public are encouraged to sign up for the course, which will be taught by our resident Bonsai experts from Shanghai and Suzhou (China). They will teach on how to prune and care for Bonsais and how to appreciate the beauty of this unique artistry.

The newest addition to the Chinese Garden family is the Garden of Abundance. The original name of this garden is the Zodiac & Pomegranate Garden, derived from the elements used for the construction of the garden.

It consists of pomegranate trees, the 12 Chinese Zodiac animals sculpture, a sundial, stone bridges and planting of materials, which have meanings of longevity, abundance and fulfilment. Hence the name Garden of Abundance was selected.

100-year-old pomegranate trees from Shantung, China have been carefully planted into this new garden. It sits among the 12 Chinese Zodiac Animal sculptures. This creative concept of Chinese Garden is a new scenic spot designed according to Chinese tradition and folk culture. And most importantly, the theme and design of this garden bestows sincere wishes dedicated to the visitor.

The Live Turtle and Tortoise Museum exhibits different species turtles and tortoises. A highlight of the museum is it exhibits exotic types of tortoises, such as tortoises with 2 heads and 6 legs - where only one in every few million of these rare species will survive. 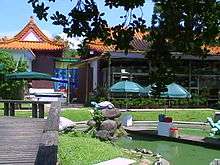 The Live Turtle and Tortoise Museum

This entrance was specially constructed in conjunction with the Chinese Garden MRT station, to ensure easy access for pedestrians visiting the gardens. Upon approaching the garden, there is a Red Bridge that will lead you in. This Red Bridge symbolises good luck and is an auspicious colour for the Chinese. Two stone lions, welcoming the visitors before entering the garden, also guard the entrance.

JTC Corporation is planning a year-long "redecoration and refurbishment" project starting at the end of 2014. The areas to be repaired include the main entrance plaza, the pavilions, the iconic pagodas, the Stone Boat and footpaths. The repair works involve removing wood that has rotted or become infested by termites. These also include patching up spalling concrete and cracked walls, replacing broken and loose roof tiles, stopping water leakage, as well as replacing old electrical wiring, timber footpaths or rusted fittings.[1]