Pulau Ubin, also called Ubin Island, is an island situated in the north east of Singapore, to the west of Pulau Tekong. Granite quarrying supported a few thousand settlers on Pulau Ubin in the 1960s, but only about a hundred villagers live there today. It is one of the last rural areas to be found in Singapore, with an abundance of natural flora and fauna. The island forms part of the Ubin–Khatib Important Bird Area (IBA), identified as such by BirdLife International because it supports significant numbers of visiting and resident birds, some of which are threatened.[2] 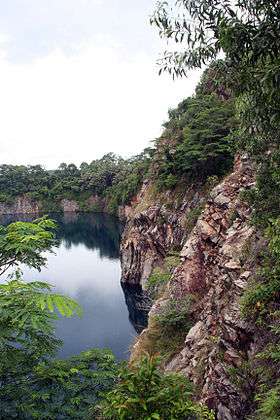 An abandoned Quarry on Pulau Ubin.

The name Pulau Ubin literally means "Granite Island" in Malay, which explains the many abandoned granite quarries there. Pulau means "island", and Ubin is said to be a Javanese term for "squared stone". To the Malays, the island is also known as Pulau Batu Ubin, or "Granite Stone Island". The rocks on the island were used to make floor tiles in the past and were called Jubin, which was then shortened to Ubin.

The island is known as tsioh sua in the Taiwanese Romanization of Hokkien, which means "stone hill". The highest point is Bukit Puaka (Puaka Hill) at a height of 75 m.[3]

Legend has it that Pulau Ubin was formed when three animals from Singapore (a frog, a pig and an elephant) challenged each other to a race to reach the shores of Johor. The animals that failed would turn to stone. All three came across many difficulties and were unable to reach the shores of Johor. Therefore, the elephant and pig together turned into Pulau Ubin whilst the frog became Pulau Sekudu or Frog Island.[4]

Pulau Ubin first appeared on map in an 1828 sketch of the Island of Singapore as Pulo Obin and in Franklin and Jackson's map as Po. Ubin.

Since the British founding of Singapore, the island has been known for its granite. The numerous granite quarries on the island supply the local construction industry. The granite outcrops are particularly spectacular from the sea because their grooves and fluted sides create furrows and ridges on each granite rock slab. These features are captured in John Turnbull Thomson's 1850 painting — Grooved stones on Pulo Ubin near Singapore.

The granite from Pulau Ubin was used in the construction of Horsburgh Lighthouse. Tongkangs ferried the huge rock blocks (30 by 20 feet) from the island to Pedra Branca, the site of the lighthouse, in 1850 and 1851.

Later, the granite was also used to build the Singapore-Johor Causeway. Most of the quarries are not in operation today and are being slowly recolonised by vegetation or filled with water. Apart from quarrying, farming and fishing were the principal occupations of the inhabitants of the island in the past. It is also called Selat Tebrau (tebrau is a kind of large fish).

In the 1970s as the granite quarries closed down and jobs dwindled, residents began leaving.[5]

In the 1880s, a number of Malays led by Endut Senin, from the Kallang River were said to have moved to the island that began the thriving Malay community on the island.

Many of the former kampongs on Pulau Ubin were either named after the first person who settled in the kampong or by some feature in the area. Kampong Leman was named by Leman; Kampong Cik Jawa by a Singaporean named Jawa; and Kampong Jelutong from people from Changi and from its jelutong trees.

During the 1950s and 1970s, there were 2,000 people living on the island[6] and the Bin Kiang School was established in 1952 for the increasing number of children, from money donated by the resident Chinese. Lessons prior to this were conducted on the village wayang stage. With a student population that once numbered 400, enrolment fell as the Singapore mainland developed. The school closed in 1985, and was demolished on 2 April 2000. There was also a private Malay school around 1956 at Kampung Melayu, which closed in the late 1970s.[7]

Pulau Ubin was found to be suitable for the construction of several campsites. Outward Bound Singapore (OBS) was established in 1967 at Pulau Ubin, by Dr Goh Keng Swee, while the National Police Cadet Corps (NPCC) opened its 25-hectare site camp located between Kampung Bahru and Kampung Noordin.[8] The camp is called Camp Resilience where Secondary 2 and 3 NPCC cadets have a 3-day 2 night stay for training. Secondary 2 NPCC cadets go to Adventure Training Camp (ATC) while Secondary 3 NPCC cadets go to Survival Training Camp (STC). lt was opened officially on 10 August 2004.[9]

On 3 June 2005, the Singapore Government ordered that all the farmers rearing poultry on the island were to ship them to mainland Singapore and rear them in government-approved farms by 17 June 2005, in the wake of the avian influenza. In exchange, the local inhabitants were offered HDB government housing packages, although they could choose to live on the island.

As of today, there are only a few people living on the island.[6] 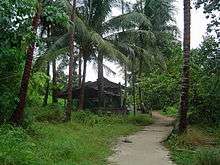 Pulau Ubin is one of the few areas in Singapore that is largely free from urban development. 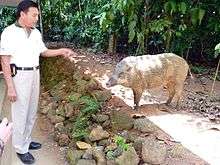 A tame wild boar on Pulau Ubin and its keeper.

Pulau Ubin is one of the last areas in Singapore that has been preserved from urban development, concrete buildings and tarmac roads.

The Singapore Government's development projects on the island in the last few years has been controversial and debate has been able to find its way through government-controlled media. Their main ideas is that the East West Line could be extended to Pulau Ubin from Pasir Ris. Although the government has highlighted the area for future development, the island is unlikely to be urbanised because many foreign tourists visit Ubin and it has become a tourist attraction.

Though recent government action has been limited to widening the paths for bicycles, building shelters for trekkers and other facilities for the growing number of visitors, it is already discreetly changing the face and nature of Pulau Ubin from untouched to planned, and paving the way for further developments.

In 2007, the Singapore Government decided to reuse the Granite Quarry in Pulau Ubin because Indonesia might restrict exports of granite to Singapore.

The future of the island is in the hands of Singapore Government, which may postpone its development in order to concentrate on re-developing existing space on Singapore island and nearby Pulau Tekong. For now, Pulau Ubin is a haven as a former rural way of life will most likely disappear with its last "kampung" generation passing.

There are a few tarmac roads on Pulau Ubin but most roads are gravel. There are a number of minibuses, jeeps and motorbikes on the island, all bearing PU (for Pulau Ubin) numbered plates.

Schools visit Pulau Ubin for overnight school trips. Although the locals try to keep the island un-urbanized, they need some small boosts of money to support them.

The Oriental pied hornbill that has re-established itself in Singapore.

The National Biodiversity Centre, in partnership with Wildlife Reserves Singapore, Nanyang Technological University, and researchers Marc Cremades and Ng Soon Chye, implemented the Hornbill Conservation Project to aid in the breeding and recovery of the Oriental pied hornbill (Anthracoceros albirostris) which had previously became extinct in Singapore but has since started to re-establish itself in places like Pulau Ubin and Changi.[10][11]

Hornbills require tree cavities to nest in. However, tree cavities of sufficient size to accommodate the female hornbill and her young are not common in Singapore. The implementation of artificial nest boxes at Pulau Ubin and Changi have been successful and video cameras are even installed within the nest boxes to provide a better understanding of the behavioural and feeding patterns of these birds.

Since May 2009, the National Biodiversity Centre, together with volunteers from National Parks Board and nature groups such as Wild Singapore and TeamSeaGrass, initiated a project to monitor identified populations of seahorse (Hippocampus kuda) and pipefish (Syngnathoides biaculeatus) in several locations including Pulau Ubin for conservation management purposes. The data gathered will help to estimate the population size, growth rate of individuals and track their movements in their natural habitats.

Although the island attracted attention for development and planning only in recent years, Singaporean visitors have been visiting Pulau Ubin for summer camps and outdoor activities for many years.

With growing attention and interest in nature, visitors to Pulau Ubin has increased over the years.

One of the current popular tourist attractions on the island is Chek Jawa. A previous coral reef 5000 years ago, Chek Jawa can be said to be virtually unspoilt, with a variety of marine wildlife comparable to other islands, such as sea hares, sea squirts, octopuses, starfishes, sand dollars, fishes, sponges, cuttlefishes and nudibranches.

A boardwalk runs through the mangrove, allowing visitors to observe the plant and marine life at close range. During low tide, a limited number of people are allowed to walk on the tidal flats. 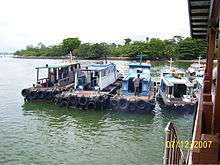 Visitors may travel to Pulau Ubin from the main island of Singapore via a 10-minute bumboat ride from the Changi Point Ferry Terminal (previously known as the Changi Village jetty). In 2008 the one-way ticket price was increased from S$2.00 to S$2.50 per passenger. It was further increased to S$3.00 from 7 September 2015 onwards. Every bumboat can carry 12 passengers and the captain will wait till his boat has reached the maximum capacity. People who do not want to wait can pay S$36.00 for the whole bumboat and leave without waiting. 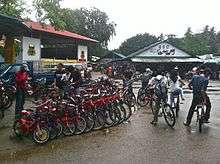 Most of the village consists of cycle shops and cafes

The rental price for bicycles range anywhere from S$2.00 to S$20.00 (for the entire day) depending on the condition of the bike, number of gears etc.[12]

Pulau Ubin is home to one of Singapore's mountain bike trails, Ketam Mountain Bike Park which was built in 2007.[13] The trail is approximately 8 kilometers long and features a wide range of terrain ranging from open meadows to thick jungle. There are numerous steep but short climbs and descents. The trail is well-marked with signs indicating the difficulty level of each section.

The vast majority of the mountain bikers that ride this trail bring their own bike, although the rental bikes on the island can also be used. Besides adventurous mountain biking, Pulau Ubin has a lot to offer to recreational mountain bikers with a wide selection of bikes to that can be rented upon arrival. By cruising around the island one can stop by beautiful lakes and other natural spots. It is a great break away from the big and busy city of Singapore.