The Summer Palace (Chinese: 頤和園; pinyin: Yíhéyuán), is a vast ensemble of lakes, gardens and palaces in Beijing, China. It serves as a popular tourist destination and recreational park. Mainly dominated by Longevity Hill (万寿山; 萬壽山; Wànshòu Shān) and Kunming Lake (昆明湖; Kūnmíng Hú), it covers an expanse of 2.9 square kilometres (1.1 sq mi), three-quarters of which is water.

Longevity Hill is about 60 metres (200 feet) high and has many buildings positioned in sequence. The front hill is rich with splendid halls and pavilions, while the back hill, in sharp contrast, is quiet with natural beauty. The central Kunming Lake, covering 2.2 square kilometres (540 acres), was entirely man-made and the excavated soil was used to build Longevity Hill.

In December 1998, UNESCO included the Summer Palace on its World Heritage List. It declared the Summer Palace "a masterpiece of Chinese landscape garden design. The natural landscape of hills and open water is combined with artificial features such as pavilions, halls, palaces, temples and bridges to form a harmonious ensemble of outstanding aesthetic value".

The origins of the Summer Palace date back to the Jurchen-led Jin dynasty in 1153, when the fourth ruler, Wanyan Liang (r. 1150–1161), moved the Jin capital from Huining Prefecture (in present-day Acheng District, Harbin, Heilongjiang) to Yanjing (present-day Beijing). He ordered the construction of a palace in the Fragrant Hills and Jade Spring Hill in the northwest of Beijing.

Around 1271, after the Yuan dynasty established its capital in Khanbaliq (present-day Beijing), the engineer Guo Shoujing initiated a waterworks project to direct the water from Shenshan Spring (神山泉) in Baifu Village (白浮村), Changping into the Western Lake (西湖), which would later become Kunming Lake. Guo's aim was to create a water reservoir that would ensure a stable water supply for the palace.

In 1494, the Hongzhi Emperor (r. 1487–1505) of the Ming dynasty had a Yuanjing Temple (圓靜寺) built for his wet nurse, Lady Luo, in front of Jar Hill (瓮山), which was later renamed Longevity Hill. The temple fell into disrepair over the years and was abandoned, and the area around the hill became lush with vegetation. The Zhengde Emperor (r. 1505–21), who succeeded the Hongzhi Emperor, built a palace on the banks of the Western Lake and turned the area into an imperial garden. He renamed Jar Hill, "Golden Hill" (金山) and named the lake "Golden Sea" (金海). Both the Zhengde Emperor and the Wanli Emperor (r. 1572–1620) enjoyed taking boat rides on the lake. During the reign of the Tianqi Emperor (r. 1620–27), the court eunuch Wei Zhongxian took the imperial garden as his personal property.

In the early Qing dynasty, Jar Hill served as the site for horse stables in the imperial palace. Eunuchs who committed offences were sent there to weed and cut grass.

In the beginning of the reign of the Qianlong Emperor (r. 1735-1796), many imperial gardens were built in the area around present-day Beijing's Haidian District and accordingly, water consumption increased tremendously. At the time, much of the water stored in the Western Lake came from the freshwater spring on Jade Spring Hill, while a fraction came from the Wanquan River (萬泉河). Any disruption of the water flow from Jade Spring Hill would affect the capital's water transport and water supply systems.

Around 1749, the Qianlong Emperor decided to build a palace in the vicinity of Jar Hill and the Western Lake to celebrate the 60th birthday of his mother, Empress Dowager Chongqing. In the name of improving the capital's waterworks system, he ordered the Western Lake to be expanded further west to create two more lakes, Gaoshui Lake (高水湖) and Yangshui Lake (養水湖). The three lakes served not only as a reservoir for the imperial gardens, but also a source of water for the surrounding agricultural areas. The Qianlong Emperor collectively named the three lakes "Kunming Lake" after the Kunming Pool (昆明池) constructed by Emperor Wu (r. 141–187 BCE) in the Han dynasty for the training of his navy. The earth excavated from the expansion of Kunming Lake was used to enlarge Jar Hill, which was renamed "Longevity Hill". The Summer Palace, whose construction was completed in 1764 at a cost of over 4.8 million silver taels, was first named "Qingyiyuan" (清漪園; "Gardens of Clear Ripples"").

The design of the Summer Palace was based on a legend in Chinese mythology about three divine mountains in the East Sea, namely Penglai, Fangzhang (方丈) and Yingzhou (瀛洲). The three islands in Kunming Lake – Nanhu Island (南湖島), Tuancheng Island (團城島) and Zaojiantang Island (藻鑒堂島) – were built to represent the three mountains, while the lake itself was based on a blueprint of the West Lake in Hangzhou. Besides, many architectural features in the palace were also built to resemble or imitate various attractions around China. For example: the Phoenix Pier (鳳凰墩) represented Lake Tai; the Jingming Tower (景明樓) resembled Yueyang Tower, Hunan; the Wangchan Pavilion (望蟾閣) resembled Yellow Crane Tower; the shopping streets were designed to imitate those in Suzhou and Yangzhou. The centrepiece of the Summer Palace was the "Great Temple of Gratitude and Longevity" (大報恩延壽寺). There was also a Long Corridor more than 700 metres long which was furnished with artistic decorations. As the palace was not equipped with facilities for long-term staying and daily administration of state affairs, the Qianlong Emperor hardly lived there and only remained there for the day whenever he visited it.

As the Qing Empire started declining after the reign of the Daoguang Emperor (r. 1820–1850), the Summer Palace gradually became more neglected and the architectural features on the three islands were ordered to be dismantled because the costs of maintenance were too high.

In 1860, the French and British looted the Summer Palace at the end of the Second Opium War and on October 18, 1860 the British burned down the nearby Old Summer Palace (Yuanmingyuan). The destruction of the palace was ordered by Lord Elgin, the British High Commissioner to China, and was undertaken in response to the torture and killing of two British envoys, a journalist for The Times, and their escorts. The destruction of large parts of the Summer Palace still evokes strong emotions among some people in China.[1]

Between 1884–95, during the reign of the Guangxu Emperor (r. 1875–1908), Empress Dowager Cixi ordered 22 million silver taels,[2] originally designated for upgrading the Qing navy (the Beiyang Fleet), to be used for reconstructing and enlarging the Summer Palace to celebrate her 60th birthday. As the funds were limited, the construction works were concentrated on the buildings in front of Longevity Hill and the dams around Kunming Lake. The Summer Palace was also given its present-day Chinese name, "Yiheyuan" (頤和園), in 1888.

In 1900, towards the end of the Boxer Rebellion, the Summer Palace suffered damaged again when the forces of the Eight-Nation Alliance destroyed the imperial gardens and seized many artifacts stored in the palace. The palace was restored two years later.

In 1912, following the abdication of Puyi, the Last Emperor, the Summer Palace became the private property of the former imperial family of the Qing Empire. Two years later, the Summer Palace was opened to the public and entry tickets were sold. In 1924, after Puyi was expelled from the Forbidden City by the warlord Feng Yuxiang, the Beijing municipal government took charge of administrating the Summer Palace and turned it into a public park.

After 1949, the Summer Palace briefly housed the Central Party School of the Communist Party of China. Many of Mao Zedong's friends and key figures in the Communist Party, such as Liu Yazi and Jiang Qing, also lived there. Since 1953, many major restoration and renovation works have been done on the Summer Palace, which is now open to the public as a tourist attraction and park.

In November 1998, the Summer Palace was designated a World Heritage Site by UNESCO. Towards the end of 2006, the Chinese government also started distributing commemorative coins to celebrate the Summer Palace as a cultural relic of the world. 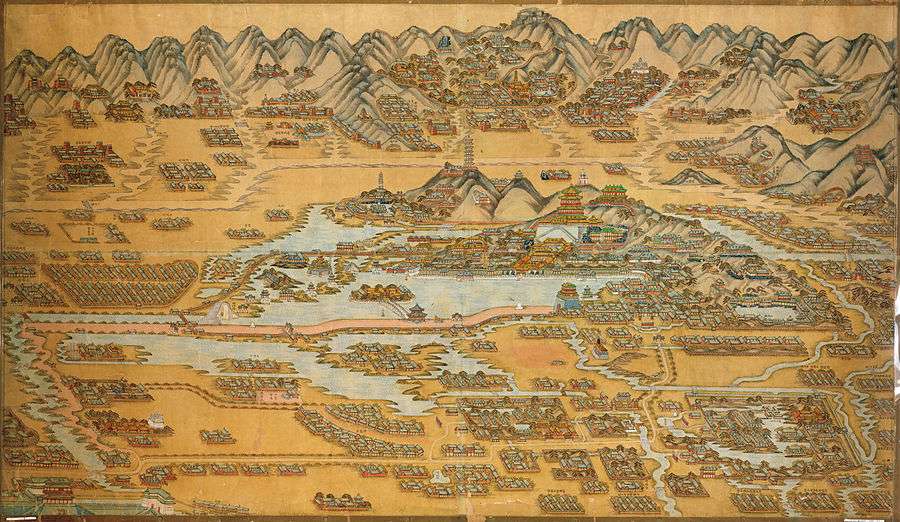 The entire Summer Palace is centred around Longevity Hill and Kunming Lake, with the latter covering about three quarters of the area. Most of the important buildings were built along the north–south axis of Longevity Hill, which is divided into the front hill and the back hill. There are three small islands within Kunming Lake: Nanhu Island, Zaojiantang Island and Zhijingge Island. The West Dam of Kunming Lake divides the lake into two. The East Dam was constructed during the reign of the Guangxu Emperor. The attractions in the Summer Palace may be divided into six different sections or scenic areas: the Halls, Longevity Hill, Kunming Lake, the Farming and Weaving Picture Scenic Area, the Long Corridor, and the Central Axis area. 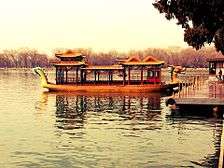