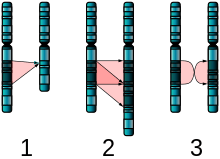 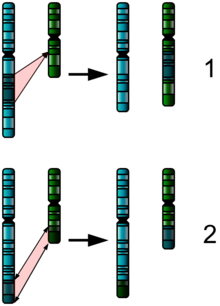 This is called aneuploidy (an abnormal number of chromosomes), and occurs when an individual either is missing a chromosome from a pair (monosomy) or has more than two chromosomes of a pair (trisomy, tetrasomy, etc.).

In humans, an example of a condition caused by a numerical anomaly is Down Syndrome, also known as Trisomy 21 (an individual with Down Syndrome has three copies of chromosome 21, rather than two). The frequency of Trisomy 21 has been determined to be a function of Advanced maternal age.

An example of monosomy is Turner syndrome, where the individual is born with only one sex chromosome, an X.

Exposure of males to certain lifestyle, environmental and/or occupational hazards may increase the risk of aneuploid spermatozoa.[3] In particular, risk of aneuploidy is increased by tobacco smoking,[4][5] and occupational exposure to benzene,[6] insecticides,[7][8] and perfluorinated compounds.[9] Increased aneuploidy is often associated with increased DNA damage in spermatozoa.

When the chromosome's structure is altered, this can take several forms:[10]

Chromosome instability syndromes are a group of disorders characterized by chromosomal instability and breakage. They often lead to an increased tendency to develop certain types of malignancies.

Most chromosome abnormalities occur as an accident in the egg cell or sperm, and therefore the anomaly is present in every cell of the body. Some anomalies, however, can happen after conception, resulting in Mosaicism (where some cells have the anomaly and some do not). Chromosome anomalies can be inherited from a parent or be "de novo". This is why chromosome studies are often performed on parents when a child is found to have an anomaly. If the parents do not possess the abnormality it was not initially inherited; however it may be transmitted to subsequent generations.

Most cancers, if not all, could cause chromosome abnormalities,[11] with either the formation of hybrid genes and fusion proteins, deregulation of genes and overexpresson of proteins, or loss of tumor suppressor genes (see the "Mitelman Database" [12] and the Atlas of Genetics and Cytogenetics in Oncology and Haematology,[13]).