Civilization III, like the other Civilization games, entails building an empire, from the ground up, beginning in 4,000 BC and continuing slightly beyond the modern day. The player must construct and improve cities, train military and non-military units, improve terrain, research technologies, build Wonders of the World, make war or peace with neighboring civilizations, and so on. The player must balance a good infrastructure, resources, diplomatic and trading skills, technological advancement, city and empire management, culture, and military power to succeed. 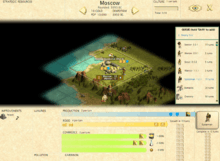 Configuring city resources in the game

The game map is made up of square tiles on a grid. Each city, terrain improvement, and unit is located in a specific tile, and each tile can host any number of units, land tiles can contain a transportation improvement (road or railroad) and a land improvement (farm or mine) or a city. Cities must be built a minimum of two tiles away from each other (no two cities can be touching). Each tile is made of a particular type of terrain that determines, among other things, how much food, production, and trade it produces when "worked". A tile can only be worked if it is one of the 20 tiles surrounding a city, a tile can only be worked by one city at a time, and each city can only work a number of tiles equal to or less than its population.

Food is used to grow the player's cities. Each population unit requires food to survive, and excess food is stored. Larger the population of the civilization, the larger the food storage. Production, represented in the game as "shields", is used to build units, buildings, and wonders. Commerce powers the player's economy. This commerce is split up as the player sees fit between technological research, tax revenue, and luxuries, each with a different purpose.

Terrain improvements are built by Worker units. Irrigation increases food, mines increase production, and roads increase commerce and reduce movement costs for all allied land units using them. Two civilizations must have Right of passage treaty signed to benefit from each other's roads.

Buildings enhance a city in some way and cost maintenance. Like units and Wonders, each one can only be built when the requisite technology has been acquired. Buildings require financial maintenance each turn, and can be destroyed. Only one of each type of building can be constructed in each city.

As in previous installments of Civilization, there are unique Wonders of the World that can only be built once per game. Wonders provide a variety of major benefits to a specific city, all cities on a continent or to an entire empire. Civilization III also added Small Wonders. Small Wonders have, for the most part, a sociological requirement to construct them, as well as a technological requirement. When a civilization captures a city with a Small Wonder, it is automatically destroyed. Some examples of small wonders are Wall Street, the Forbidden Palace and The Pentagon.

One of the major features of gameplay is scientific research. Completing the research of a new technology will make available new units, city improvements and wonders of the world, as well as special bonuses and abilities that are related to the technology. The technology tree is divided into four ages (Ancient Age, Middle Ages, Industrial Age, and Modern Age); each age requires the research of specific technologies to advance to that age. Additionally, there are technologies that provide useful bonuses that are often essential for good empire management, or may provide different alternatives to it. Technologies can also be traded to and from other civilizations in return for resources or other technologies. Technologies acquired in this way can in turn be exchanged (also called 'technology brokering') for other new technologies by contacting one or more other civilizations.

Citizens are the people who work in a city. There are four kinds: Laborers, Entertainers, Tax Collectors and Scientists. If there are more citizens in a city than available tiles to work, the extra citizens automatically become Entertainers. The second expansion, Conquests, adds two new types of citizens to the game: Policemen (reduce corruption) and Civil Engineers (enhance building and wonder production).

Culture is a feature that was not present in previous installments of the franchise. Each city has a cultural rating, which is the city's influence over local terrain. Essentially, the culture's outer edge, or "border", acts as the boundary of each civilization's empire. As the city's culture rating increases, so does its sphere of influence, bringing more territory under the player's control. Culture serves two other purposes. One is allowing the peaceful takeover, and military conquest.

Every civilization starts with certain special abilities, and they have a special unit that is unique to their civilization; these units usually have a historical basis (for example: the Japanese unique unit, which replaces the standard knight, is the samurai).

Citizens may be of different nationality

Combat is an important aspect of the game. Each unit begins as a "regular". Units can gain experience points through combat and be promoted. Each unit has an attack and defense value to determine the winner of each battle. Certain terrain types, as well as large cities, defending across a river, and fortifying a unit provide additional defensive bonuses. Ultimately, a random number generator determines the outcome of each battle. Another important aspect of combat is bombardment, which can be done by artillery, air and naval units. Bombardment can soften a target before it is attacked, and, if attacking a city, may kill some of the population or destroy certain city improvements.

When an elite unit wins a battle against an enemy unit, there is a small chance that it will produce a Great Leader. A Great Leader has the ability to create an Army. All units have levels of experience, which affect the game in terms of their durability in combat. When the unit lose all its health, it dies.

In Civilization III, there are three types of resources. Each type of resource can be found only on certain types of terrain and can provide a bonus to food, production, or commerce if found within the city radius and worked by a citizen. Bonus resources exist specifically for this purpose, while luxury and strategic resources provide other benefits, such as increasing citizens' happiness.

Corruption existed in Civilization III'. It includes waste which decreases a city's productivity. The levels of corruption and waste are dependent on the system of government of a civilization and the distance the city is away from the civilization's capital city. There are a number of ways to combat corruption which include building city improvements, such as the courthouse and the police station. 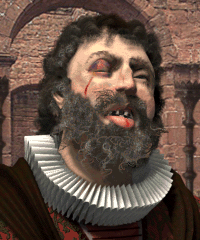 When a civilization is destroyed, a beaten up picture of their leader is shown, in this case Hannibal of Carthage from Play the World.

The initial release of the game had some bugs and glitches. Some of the features that Sid Meier's Alpha Centauri had but were not included in Civilization III (at least initially) included elevation, a working UN system, a social engineering system and a 'group movement' command to simplify managing units on the map.

The first patch came very soon after the game's initial release and other patches were released subsequently, improving gameplay significantly. The patches also added certain features, such as the group movement command noted above. There were complaints about the addition of features and bug fixes after initial release.

Upon release, the reaction to Civilization III was very positive. It won several "Game of the Year" awards such as the Interactive Achievement Awards 2002 Computer Strategy Game of the Year.

Two expansion sets have been published for Sid Meier's Civilization III: Play the World, and Conquests.[8]

Conquests offers nine more historical scenarios, ranging from Mesopotamia to WWII in the Pacific. Many of these scenarios have resources, improvements, wonders, music, and even government types that are specific to the scenario, especially the Mesoamerican and Sengoku Japan campaigns.[8]