Not to be confused with the Shemya Island radar station at Eareckson AFS, Alaska.

The site's land with the 1918 Alaska Railroad[6] was purchased by the Department of the Interior in 1949 for Alaskan Air Command's Clear Air Force Auxiliary Field for use as a Ladd Field gunnery range.[4] Total costs for the planned Thule and Clear BMEWS stations in a May 1958 estimate were ~$800 million--an October 13, 1958, plan for both estimated completion in September 1960.[7] An additional 10-by-40-mile (16 km × 64 km) area was appropriated for BMEWS Site II (cf. BMEWS Site I at Thule). 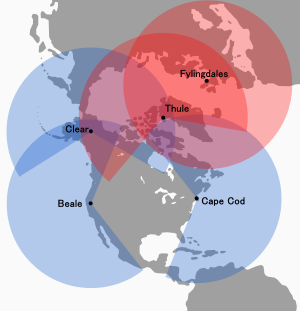 Clear Missile Early Warning Station construction began in August 1958 with 700 workers[2]--e.g., a "construction" camp was being erected in September 1958 by "Patti-McDonald and Morrison-Knudsen"[8] next to the railroad (for $1.7 million, 40,000 ft of railroad were moved by 1959.)[9] Groundbreaking for radar structures was May 1959 ("Baker and Ford built a transmitter and computer building; a heat dissipation system; a radar transmitter building; wells and pumphouses; a fire station; and utilities")[9] and the AN/FPS-50 pedestals were complete by June 2, 1959.[10] In 1959[11] after the original White Alice Communications System contract, "the next segment of WACS...was series of TD-2 microwave installations to support ... two routes [that] linked the Ballistic Missile Early Warning Site (BMEWS) at Clear AFB...one going down the southeast coast (the A route) to the Ketchikan-Seattle submarine cable*, and the other, going east to the Canada–US border (B Route) through Canada, down to the lower 48" which was Clear's Rearward Communications System to Murphy Dome (A Route) and the Gold King Creek AFS (B Route) with data for the Ent AFB CC&DF.[12]

Clear transferred to Air Defense Command in November 1961. By mid-1962, BMEWS "quick fixes" for ECCM had been installed at Thule and Clear[15] and by June 30, 1962, Ent AFB integration of BMEWS and SPADATS data was completed.[16] On July 31, 1962, NORAD recommended a tracking radar at Clear to close the BMEWS gap with Thule for low-angle missiles vice those with the 15-65 degree angle for which BMEWS was designed[15] (North Dakota's Cavalier AFS radar built in 1975 currently monitors for Hudson Bay launches.)

Detachment 2 of the 71st Missile Warning Wing was responsible for operations by civilian contractor personnel until 1964, when Air Force personnel began permanently manning the Tactical Operations Room (TOR). (Clear was unable to perform its mission for 6 minutes due to the record 1964 earthquake.)

In 1966,[17] the last of the 5 BMEWS tracking radars was installed[18] an RCA AN/FPS-92 Radar Set with an 84-foot (26 m) diameter antenna housed in a 42.7-meter (140 ft) diameter radome.[19] The FPS-92 was an improved tbd AN/FPS-49 Radar Set variant with radome blocks having two high-density 1 millimeter thick skins that cover a 15 centimeter thick Kraft-paper core (total of 1,646 hexagonal and pentagonal blocks[20] (the hexagonal blocks were "66-inch panels".)[21] FPS-92 completion raised the "final construction price" of "the missile warning system at Clear" to $300 million ($62 million by the Alaska District of the Corps of Engineers, e.g., for excavation and poured concrete as during building of the $2.8 million construction camp.)[9]

Clear provided emergency shelter for 216 flood refugees during August 1967, the same year many "temporary" buildings were replaced. Clear subsequently provided measurements for a University of Alaska experiment which injected sulfur hexafluoride into the upper atmosphere to see if the Aurora Borealis could be affected. Clear had Bomb Alarm System equipment installed by the time the BAS was accepted on 10 February 1961[22] (deactivated in 1970.)[7] In 1975, SECDEF told Congress that Clear would be closed when the Shemya Island and Beale AFB radars became operational.[23] After a Thule radome fire, Clear's FPS-92 radome was replaced in 1981 by first disassembling the tracker, constructing the new radome, and reconstructing the FPS-92.[24] Clear's 1st all-female crew pulled its 1st shift on February 28, 1986 (the 1st female, Lt. Anderson was assigned in 1973.)

Beginning in 1987, ITT operated and maintained the Clear BMEWS under a USAF Space Command contract[20] and in the 1990s, the Southwest Research Institute upgraded Clear's pulse modulator for the transmitter final-stage power amplifier.[25]

On August 30, 2006, after a transition that began in 2001, the ANG's 213th Space Warning Squadron took on the early warning/space surveillance mission. BAE Systems began a 2007 contract for SSPARS maintenance,[31] and the Clear FPS-120 was subsequently upgraded to an AN/FPS-132 Upgraded Early Warning Radar (UEWR)[32] by Boeing Integrated Defense Systems[33] "featuring processor and software improvements to enhance capability."[19]