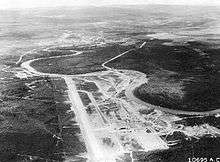 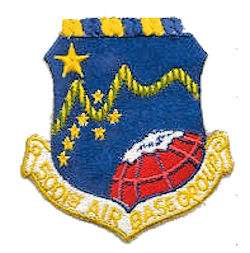 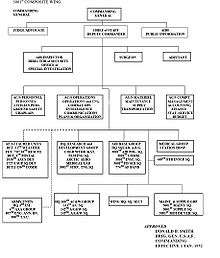 Ladd Army Airfield (IATA: FBK, ICAO: PAFB, FAA LID: FBK) is the military airfield located at Fort Jonathan Wainwright, located in Fairbanks, Alaska. It was originally called Fairbanks Air Base, but was renamed Ladd Field on 1 December 1939,[4] in honor of Major Arthur K. Ladd, a pilot in the U.S. Army Air Corps who died in a plane crash near Dale, South Carolina on 13 December 1935.[5][6]

The U.S. government began, for the first time, serious infrastructure expenditures in Alaska during the 1930s. Most prominent was an increase in the military presence. For most of the early 20th century, the only Army post in Alaska was Chilkoot Barracks/Fort Seward, located just outside Haines. With the threat of war looming as the 1930s ended, the need was established to develop multiple facilities as a means of defending Alaska against possible enemy attack.

The U.S. government acquired homesteads southeast of the town of Fairbanks beginning in 1938. From this land, totalling about 6 square miles (16 km2), was created Ladd Field. The first aircraft to land at Ladd was Douglas O-38F, 33-324, c/n 1177, in October 1940, which is now preserved in the National Museum of the United States Air Force.[7] Major construction of facilities began in 1941 and 1942, after the U.S. entered World War II. The initial construction occurred several miles from Fairbanks along a bend of the Chena River, consisting of an airfield, hangars, housing and support buildings. Many of these buildings still stand today.

Alaska's transportation infrastructure at the time was so limited and the problem of military supply so acute, it also made sense to concentrate the bases along existing supply lines near Anchorage and Fairbanks. Ladd's location near Fairbanks, the Richardson Highway and the Alaska Railroad, its access to fuel from the CANOL pipeline, and its position at the time as one of the United States' northernmost developed airbases were important factors in securing its early Cold War prominence.

The major use of Ladd Field was primarily cold-weather testing of aircraft and equipment. Only Interior Alaska offered the consistently cold temperatures needed. However, the Attack on Pearl Harbor in December 1941 forced the temporary halt on testing at Ladd since the military needed all aircraft for the defense of Alaska.

Testing at Ladd Field began again in 1942, but by 1943 aircraft cold-weather testing had become a second priority, as Ladd became the hub for fighters and bombers destined for the "Forgotten 1,000 Mile War" in the Aleutians against the Japanese or on their way to Soviet forces as part of the Lend-Lease program.

Reflecting the need to insure aircraft bound for the Soviet Union were prepared for the flight to Galena and Nome, prior to flying across the Bering Straits to Siberia, Ladd AAF the Alaska Air Depot of XI AF Service Command was activated on 8 July 1942. The depot moved to Elmendorf Field in 1943, although some of its subordinate units remained until 1944.

The airplanes arrived at Ladd were stripped of all but basic instrumentation and armament. Flights took off with no navigational aids from Ladd Field and fly the first leg to Galena, Alaska on the Yukon River. After refueling they went on to Nome, for the short hop across the Bering Strait to Siberia. Many were lost because of bad weather. The weather was also a danger to the ferrying of aircraft into Fairbanks.

Ice fog became a problem for airplanes landing at the field. The airplanes coming in from Great Falls AAB, Montana often could not make it to Ladd. Worse, many didn’t have enough fuel to make it back to Big Delta (to use the alternate Allen Field). It was this danger that led to the military decision to build an auxiliary field south of Ladd Field for a weather-alternate which eventually became "26 Mile Field", and later, Eielson Air Force Base.

By the end of the war, 7,926 aircraft were ferried though Ladd Field. The last aircraft transited the airfield on 1 September 1945.

When the Air Force was made a separate branch in 1947 the name was changed to Ladd Air Force Base. For many years, it would be one of two Air Force bases in the Fairbanks area.

Weather and Testing Units (including units at Ladd AFB)

From the late 1940s into the 1950s, Ladd AFB served as the northern hub for Air Force activities in Alaska. As headquarters first of the Northern Sector of the Alaskan Air Command and later of the 11th Air Division, Ladd was centrally involved in the Cold War missions of the Alaskan Command and in the transient missions of other military units, including the Strategic Air Command (SAC).

Ladd was not exclusively an Air Force site. The Army was also present to provide antiaircraft (AAA) support and base defense. At Ladd, Cold War activities fell mainly into three time periods: an early phase from 1946–1950; a buildup and support hub phase from 1950–1957; and a transfer phase from 1958–1961, when the installation was turned over to the Army.

During 1946-1950, personnel from Ladd laid some of the groundwork of the early Cold War with strategic reconnaissance and Arctic research projects. Among other missions, they made initial assessments of the Soviet presence in the Arctic; more fully developed the practice of polar navigation; extended Arctic topography; tested cold weather equipment, clothing, and human performance, as well as maintained the area air defenses of the region.

From the onset of the Korean War in 1950 and continuing through 1957, Ladd saw intense use. It became a busy operations and logistics center with significantly expanded facilities and personnel strength.

As the northern region headquarters of the 11th Air Division, the base was the logistical support center for Alaska's new defense projects. Ladd supported Aircraft Control & Warning (AC&W) sites and forward operating bases such as Galena, Alaska, the northwestern segments of the Distant Early Warning Line (DEW Line), and the White Alice communications network (WACS).

Research projects grew from early Arctic aeromedicine and cold weather testing to include ice station research on the polar pack ice and support for Air Force contracted research in geophysics, communications, and other disciplines. During the 1957/1958 International Geophysical Year (IGY)Ladd provided organizational and logistical support for Operation Ice Skate.

Air defense remained the primary combat mission, while tactical ground support, fighter escort, Arctic training exercises, and base defense were other parts of the base's integrated combat role. The 4th Infantry supplied the Army manpower through 1956.

By 1958, the space age was dawning. ICBMs changed the focus of air defense away from responding to manned bombers, and satellites were poised to revolutionize communications. That year, the Eisenhower administration drastically curtailed defense funding. One year later, in September 1959, USAF Headquarters informed the Alaskan Air Command that Ladd would be closed and its functions transferred to Eielson and Elmendorf AFBs.

For some time, the closure plans remained secret. In May 1960, USAF announced that the 449th Fighter-Interceptor Squadron would be inactivated as part of a "recent reevaluation of the Air Defense Master Plan". By September 1960, Air Force flying operations ceased at Ladd, while announcements confirmed that the Army would take over the installation.

By 1960, operations at Ladd had already diminished from the height of activity in the mid-1950s. The last fighter squadron, the 449th, was inactivated in August 1960. Remaining operations included the Arctic Survival Training School and the MATS Beaverette passenger flights to Elmendorf and McChord AFBs. These responsibilities transferred entirely to Eielson. Most other functions transferred to Elmendorf, including a unit of C-123 transport aircraft, Tactical Air Navigation (TACAN) operations, and all logistic support for auxiliary sites. A few operations continued on-site as Army tenants under Air Force control after the transfer, most notably the USAF hospital and the Arctic Aeromedical Laboratory.

The actual transfer operation was an administrative undertaking lasting more than six months. Each Air Force function was scrutinized and either transferred or closed out, with supplies and equipment turned in, inventories zeroed out, and personnel reassigned. Ladd, already the headquarters of the Army's Yukon Command, would see the arrival of 2,000 Army personnel previously stationed at Eielson as part of the transfer.

On January 1, 1961, the Army formally took over the installation and renamed it Fort Wainwright.

The elements of the airfield associated with its role in World War II, including two runways, hangars and other operational facilities, and officers' quarters, were designated a National Historic Landmark in 1985.[3][16]