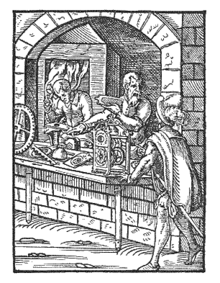 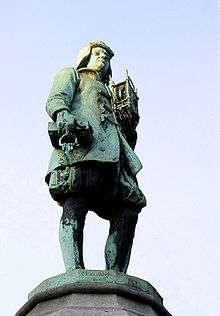 The statue of the clockmaker (Jean Cuypers – 19th century) – Brussels

A clockmaker is an artisan who makes and/or repairs clocks. Since almost all clocks are now factory-made, most modern clockmakers only repair clocks. Modern clockmakers may be employed by jewellers, antique shops, and places devoted strictly to repairing clocks and watches. Clockmakers must be able to read blueprints and instructions for numerous types of clocks and time pieces that vary from antique clocks to modern time pieces in order to fix and make clocks or watches. The trade requires fine motor coordination as clockmakers must frequently work on devices with small gears and fine machinery.

Originally, clockmakers were master craftsmen who designed and built clocks by hand. Since modern clockmakers are required to repair antique, handmade or one-of-a-kind clocks for which parts are not available, they must have some of the design and fabrication abilities of the original craftsmen. A qualified clockmaker can typically design and make a missing piece for a clock without access to the original component.

Clockmakers generally do not work on watches; the skills and tools required are different enough that watchmaking is a separate field, handled by another specialist, the watchmaker.

The earliest use of the term clokkemaker is said to date from 1390, about a century after the first mechanical clocks appeared.[1] From the beginning in the 15th century through the 17th century, clockmaking was considered the "leading edge", most technically advanced trade existing. Historically, the best clockmakers often also built scientific instruments, as for a long time they were the only craftsmen around trained in designing precision mechanical apparatus. In one example, the harmonica was invented by a young German clockmaker, which was then mass-produced by another clockmaker, Matthias Hohner. 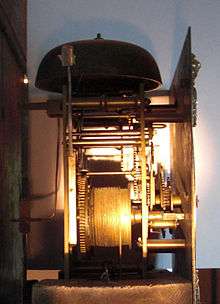 Prior to 1800 clocks were entirely handmade, including all their parts, in a single shop under a master clockmaker. Examples of these complex movements can be seen in the many longcase clocks constructed in the 16th and 17th centuries. By the 19th century, clock parts were beginning to be made in small factories, but the skilled work of designing, assembling, and adjusting the clock was still done by clockmaking shops. By the 20th century, interchangeable parts and standardized designs allowed the entire clock to be assembled in factories, and clockmakers specialized in repair of clocks.

As the art of making clocks became more widespread and distinguished, guilds specifically for this trade emerged around the sixteenth century. One of the first guilds developed in London, England, known as the Worshipful Company of Clockmakers; the group formed after a small number of foreign-trained clockmakers spent time working in London.[2] A requirement of joining the guild was to practise their craft and gain as much experience as possible, along with joining one of many other trade guilds, such as the Blacksmiths, Stationers, or Drapers Company. There are many guilds where clockmakers meet to buy, sell and get clocks to repair from customers, the IWJG is one of the most prominent in the world.

Early clockmakers fashioned all the intricate parts and wheelwork of clocks by hand, using hand tools. They developed specialized tools to help them.[3]

View inside the Relojes Centenario factory in Zacatlán, Puebla Mexico 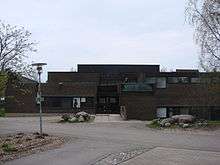 Clockmaker is also the name of several movies.[4]

Deists often call God the "Clockmaker". The Temple of the Great Clockmaker, in the novel The Case Of The Dead Certainty by Kel Richards, is a temple which represents deism.

The Clock Maker Theory and the watchmaker analogy describe by way of analogy religious, philosophical, and theological opinions about the existence of god(s) that have been expressed over the years.

During the 1800s and 1900s, clocks or watches were carried around as a form of flaunting social status. They were also a way of instilling a sense of time regulation for work in the budding industrial market.

In 2004, Jim Krueger wrote a comic book entitled The Clock Maker, published by German publisher Image Publishing, that focuses on the life of a clockmaker.

Artist Tony Troy creates the Illustration titled "The Clockmaker" in 2003 for his Broadway musical "The Fluteplayer's Song" http://www.tonytroyillustrations.com/catalog/i2.html