A file is a tool used to remove fine amounts of material from a workpiece. It is common in woodworking, metalworking, and other similar trade and hobby tasks. Most are hand tools, made of a case hardened steel bar of rectangular, square, triangular, or round cross-section, with one or more surfaces cut with sharp, generally parallel teeth. A narrow, pointed tang is common at one end, to which a handle may be fitted.[1]

A rasp is a form of file with distinct, individually cut teeth used for coarsely removing large amounts of material.[2]

Files have also been developed with abrasive surfaces, such as natural or synthetic diamond grains or silicon carbide, allowing removal of material that would dull or resist metal, such as ceramic.

Early filing or rasping (the distinction is emic, not etic) has prehistoric roots and grew naturally out of the blending of the twin inspirations of cutting with stone cutting tools (such as hand axes) and abrading using natural abrasives, such as well-suited types of stone (for example, sandstone).[3] Relatedly, lapping is also quite ancient, with wood and beach sand offering a natural pair of lap and lapping compound. The Disston authors state, "To abrade, or file, ancient man used sand, grit, coral, bone, fish skin, and gritty woods,—also stone of varying hardness in connection with sand and water."[4]

During the Middle Ages files were already quite advanced, thanks to the extensive talents of blacksmiths.[5] By the 11th century, there already existed hardened files that would seem quite modern even to today's eyes.[5] But although they existed, and could even have spread widely, in a geographical sense, via trade, they were not widespread in the cultural sense of the word—that is, most people, and even many smiths, did not have them. For example, in the 13th century, ornamental iron work at Paris was done skillfully with the aid of files, but the process was a secret known only to a master craftsman.[5] The Disston authors state, "It was not until the fourteenth century, however, that those who practiced art in ironwork began to use other tools, besides heat and the hammer, regularly."[5] This statement could mislead in the sense that stoning (with sandstone) and lapping (with wood, sand, and water) have never been rare activities among humans, or especially smiths. But the point is that modern iron or steel files, with teeth and hardening, and the material culture of intricate filing that would lead to locksmithing and gunsmithing, for example, are what took time to become common. But by the late Middle Ages, however, the transition was extensive. The Disston authors mention Nuremberg, Sheffield, and Remscheid (they use the Reimscheid spelling) as leading centers of production for files as well as tools in general. The activity in Remscheid reflects the metalworking spirit of the Rhine-Ruhr region in general (including Essen, Düsseldorf, and Cologne) rather than representing a single village of geniuses in isolation. (In fact, given the Disston authors' mention of the blacksmith guilds of 13th-century Florence and 15th-century England, coupled with their mention of Nuremberg, Sheffield, and Remscheid, it is interesting to trace a region that sweeps from Florence through Nuremberg, the Rhine-Ruhr, the Netherlands, and up to Sheffield, and to compare it with the modern economics notation of the Blue Banana.) Most files of the period were smithed by hand in a sequence in which the iron was forged (heated and hammered), then the teeth were cut with a chisel (some of this action was just as much upsetting/swaging as it was cutting), and then the piece was hardened (by heating and then quenching), followed sometimes by tempering. Among the drawings of Leonardo da Vinci is a sketch of a machine tool for the cutting of files (the chisel would make one strike, swaging a tooth, then automatically advance into position for the next tooth, and strike again).

Prior to the industrialization of machining and the development of interchangeable parts during the 19th century, filing was much more important in the construction of mechanisms. Component parts were roughly shaped by forging, casting, and by primitive machining operations. These components were then individually hand-fit for assembly by careful and deliberate filing. The potential precision of such fitting is much higher than generally assumed, but the components of such hand-fit assemblies are decidedly not interchangeable with those from another assembly. Locks, clocks, and firearms (flintlocks and earlier) were manufactured in this way for centuries before the Industrial Revolution.

Machining in the mid-19th century was heavily dependent on filing, because milling practice was slowly evolving out of its infancy. As late as the early 20th century, manufacturing often involved filing parts to precise shape and size. In today's manufacturing environment, milling and grinding have generally replaced this type of work, and filing (when it occurs at all) usually tends to be for deburring only. Skillful filing to shape and size is still a part of diemaking, moldmaking, toolmaking, etc., but even in those fields, the goal is usually to avoid handwork when possible. 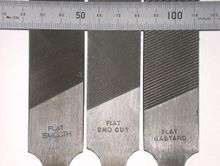 Files come in a wide variety of materials, sizes, shapes, cuts, and tooth configurations. The cross-section of a file can be flat, round, half-round, triangular, square, knife edge or of a more specialized shape. Steel files are made from high carbon steel[6][7] (1.0 to 1.25% carbon) and may be through hardened[8] or case hardened.[9][10]

There is no unitary international standard for file nomenclature; however, there are many generally accepted names for certain kinds of files. A file is "blunt" if its sides and width are both parallel throughout its length.[2] It is "tapered" if there is a reduction in its dimensions from its heel toward its point. A file may taper in width, in thickness, or both.[2] A "tang" is a protrusion at the heel, tapered, parallel sided, or conical, for gripping, inserting in a handle, or mounting in a chuck.[2]

The cut of the file refers to how fine its teeth are. They are defined as (from roughest to smoothest): rough, middle, bastard, second cut, smooth, and dead smooth. A single-cut file has one set of parallel teeth while a cross-cut or double-cut file has a second set of cuts forming diamond shaped cutting surfaces.[1] In Swiss-pattern files the teeth are cut at a shallower angle, and are graded by number, with a number 1 file being coarser than a number 2, etc. Most files have teeth on all faces, but some specialty flat files have teeth on only one face or one edge, so that the user can come right up to another edge without damaging the finish on it.

Some of the common shapes and their uses:

A selection of diamond impregnated files

Instead of having teeth cut into the file's working surface, diamond files have small particles of industrial diamond embedded in their surface (or into a softer material that is bonded to the underlying surface of the file). The use of diamonds in this manner allows the file to be used effectively against extremely hard materials, such as stone, glass or very hard metals such as hardened steel or carbide against which a standard steel file is ineffective. Diamond files are also the only type that may be used with a back-and-forth motion without damaging the file. These may also be called diamond laps, as the "teeth" are not regular projections, as in a file, but particles, usually shaped and located randomly and held in place by a softer (any other) material.

A selection of small needle files

The image to the left shows a selection of needle files in an assortment of cross sectional shapes.

Needle files are small files that are used in applications where the surface finish takes priority over metal removal rates but they are most suited for smaller work pieces. They are often sold in sets, including different shapes.

A selection of riffler files

Riffler files are small to medium-sized files in an assortment of cross sectional shapes and profiles. The varying profiles and shapes enable them to be used in hard to reach, or unusually shaped areas. They are often used as an intermediate step in die making where the surface finish of a cavity die may need to be improved, e.g. in plastic injection moulding or die casting.

A selection of machine files

Files are produced specifically for use in a filing machine, which is similar in appearance to a scroll saw with a vertically reciprocating file mounted in the middle of a table. A workpiece is manipulated around the file's face as the shape requires.

A cone point (as pictured in the top and bottom files at left) allows a file to center itself in its mount. Files with flat mounting surfaces must be secured with set screws.

Filing machines are rarely seen in modern production environments, but may be found in older toolrooms or diemaking shops as an aid in the manufacture of specialist tooling.

Escapement files, also known as watchmaker's files, are a classification of short, (very) thin files with bastard-cut or embedded diamond surfaces, similar to needle files in form and function but smaller. Typical dimensions are on the order of approximately 100–140 mm (4-5 1⁄2 in.) in length and 3–5 mm ( 1⁄8- 3⁄16 in.) in width. Best used for fine, delicate work on small pieces or mechanisms (such as escapements), escapement files are commonly used by clock and watchmakers, as well as in crafting jewelry.

During root canal therapy, round files ranging from .06-to-0.8-millimetre (0.0024 to 0.0315 in) diameter files are used to smooth the narrow canals of the interior of the tooth and thus facilitate disinfection of the internal surface. Typically the files are made of stainless steel or nickel titanium (NiTi) and come in a variety of styles. Mechanized files, known as rotary files, are also commonly used. These files attach to the head of a specific oscillating or rotating drill.[11]

Files have forward-facing cutting teeth, and cut most effectively when pushed over the workpiece. A variety of strokes are employed to stabilize the cutting action and derive a varied result.[2] Pulling a file directly backwards on a workpiece will cause the teeth to dull. Draw filing is an operation in which the file is grasped at each end, and with an even pressure alternately pulled and pushed perpendicularly over the work.[2] A variation involves laying the file sideways on the work, and carefully pushing or pulling it across the work. This catches the teeth of the file sideways instead of head on, and a very fine shaving action is produced. There are also varying strokes that produce a combination of the straight ahead stroke and the drawfiling stroke, and very fine work can be attained in this fashion. Using a combination of strokes, and progressively finer files, a skilled operator can attain a surface that is perfectly flat and near mirror finish.

Pinning refers to the clogging of the file teeth with pins, which are material shavings. These pins cause the file to lose its cutting ability and can scratch the workpiece. A file card, which is a brush with metal bristles, is used to clean the file. (The name, "card", is the same as used for the "raising cards" (spiked brushes) used in woolmaking.) Chalk can help prevent pinning.[12]