For the 2011 Georgian film, see The Watchmaker.
For the theological argument, see watchmaker analogy.

A modern watchmaker at his workstation; he wears a magnifying loupe to more easily see the small parts of a watch

A watchmaker's lathe in use to prepare a decorative watch component cut from copper.

A watchmaker is an artisan who makes and repairs watches. Since a majority of watches are now factory made, most modern watchmakers only repair watches. However, originally they were master craftsmen who built watches, including all their parts, by hand. Modern watchmakers, when required to repair older watches, for which replacement parts may not be available, must have fabrication skills, and can typically manufacture replacements for many of the parts found in a watch. The term clockmaker refers to an equivalent occupation specializing in clocks.

Most practising professional watchmakers service current or recent production watches. They seldom fabricate replacement parts. Instead they obtain and fit factory spare parts applicable to the watch brand being serviced. The majority of modern watchmakers, particularly in Switzerland and Europe, work directly for the Watchmaking Industry, and may have completed a formal watchmaking degree at a technical school. They also receive in-house 'brand' training at the factory or service center where they are employed. However, some factory service centers have an approach that allows them to use 'non-watchmakers' (called "opérateurs") who perform only one aspect of the repair process. These highly skilled workers do not have a watchmaking degree or certificate, but are specifically trained 'in-house' as technicians to service a small number of components of the watch in a true 'assembly-line' fashion, (e.g., one type of worker will dismantle the watch movement from the case, another will polish the case and bracelet, another will install the dial and hands, etc.). If genuine watchmakers are employed in such environments, they are usually employed to service the watch movement.

Due to factory/genuine spare parts restrictions, an increasing minority of watchmakers in the USA are 'independent,' meaning that they choose not to work directly for industry or at a factory service center. One major Swiss watch brand (Rolex) now pre-qualifies independent watchmakers before they provide them with spare parts. This qualification may include, but is not limited to, holding a modern training certificate from one of several reputable schools; having a workshop environment that meets Rolex's standards for cleanliness; using modern equipment; and being a member of the American Watchmakers-Clockmakers Institute. The Omega brand has the same approach. However, the vast majority of modern, Swiss brands do not sell parts to independent watchmakers, irrespective of the watchmaker's expertise, training or credentials. This industry policy is thought to allow the Swiss manufacturers to maintain tighter quality control of the after-sales service for its watch brands, produce high margins on after sales services (2-4 times what an independent watchmaker would ask), and to lower second-hand watchmaking parts on the used and fake market. 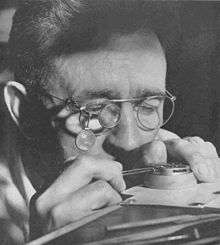 A watchmaker working on a Railroad watch

Historically, in England, watchmakers would have to undergo a seven-year apprenticeship and then join a guild, such as the Worshipful Company of Clockmakers in London, before selling their first watch. In modern times watchmakers undergo training courses such as the ones offered by the BHI, or one of the many other schools around the world following the WOSTEP style curriculum. Some USA watchmaking schools of horology will teach not only the wostep style including the ETA range of movements but also focus on the older watches that a modern watchmaker will encounter on a daily basis. In Denmark the apprenticeship lasts 4 years, with 6 terms at the Danish School of Watchmaking in Ringsted. The education covers both clocks and watches, as a watchmaker in Denmark also is a clockmaker. In France, one can find 3 diplomas: the lowest is the fr:Certificat d'aptitude professionnelle (CAP) en fr:Horlogerie (in 2 years), then the fr:Brevet des Métiers d'Art/BMA Horlogerie for another 2-years course. And optionally, the fr:Diplôme des métiers d'art/ DMA Horlogerie (2 years).

William Paley and others used the watchmaker in his famous analogy to infer the existence of God (the teleological argument) .

Richard Dawkins later applied this analogy in his book The Blind Watchmaker, arguing that evolution is blind in that it cannot look forward.

Alan Moore in his graphic novel Watchmen, uses the metaphor of the watchmaker as a central part of the backstory of his heroic character Dr. Manhattan.

In the NBC television series Heroes, the villain Sylar is a watchmaker by trade. His ability to know how watches work corresponds to his ability to gain new superpowers by examining the brains of people he has murdered.

In the scifi novel The Mote in God's Eye by Larry Niven, the Watchmakers are a small technologically intelligent sub-species of the Moties that will repair/improve things left for them (accompanied by food as payment).