Colchester is a town in Chittenden County, Vermont, United States. The population was 17,067 as of the 2010 census.[3] It is the fourth-most populous municipality and second-most populous town in the state of Vermont by population.[4] Colchester is a suburb of the city of Burlington, Vermont's most populous municipality. The town is directly to Burlington's north on the eastern shore of Lake Champlain to the west of the Green Mountains. The Vermont National Guard is based in the town, and it is also home to the campus of Saint Michael's College.

Colchester is located on the shore of Malletts Bay, part of Lake Champlain. The westernmost part of the town touches the New York state border in the middle of the lake. To the northwest across the eastern arm of the lake lies the town of South Hero in Grand Isle County, Vermont. Chittenden County communities bordering Colchester are Milton to the northeast, Westford touching the easternmost point of Colchester, Essex to the southeast, and the cities of South Burlington, Winooski, and Burlington to the south.

About 2,000 years ago, during the Early Woodland period, pre-Columbian natives lived in the area.[5] Chartered June 7, 1763,[6] the town was named for the Earl of Colchester.[7]

In 1922, the area of Winooski broke away from the town and formed its own city.

There were 6,144 households out of which 34.1% had children under the age of 18 living with them, 55.2% were married couples living together, 8.8% had a female householder with no husband present, and 31.9% were non-families. 22.2% of all households were made up of individuals and 5.0% had someone living alone who was 65 years of age or older. The average household size was 2.50 and the average family size was 2.96. 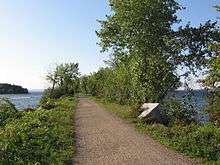 The Island Line Trail travels from Colchester across Lake Champlain to Grand Isle County; it is a former railroad line.

One measure of economic activity is retail sales. Colchester was fourth in the state in 2007 with $245.8 million.[10] Major employers in the town include the VNA of Chittenden & Grand Isle Counties, Saint Michael's College, Costco Wholesale Corporation, Green Mountain Power, Shaw's Supermarket, and Champlain Cable Corporation. [11]

The lakeshore areas of Colchester get an influx of vacationers every summer from southern New England and the New York City area. Traffic, especially around the Fourth of July holiday, increases by a substantial margin.

Interstate 89 passes through the area, with exits 16 and 17 serving Colchester. Exit 16 connects to the concurrency of US Routes 2 and 7 (Roosevelt Highway), just north of Winooski. Exit 17 connects to US 2, which goes west to the Champlain Islands, and also to US 7, which heads north toward the town of Milton.[16] 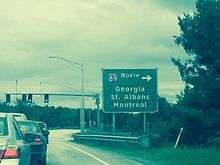 In the southeastern part of Colchester, and also along the US Route 7 corridor, bus service is provided by Chittenden County Transportation Authority.[17]

The Colchester School District underwent a teacher strike during October, 2005. The strike began over pay increases but quickly escalated to include many other aspects of the system. The strike ended on October 23, 2005, with an agreement on pay between teachers and board, and school re-opened on Monday the 24th. Negotiations took place for around five hours on October 18, 2005, but resulted in no settlement, and again on the 23rd, resulting in the conclusion to the strike.