Computer Modern is the original family of typefaces used by the typesetting program TeX. It was created by Donald Knuth with his Metafont program, and was most recently updated in 1992.[1] Computer Modern, or variants of it, remains very widely used in scientific publishing, especially in disciplines that make frequent use of mathematical notation.

As implied by the name, Computer Modern is a "modern" serif font, a genre that emerged in the late 18th century as a contrast to the more irregular designs that preceded them. Modern, or "Didone", fonts have high contrast between thick and thin elements, and their axis of "stress" or thickening is perfectly vertical. Computer Modern, specifically, is based on Monotype Modern 8a, and like its immediate model it has a large x-height relative to the length of ascenders and descenders. Monotype Modern was used extensively for printing mathematics before the arrival of Times New Roman, which publishers began to use after the 1950s.[2][3][4] Its selection as a default font for TeX exemplifies Knuth's desire to return to the glories of classic metal-type printing.[5]

The most unusual characteristic of Computer Modern, however, is the fact that it is a complete type family designed with the Metafont system. The Computer Modern source files are governed by 62 distinct parameters, controlling the widths and heights of various elements, the presence of serifs or old-style numerals, whether dots such as the dot on the "i" are square or rounded, and the degree of "superness" in the bowls of lowercase letters such as "g" and "o". This allows Metafont designs to be processed in unusual ways; Knuth has shown effects such as morphing in demonstrations, where one font slowly transitions into another over the course of a text.[6] Computer Modern is by no means the only Metafont-designed typeface, but it is by far the most mature and widely used. 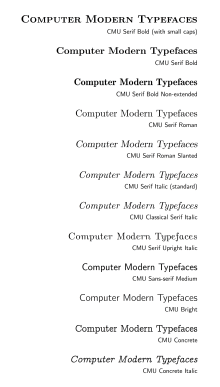 A sample gallery of many of the fonts from the CMU (Computer Modern) font family.

The advance of publishing technology (PostScript, PDF, laser printers) has reduced the need for bitmap fonts. The preferred formats are now outline fonts such as Type 1, TrueType, or OpenType, which can be rendered efficiently at arbitrary resolution and using sophisticated anti-aliasing techniques by printer firmware or on-screen document viewers. Therefore, several other projects have ported the Computer Modern fonts into such formats. Some of these projects have also complemented Computer Modern with

A current extended release of the Computer Modern family in the general-purpose OpenType format as the CMU distribution (link below) includes:

Computer Modern was first transformed to a PostScript Type 3 font format by BlueSky, Inc. in 1988, and then to Type 1 in 1992 to include font hinting.[7] The Type 1 version has since then been donated to the American Mathematical Society (AMS) which distributes them freely under the Open Font License.[8] It is found in most standard TeX distributions.

The Latin Modern implementation, maintained by Bogusław Jackowski and Janusz M. Nowacki, is now standard in the TeX community and was made through a Metafont/MetaPost derivative called METATYPE1. It was derived from the BlueSky Type 1 fonts, which were converted back into outline-based METATYPE1 programs, from which then the extended Type1 and OpenType Latin Modern fonts were developed. ConTeXt uses Latin Modern as default font, instead of Computer Modern[9]

The Type1 to METATYPE1 to Type 1 roundtrip conversion process involved in the production of the Latin Modern fonts did try to preserve the hinting information of the BlueSky fonts, however it added rounding errors that do affect the quality of the hinting at low pixel sizes. As a result, on-screen display of the Latin Modern fonts can result in a less even display of kerning and character heights than is the case with the BlueSky fonts.[10]

The same process was later extended to some free PostScript font clones under the umbrella project called TeX Gyre.[11]