In Islamic sharia legal terminology, a mahram (Arabic محرم, also transliterated mahrim or maharem) is an unmarriageable kin with whom sexual intercourse would be considered incestuous, a punishable taboo. Current usage of the term covers a wider range of people and mostly deals with hijab and its cultural and regional norms.

The plural form of the word in the Arabic language is maharim with long second vowel (Arabic محارم, also transliterated maharem). Sometimes the word is capitalized but there is not a general consensus that the word should be capitalized like Muslim. (The Arabic alphabet has no upper-case vs. lower-case distinction.)

Being mahram is a mutual condition. If A is mahram to B, B is definitely mahram to A. 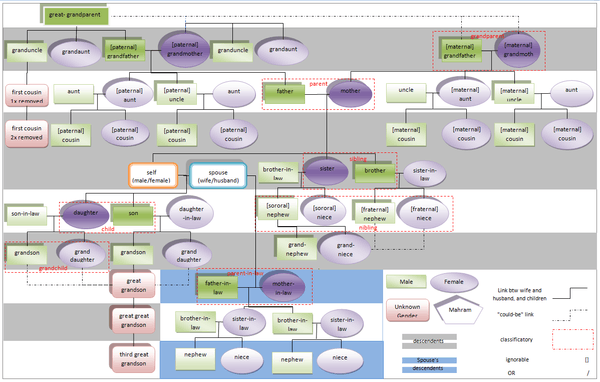 In this kinship chart, mahrams are shadowed. Note that not all mahrams are shown in the chart (specially at step-relatives and rada kinship).

Any relative that a Muslim is not allowed to marry is mahram, if they are of the opposite sex and have reached puberty. A partial list of what is considered a mahram can be found in Surah 24, Ayah 31, of the Koran.

A woman's male mahrams fall into four categories (three categories in the strict-sense definition that does not count one's spouse). Mahrams for a man can be derived in a similar manner.

For a man, mahram women include his mother, grandmother, daughter, granddaughter, sister, aunt, grandaunt, niece, grandniece, his father's wife, his wife's daughter (step-daughter), his mother-in-law, his rada mother and any other rada relatives that correspond to the above-mentioned blood relatives. As the Prophet said, "What is forbidden by reason of kinship is forbidden by reason of suckling." (Al-Bukhari)

These are considered maharim because they are mentioned in the Koran:

All of the man's female relatives mentioned in these two verses are considered his maharim, because it is unlawful (haram) for him to marry them, except the wife's sister mentioned last, who is not a mahram because he can marry her if he divorces her sister, or if his wife dies. As noted in the introduction, the notion of mahram is reciprocal. All other relatives are considered non-maharim and they fall under the category of strangers.

Some rules regarding mahrams and ghayr mahrams (non-mahrams)