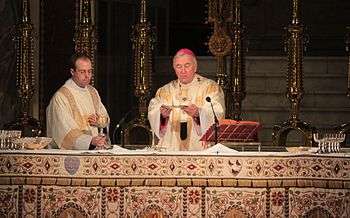 The offering of Mass in Catholic Westminster Cathedral in London, celebrated with the use of the Roman Missal, published following the promulgation of Sacrosanctum concilium.

Sacrosanctum Concilium, the Constitution on the Sacred Liturgy, is one of the constitutions of the Second Vatican Council. It was approved by the assembled bishops by a vote of 2,147 to 4 and promulgated by Pope Paul VI on December 4, 1963. The main aim was to achieve greater lay participation in the Catholic Church's liturgy. The title is taken from the opening lines of the document and means "this Sacred Council".

The numbers given correspond to section numbers within the text.

As is customary with Catholic documents, the name of this Constitution, "Sacred Council" in Latin, is taken from the first line (incipit) of the document:

1. This sacred Council has several aims in view: it desires to impart an ever increasing vigor to the Christian life of the faithful; to adapt more suitably to the needs of our own times those institutions which are subject to change; to foster whatever can promote union among all who believe in Christ; to strengthen whatever can help to call the whole of mankind into the household of the Church. The Council therefore sees particularly cogent reasons for undertaking the reform and promotion of the liturgy.
— Sacrosanctum Concilium

Participation of the laity

One of the first issues considered by the council, and the matter that had the most immediate effect on the lives of individual Catholics, was the renewal of the liturgy. The central idea was that there ought to be greater lay participation in the liturgy.

Mother Church earnestly desires that all the faithful should be led to that fully conscious and active participation in liturgical celebrations which is demanded by the very nature of the liturgy. Such participation by the Christian people as a chosen race, a royal priesthood, a holy nation, a redeemed people (1 Peter 2:9; cf. 2:4–5), is their right and duty by reason of their baptism.
— Sacrosanctum Concilium 14

Popes Pius X, Pius XI, and Pius XII consistently asked that the people be taught how to chant the responses at Mass and that they learn the prayers of the Mass in order to participate intelligently. Now the bishops decreed that: “To promote active participation, the people should be encouraged to take part by means of acclamations, responses, psalmody, antiphons, and songs.” (30) Composers should “produce compositions which …(provide) for the active participation of the entire assembly of the faithful. (121)

After centuries when, with the Mass in Latin, Catholic piety centered around popular devotions, the bishops decreed that “Popular devotions … should be so drawn up that they harmonize with the liturgical seasons, accord with the sacred liturgy, are in some fashion derived from it, and lead the people to it, since, in fact, the liturgy by its very nature far surpasses any of them.” (13)

The council fathers established guidelines to govern the renewal of the liturgy, which included, allowed, and encouraged greater use of the vernacular (native language) in addition to Latin, particularly for the biblical readings and other prayers. Implementation of the Council's directives on the liturgy was to be carried out under the authority of Pope Paul VI by a special papal commission, later incorporated in the Congregation for Divine Worship and the Discipline of the Sacraments, and, in the areas entrusted to them, by national conferences of bishops, which, if they had a shared language, were expected to collaborate in producing a common translation.