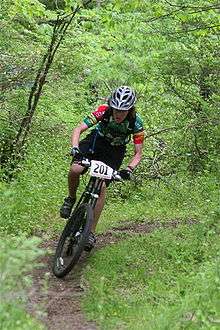 A rider during a Cross-country race

Mountain bike racing (shortened MTB or ATB racing) is a competitive cycle sport held on off-road terrain. The Union Cycliste Internationale (UCI) recognised the discipline relatively late in 1990, when it sanctioned the world championships in Durango, Colorado. The first UCI Mountain Bike World Cup series took place in 1991. Its nine-race circuit covered two continents—Europe and North America—and was sponsored by Grundig. Cross-country racing was the only World Cup sport at this time. In 1993, a six-event downhill World Cup was introduced. In 1996, cross-country mountain biking events were added to the Olympic Games. In 2006, cross-country mountain biking events became part of the World Deaf Cycling Championships for the first time in San Francisco, USA.[1]

Mountain bike racing is as old as the first appearance of the mountain bike itself, when the originators, calling themselves klunkers, descended with their heavily modified beach cruiser bikes as predecessors of modern mountain bikes from numerous mountains in California against a rudimentary time measurement. The famous Repack racing down-hill against the time near Fairfax, Marin County, CA took place in 1976.

The oldest organised cross-country (XC) racing-like event, however, is believed to take place from Crested Butte to Aspen in Colorado in 1978. It took long 10 years before the UCI recognised racing on mountain bikes as a regular cycling discipline in 1990. In the meantime, the phenomenon of mountain bike racing spread across the U.S.A. under the umbrella of NORBA.

Mountain bike racing became an Olympic discipline in 1996 and a cross-country type mountain biking race has been held ever since its debut at the summer Olympic games in Atlanta. Given the enormous variation of terrain a mountain bike can navigate, a division took place as a cause of riders' specialisation.

Technical assistance area for cross-country events at the 2009 world championships. 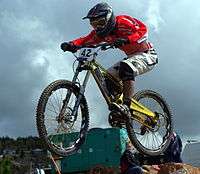 A competitor in a downhill race. 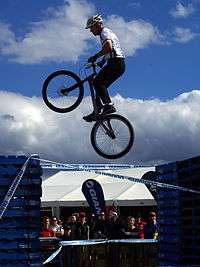 The main events in mountain bike racing are the cross-country event at the Summer Olympics and the World Championships and World Cup organized every year by the UCI at various venues around the World.

There are also other notable events in some countries, like Crankworx, a week-long event in Whistler, British Columbia, Canada; MTB Himachal in India; Chupacabras, a race in Juárez, Mexico; Cape Epic in South Africa; Sea Otter Classic in the United States; Mountain Mayhem in the United Kingdom and La Ruta de los Conquistadores in Costa Rica, this last one regarded as one of the toughest mountain bike competitions worldwide.