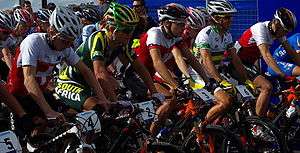 Moments before the start of the under-23 men's cross-country race at the 2009 World Championships in Canberra, Australia. Eventual winner Burry Stander is second from left.
See also: UCI Mountain Bike World Cup

The UCI Mountain Bike & Trials World Championships are the world championship events for mountain bike racing in the disciplines of cross country, downhill, four-cross, cross-country eliminator, and trials. They are organized by the Union Cycliste Internationale (UCI), the governing body of world cycling.

The cross-country team relay was added in 1999. The dual slalom was added in 2000 but replaced by four-cross in 2002. Mountain bike marathon was included on the schedule at the 2003 championships in Lugano, but run as a separate world championship from 2004 onwards. In 2014 and 2015 the four-cross events were held separately from the other disciplines as the UCI Four-cross World Championships, but were again included alongside the other disciplines in 2016.