The Danish Emergency Management Agency (DEMA) (Danish: Beredskabsstyrelsen) is a Danish governmental agency under the Ministry of Defence.[1] Its principal task is to manage an operational part who work out of six Emergency Management Centres, and administrative and legalizing part, who supervises the national and municipal rescue preparedness and advices the authorities on matters of preparedness. DEMA works in closely structured co-operation with the EU, UN and several neighbouring countries.

DEMA is capable of deploying abroad on request from another state or an international organisation. The decision to render assistance is taken in co-counsel with the Danish Foreign Ministry. DEMA can give support in instances of natural disasters and accidents, technological events and crises and civil wars. It is able to react quickly in acute situations and leave its home base within hours on smaller missions, and have the ability to deploy a mobile hospital in only 24 hours.[2]

By the Danish Preparedness Act (Beredskabsloven),[3] which came into force on 1 January 1992, the former WW2 era wartime civil defense corps was changed into a peace time "Emergency Management Agency", that could primarily work in peacetime. The Danish Emergency Management Agency was created out of the two agencies responsible for these former services, namely "Civilforsvarsstyrelsen" (Civil Defense Agency) and "Statens Brandinspektion" (Governmental Fire Inspection Agency).

By means of a number of political agreements supported widely by the parties in the Danish Parliament, the rescue preparedness has been continuously developed and adapted to the changing demands made by the society and the changes in the security-policy situation.

DEMA and the public

When the Civil Air Defense was created the vehicles were old gray trucks, and this truck-color was kept for many years. The uniform of the Civil Air Defense, and later the Civil Defense was also kept gray, with orange shoulders and blue triangles - The international icon for civil protection. Later the vehicles was painted orange to show that it is a true Civil Defense agency and still are this color - Denmark being one of the only nations left still using the Civil Defense colors and logo to this extend. The uniforms where modernized in the year 2000, and the old gray uniform was replaced by a new dark blue uniform, called M/2000. The uniform has been edited some times, and a new rescue-uniform was created in 2009 for USAR teams. The M/2000 is being replaced by a new uniform currently under development.

When on international deplyment the DEMA often uses discrete civilian clothing, mostly in a sand/brown color. Experiences have shown that the dark blue uniform may often be mistaken as military or police in other countries, and this has given some unfortunate situations. The only current deployment where the uniform is used is the UNIFIL deployment in Lebanon, where a special uniform has been developed for the hot climate.

Although DEMA hasn't been called Civil Defense (Civilforsvaret) for more than 15 years, the general public still often refers to it as the Civil Defense, and a lot don't know what DEMA is.

The municipalities doesn't have to do the firefighting themselves, and a large part of the fire department services are done by the private firm Falck A/S. 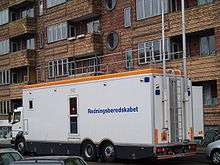 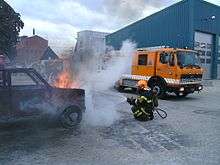 DEMA Volunteer extinguishing a car fire during a training exercise

The agency has a staff of some 600 people. About 170 of these are employed in the central Emergency Management Agency in Birkerød. The rest are employed at the agency’s six centers and two schools. It is possible to do conscription-service for the Danish military in the operational section of DEMA and the agency has around 450 conscripts every 9 months. Unlike the military where the normal service length is 4 months and there are no operational tasks, conscription service in DEMA is 9 months in length. Also the conscripts are made part of the national emergency response after 1 month of service and are often participation in firefighting and rescue operations. The conscripts get a full firefighters education and are trained in the following fields:

The primary function of the above centers are to assist municipal fire departments at major fires, assist to police, and to take care of the Danish nuclear fallout preparedness, HazMat preparedness, USAR/rescue preparedness and all other relevant tasks. Beredskabsstyrelsen Hedehusene is a 100% volunteer center the only exception being the chief officer and some teachers offering courses to private rescue firms. All the other centers are manned by conscripts who are controlled by a single officer and a couple of sergeants.

Besides from the regional support centers there were also (from 2000 to 2012) some minor support points that had equipment paid for by DEMA, but were manned by municipal volunteer firefighters. These support points were, like the regional support points, support centers for the municipal fire departments in case of major fires and other emergencies. With the new political defense agreement of 2012, the Municipal Support Centers where officially closed. Most of the municipal fire departments were offered to buy the equipment at very low costs.

The Municipal Support Centers were located at:

DEMA has participated in several international operations since the beginning of the 90's. Some notable missions are:

The Nuclear Division's responsibilities include:

The chemical division's responsibilities include:

The Danish Preparedness Act stipulates that each ministry, agency, or other authority in the Danish government is required to carry out relevant planning within their respective sector to deal with a serious adverse impact on critical functions of society. CPD helps facilitate planning within the different sectors and the coordination between the different sectors. This includes responsibility for national emergency planning, publication of guidance materials, courses, and other activities to strengthen the cooperation between the different actors in the Danish civil preparedness establishment.

Most recently the education for both firefighters and firechiefs has been completely revised in 2009 and 2010.