Not to be confused with Nykøbing Mors or Nykøbing Sjælland. 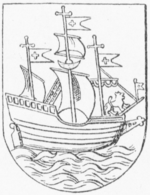 Nykøbing Falster (originally named Nykøbing) is a southern Danish city, seat of the Guldborgsund kommune. It belongs to Region Sjælland. The city lies on Falster, connected by the 295-meter-long Frederick IX Bridge over the Guldborgsund (Guldborg Strait) waterway to the island of Lolland. The town has a population of 16,503 (1 January 2015).[1] Including the satellite town Sundby on the Lolland side, with a population of 2,797, the total population is 19,300.

Nykøbing Falster is the largest city on the islands of Lolland and Falster, and is often called "Nykøbing F." to distinguish it from at least two other cities in Denmark with the name of Nykøbing. Nykøbing Falster is the seat of state and regional authorities. In addition to those two namesakes, a city in Sweden is called Nyköping, which means exactly the same in the closely related language.

There is a 0.5 kilometer long commercial district, walking street (gågade) on the Falster side of the city with a wide selection of shops. At the end of the street is a large plaza where special events are arranged. These include popular late-night events, which are held several times a year. It has a large central library in the center of town.

The town receives many visitors during the summer, especially from Sydfalster. 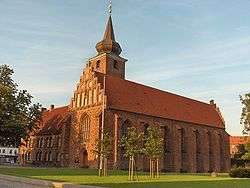 Nykøbing Falster was founded around a 12th-century medieval castle. At the end of the 12th century, fortifications were set up on a peninsula on Guldborgsund for protection against the Wends, and these were later converted into Nykøbing Castle. The town of Nykøbing Falster grew up around these fortifications. After the Reformation, the castle was the residence of widowed Danish queens. As several queens of German descent resided here, many Germans came to the town.[2]

Situated on a headland, the castle was protected from all sides. In its early days, the castle belonged to the royal house. Medieval documents issued in this region reveal that the royal court regularly visited the castle. This is the castle where Christopher II died (1332) and where Christian V was married (1667). Christian, Prince Elect of Denmark resided here. The castle was chartered in 1539. REF

The castle and the entire crown land on Falster were put up for sale in 1763 to help improve the poor state of government finances. The castle was sold for demolition, and only the modest ruin of one of the towers, Fars Hat (Father’s Hat in Danish) is in existence today.

From 1970 to 2006, Nykøbing was the administrative seat of the former county of Storstrøm. 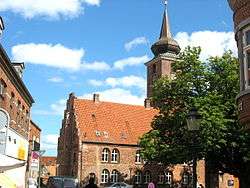 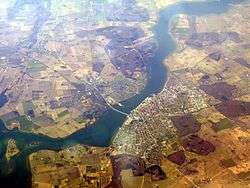 The city has a few noteworthy buildings, including a wooden house from 1580 and The Czar's House (Czarens Hus), which was built in the 1690s and is probably the most famous monument in Nykøbing Falster. The latter building was named Czarens Hus in memory of Peter the Great, who stayed there in 1716.

City inhabitants often walk in a people's park with its adjacent Guldborgsund Zoo.[3]

Nykøbing Falster has a railway station operated by Danish State Railways. It is the terminus for regular local passenger-train services from Copenhagen via Ringsted. International trains operating between Copenhagen and Hamburg (via the train ferry between Rødby and Puttgarden) also call at the station. The Lollandsbanen also operates a rail service to Nakskov.

Nykøbing Falster is twinned with: