Hadersleben ) is a Danish town of Region of Southern Denmark with a population of 21,574 (1 January 2014).[2] It is the main town and the administrative seat of Haderslev Municipality and is situated in the eastern part of Southern Jutland. Haderslev is home of Sønderjyske, which is an association football team that plays in the Danish Superliga for the 2015-16 season.

Haderslev in the 16th century

Haderslev is situated in a valley, leading from Vojens to Haderslev Fjord and the Baltic Sea. Haderslev was presumably founded by Vikings at least a century before it was granted status as royal borough in 1292. At that time, it had become one of the main trading centres in Southern Jutland. In 1327, Haderslevhus, the royal castle, was mentioned for the first time. It was situated east of the cathedral; an area still called Slotsgrunden. In the following centuries the city prospered, building both the Gothic Cathedral and the second castle of Hansborg (burnt in 1644), which was similar to Kronborg. Due to the plague in Copenhagen, King Christian IV was married there. In the 16th century, the city became one of the first Scandinavian places to embrace the Lutheran Reformation. Prior to the Second Schleswig War of 1864, Haderslev was situated in the Duchy of Schleswig, a Danish fief, so its history is properly included in the contentious history of Schleswig-Holstein. From 1864 it was part of Prussia, and as such part of the North German Confederation, and from 1871 onwards, part of the German Empire. In the 1920 Schleswig Plebiscite that returned Northern Schleswig to Denmark, 38.6% of Haderslev's inhabitants voted for remaining part of Germany and 61.4% voted for the cession to Denmark.[3] It was formerly the capital of the German Kreis Hadersleben and the Danish Haderslev County.

The trademark of Haderslev is unquestionably Haderslev Cathedral, which has existed since the middle of the 13th century, and since 1922 it was the seat of Haderslev Diocese. The town was an important breeding ground for the reformation in Denmark, and as early as 1526 Christian introduced, as the duke of Schleswig-Holstein, the reformation in Haderslev, just eight years before he became King of Denmark.

Another noticeable church is the white-chalked Sankt Severin Church, which lies at the banks of the town's inner pond.

Because of a renovation of the town's oldest houses, it means Haderslev offers a unique collection of houses and buildings from 1400 to the beginning of 20th century, and the town center's cobbled streets and alleys is very suitable for town strolling.

Once the town used to have a castle named "Haderslev Hus", but due to several town fires through the town's history the castle is no longer existent.

In the public park "Kløften", near the town's center, Kløften Festival, a three-day annual festival is in the summer. The festival uses one of Haderslev's important trademarks, the red-bricked water tower near the park as their logo. 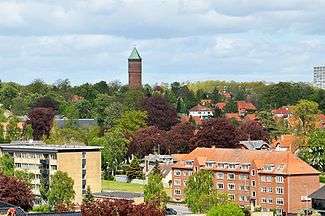 Kløften Festival's trademark, the red water tower, is visible from many places in the townfoto:Mogens Nielsen

A kommune by the previous name existed 1970–2006. It belonged to South Jutland County and covered an area of 272 square kilometres (105 sq mi) with a total population of 56,116 (2011). Its last mayor was Hans Peter Geil, a member of the liberal (Venstre) political party.

Neighboring municipalities were Christiansfeld to the north, Vojens to the west, Rødekro to the south, and Assens (on the island of Funen) to the East.

Haderslev is twinned with: