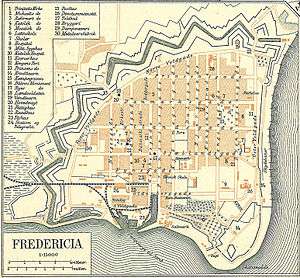 Fredericia (Danish pronunciation: [fʀɛðəˈʀeɕa]) is a town located in Fredericia municipality in the eastern part of the Jutland peninsula in Denmark, in a sub-region known locally as Trekanten, or The Triangle. It was founded in 1650 by Frederick III, after whom it was named.

After the devastation caused by the Thirty Years War in a largely unfortified Jutland, King Christian IV realized the necessity of building a strong fortress in Jutland, and decided that this project could be combined with his plans for building a large town in Jutland.

A fortified encampment was built on a point of land called Lyngs Odde, near the current location of Fredericia, with a rampart stretching to either side of the point, thus protecting the encampment from attacks. However, the fortifications were not perfect, and when Swedish Field Marshal Lennart Torstenson invaded Jutland, he was able to break through the ramparts. It was Frederick III who was finally able to complete the plans for the fortification, also adding a flank fortification on nearby Bers Odde as suggested by Danish Imperial Marshal Anders Bille.

On 15 December 1650, the King signed the document giving the town its first privileges, and work on the new fortifications could begin. In 1651, the town was named Frederiksodde (Frederick's Point) after the king, and on 22 April 1664, it was given the new Latinized name of Fredericia.

Every 6 July, the town of Fredericia holds a festival to commemorate the 1849 Battle of Fredericia, fought during the First War of Schleswig, in which Danish troops won a victory over the Schleswig-Holstein rebels who were laying siege to the town. Fredericia's landmark, Landsoldaten, was unveiled on 6 July 1858.[2]

The municipality today is part of the East Jutland metropolitan area with 1.2M inhabitants,[3] and is the site of Fredericia municipality's municipal council.

The town is one of Denmark's largest traffic hubs.

The town is a major barracks, home to the Royal Danish Army's army's Signals Regiment (Telegrafregimentet), which is located at Rye's Barracks (Ryes Kaserne) and Bülow's Barracks (Bülows Kaserne).