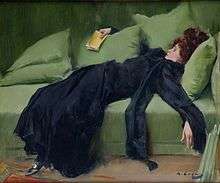 The Decadent movement was a late 19th-century artistic and literary movement of Western Europe. It flourished in France, but also had devotees in England and throughout Europe, as well as in the United States.

Decadence was the name given, originally by hostile critics, to several late nineteenth-century writers who valued artifice more than the earlier Romantics' naïve descriptions. Some of them adopted the name, referring to themselves as "Decadents". For the most part, they were influenced by the tradition of Gothic novels and by the poetry and fiction of Edgar Allan Poe, and were associated with Symbolism and/or Aestheticism.[1][2][3]

This concept of decadence dates from the eighteenth century, especially from Montesquieu, and was adopted by critics as a term of abuse after Désiré Nisard used it against Victor Hugo and Romanticism in general. A later generation of Romantics, such as Théophile Gautier and Charles Baudelaire used the word proudly, to represent their rejection of what they considered banal "progress."[4] During the 1880s a group of French writers referred to themselves as Decadents. The classic novel from this group is Joris-Karl Huysmans' Against Nature (1884), often considered the first great decadent work, though others attribute this honour to Baudelaire's works.[5] Prominent scholars of Decadence, such as David Weir, now regard Decadence as a transition between Romanticism and Modernism.[3]

In Britain the leading figures associated with the Decadent movement were Oscar Wilde, Aubrey Beardsley and some artists and writers associated with The Yellow Book. In the United States, the brothers Edgar and Francis Saltus wrote decadent fiction and poetry. Symbolism has often been confused with Decadence. Several young writers were referred to derisively in the press as "decadent" during the mid-1880s. Jean Moréas' manifesto was largely a response to this polemic. A few of these writers embraced the term while most avoided it. Although the aesthetics of Symbolism and Decadence can be considered to be similar in some respects, the two remain distinct.

Max Nordau wrote a bestselling attack on the movement, Degeneration (1892). A detailed study of the movement which attracted wide attention was The Romantic Agony (1933) by Mario Praz.