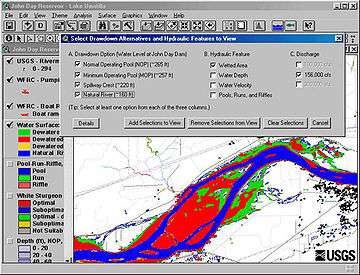 Example of a Decision Support System for John Day Reservoir.

A decision support system (DSS) is a computer-based information system that supports business or organizational decision-making activities. DSSs serve the management, operations, and planning levels of an organization (usually mid and higher management) and help people make decisions about problems that may be rapidly changing and not easily specified in advance—i.e. Unstructured and Semi-Structured decision problems. Decision support systems can be either fully computerized, human-powered or a combination of both.

DSSs include knowledge-based systems. A properly designed DSS is an interactive software-based system intended to help decision makers compile useful information from a combination of raw data, documents, and personal knowledge, or business models to identify and solve problems and make decisions.

Typical information that a decision support application might gather and present includes:

The concept of decision support has evolved mainly from the theoretical studies of organizational decision making done at the Carnegie Institute of Technology during the late 1950s and early 1960s, and the implementation work done in the 1960s.[4] DSS became an area of research of its own in the middle of the 1970s, before gaining in intensity during the 1980s. In the middle and late 1980s, executive information systems (EIS), group decision support systems (GDSS), and organizational decision support systems (ODSS) evolved from the single user and model-oriented DSS.

According to Sol (1987)[5] the definition and scope of DSS has been migrating over the years: in the 1970s DSS was described as "a computer-based system to aid decision making"; in the late 1970s the DSS movement started focusing on "interactive computer-based systems which help decision-makers utilize data bases and models to solve ill-structured problems"; in the 1980s DSS should provide systems "using suitable and available technology to improve effectiveness of managerial and professional activities", and towards the end of 1980s DSS faced a new challenge towards the design of intelligent workstations.[5]

In 1987, Texas Instruments completed development of the Gate Assignment Display System (GADS) for United Airlines. This decision support system is credited with significantly reducing travel delays by aiding the management of ground operations at various airports, beginning with O'Hare International Airport in Chicago and Stapleton Airport in Denver Colorado.[6] Beginning in about 1990, data warehousing and on-line analytical processing (OLAP) began broadening the realm of DSS. As the turn of the millennium approached, new Web-based analytical applications were introduced.

The advent of more and better reporting technologies has seen DSS start to emerge as a critical component of management design. Examples of this can be seen in the intense amount of discussion of DSS in the education environment.

DSS also have a weak connection to the user interface paradigm of hypertext. Both the University of Vermont PROMIS system (for medical decision making) and the Carnegie Mellon ZOG/KMS system (for military and business decision making) were decision support systems which also were major breakthroughs in user interface research. Furthermore, although hypertext researchers have generally been concerned with information overload, certain researchers, notably Douglas Engelbart, have been focused on decision makers in particular.

Another taxonomy for DSS, according to the mode of assistance, has been created by Daniel Power: he differentiates communication-driven DSS, data-driven DSS, document-driven DSS, knowledge-driven DSS, and model-driven DSS.[8]

Using scope as the criterion, Power[11] differentiates enterprise-wide DSS and desktop DSS. An enterprise-wide DSS is linked to large data warehouses and serves many managers in the company. A desktop, single-user DSS is a small system that runs on an individual manager's PC. 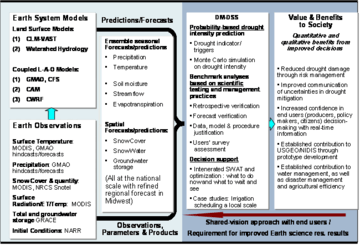 The users themselves are also important components of the architecture.[7][14]

Similarly to other systems, DSS systems require a structured approach. Such a framework includes people, technology, and the development approach.[12]

DSS technology levels (of hardware and software) may include:

An iterative developmental approach allows for the DSS to be changed and redesigned at various intervals. Once the system is designed, it will need to be tested and revised where necessary for the desired outcome.

There are several ways to classify DSS applications. Not every DSS fits neatly into one of the categories, but may be a mix of two or more architectures.

The support given by DSS can be separated into three distinct, interrelated categories:[16] Personal Support, Group Support, and Organizational Support.

DSS components may be classified as:

The nascent field of Decision engineering treats the decision itself as an engineered object, and applies engineering principles such as Design and Quality assurance to an explicit representation of the elements that make up a decision.

DSS can theoretically be built in any knowledge domain.

DSS is extensively used in business and management. Executive dashboard and other business performance software allow faster decision making, identification of negative trends, and better allocation of business resources. Due to DSS all the information from any organization is represented in the form of charts, graphs i.e. in a summarized way, which helps the management to take strategic decision. For example, one of the DSS applications is the management and development of complex anti-terrorism systems.[19] Other examples include a bank loan officer verifying the credit of a loan applicant or an engineering firm that has bids on several projects and wants to know if they can be competitive with their costs.

A growing area of DSS application, concepts, principles, and techniques is in agricultural production, marketing for sustainable development. For example, the DSSAT4 package,[20][21] developed through financial support of USAID during the 80s and 90s, has allowed rapid assessment of several agricultural production systems around the world to facilitate decision-making at the farm and policy levels. Precision agriculture seeks to tailor decisions to particular portions of farm fields. There are, however, many constraints to the successful adoption on DSS in agriculture.[22]

DSS are also prevalent in forest management where the long planning horizon and the spatial dimension of planning problems demands specific requirements. All aspects of Forest management, from log transportation, harvest scheduling to sustainability and ecosystem protection have been addressed by modern DSSs. In this context the consideration of single or multiple management objectives related to the provision of goods and services that traded or non-traded and often subject to resource constraints and decision problems. The Community of Practice of Forest Management Decision Support Systems provides a large repository on knowledge about the construction and use of forest Decision Support Systems.[23]

A specific example concerns the Canadian National Railway system, which tests its equipment on a regular basis using a decision support system. A problem faced by any railroad is worn-out or defective rails, which can result in hundreds of derailments per year. Under a DSS, the Canadian National Railway system managed to decrease the incidence of derailments at the same time other companies were experiencing an increase.