The Democratic Party of Japan (民主党, Minshutō) was a centrist[3] political party in Japan from 1998 to 2016.

The party's origins lie in the previous Democratic Party of Japan, which was founded in September 1996 by politicians of the centre-right and centre-left with roots in the Liberal Democratic Party and Japan Socialist Party.[4] In April 1998 the previous DPJ merged with splinters of the New Frontier Party to create a new party which retained the DPJ name.[5] In 2003 the party was joined by the Liberal Party of Ichirō Ozawa.[2]

Following the 2009 election, the DPJ became the ruling party in the House of Representatives, defeating the long-dominant Liberal Democratic Party (LDP) and gaining the largest number of seats in both the House of Representatives and the House of Councillors. The DPJ was ousted from government by the LDP in the 2012 general election. It retained 57 seats in the lower house, and still had 88 seats in the upper house. During its time in office, the DPJ was beset by internal conflicts and struggled to implement many of its proposed policies, an outcome described by political scientists Phillip Lipscy and Ethan Scheiner as the "paradox of political change without policy change".[6] Legislative productivity under the DPJ was particularly low, falling to levels unprecedented in recent Japanese history according to some measures.[7] However, the DPJ implemented a number of progressive measures during its time in office such as the provision of free public schooling through high school, increases in child-rearing subsidies,[8] expanded unemployment insurance coverage,[9] extended duration of a housing allowance,[10] and stricter regulations safeguarding part-time and temporary workers.[11]

On 27 March 2016 the DPJ merged with the Japan Innovation Party and Vision of Reform to form the Democratic Party (Minshintō).[12] 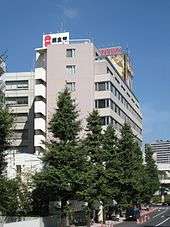 Headquarters of the Democratic Party of Japan

The Democratic Party of Japan (DPJ) was formed on 27 April 1998.[13] It was a merger of four previously independent parties that were opposed to the ruling Liberal Democratic Party (LDP) — the previous Democratic Party of Japan, the Good Governance Party (民政党, Minseitō), the New Fraternity Party (新党友愛, Shintō-Yūai), and the Democratic Reform Party (民主改革連合, Minshu-Kaikaku-Rengō). The previous parties ranged in ideology from conservative to social-democratic.[4] The new party began with ninety-three members of the House of Representatives and thirty-eight members of the House of Councilors. Moreover, the party officials were elected as well at the party convention for the first time; Naoto Kan, former Health and Welfare Minister was appointed as the president of the party and Tsutomu Hata, former Prime Minister as Secretary-General.

On 24 September 2003 the party formally merged with the small, centre-right Liberal Party led by Ichirō Ozawa[14] in a move largely considered in preparation for the 2003 general election held on 9 November 2003. This move immediately gave the DPJ eight more seats in the House of Councilors.

In the 2003 general election the DPJ gained a total of 178 seats. This was short of their objectives, but nevertheless a significant demonstration of the new group's strength. Following a pension scandal, Naoto Kan resigned and was replaced with moderate liberal Katsuya Okada.

In the 2004 House of Councilors elections, the DPJ won a seat more than the ruling Liberal Democrats, but the LDP still maintained its firm majority in total votes. This was the first time since its inception that the LDP had garnered fewer votes than another party.

The 2005 snap parliamentary elections called by Junichiro Koizumi in response to the rejection of his Postal privatization bills saw a major setback to the DPJ's plans of obtaining a majority in the Diet. The DPJ leadership, particularly Okada, had staked their reputation on winning the election and driving the LDP from power. When the final results were in, the DPJ had lost 62 seats, mostly to its rival the LDP. Okada resigned the party leadership, fulfilling his campaign promise to do so if the DPJ did not obtain a majority in the Diet. He was replaced by Seiji Maehara in September 2005.

However, Maehara's term as party leader lasted barely half a year. Although he initially led the party's criticism of the Koizumi administration, particularly in regards to connections between LDP lawmakers and scandal-ridden Livedoor, the revelation that a fake email was used to try and establish this link greatly damaged his credibility. The scandal led to the resignation of Representative Hisayasu Nagata and of Maehara as party leader on 31 March.[15] New elections for party leader were held on 7 April, in which Ichirō Ozawa was elected President.[16] In Upper House election 2007, the DPJ won 60 out of 121 contested seats, with 49 seats not up for re-election.

Ozawa resigned as party leader in May 2009 after a fundraising scandal and Yukio Hatoyama succeeded Ozawa before the August 2009 general election,[13] at which the party swept the LDP from power in a massive landslide, winning 308 seats (out of a total of 480 seats), reducing the LDP from 300 to 119 seats[17][18] - the worst defeat for a sitting government in modern Japanese history. This was in marked contrast to the closely contested 1993 general election, the only other time the LDP has lost an election. The DPJ's strong majority in the House of Representatives assured that Hatoyama would be the next prime minister. Hatoyama was nominated on September 16 and formally appointed later that day by Emperor Akihito.

However, the DPJ did not have a majority in the House of Councillors, which was not contested at the election, and fell just short of the 320 seats (a two-thirds majority) needed to override the upper chamber's veto power. Hatoyama was thus forced to form a coalition government with the Social Democratic Party and the People's New Party to ensure their support in the House of Councillors.[19]

On 2 June 2010, Hatoyama announced his resignation before a party meeting and officially resigned two days later. He cited breaking a campaign promise to close an American military base on the island of Okinawa as the main reason for the move. On 28 May 2010, soon after and because of increased tensions after the possible sinking of a Korean ship by North Korea,[20] Hatoyama had made a deal with U.S. President Barack Obama[21][22][23][24][25] to retain the base for security reasons, but the deal was unpopular in Japan. He also mentioned money scandals involving a top party leader, Ozawa, who resigned as well, in his decision to step down.[21] Hatoyama had been pressured to leave by members of his party after doing poorly in polls in anticipation of the July upper house election.[26] Naoto Kan succeeded Hatoyama as the next President of DPJ and Prime Minister of Japan.[27]

At the July 2010 House of Councillors election, the DPJ lost ten seats and their coalition majority. Prior to the election Kan raised the issue of an increase to Japan's 5 per cent consumption tax in order to address the country's rising debt. This proposal, together with Ozawa and Hatoyama's scandals, was viewed as one of the causes for the party's poor performance in the election. The divided house meant the government required the cooperation of smaller parties including Your Party and the Communist Party to ensure the passage of legislation through the upper house.[28]

Ozawa challenged Kan's leadership of the DPJ in September 2010. Although Ozawa initially had a slight edge among DPJ members of parliament, local rank-and-file party members and activists overwhelmingly supported Kan, and according to opinion polls the wider Japanese public preferred Kan to Ozawa by as much as a 4–1 ratio.[29] In the final vote by DPJ lawmakers Kan won with 206 votes to Ozawa's 200.[30]

After the leadership challenge, Kan reshuffled his cabinet and removed many prominent members of the pro-Ozawa faction from important posts in the new cabinet.[31] The cabinet reshuffle also resulted in the promotion of long-time Kan ally Yoshito Sengoku to Chief Cabinet Secretary, who the LDP labeled as the "second" Prime Minister of the Kan cabinet.[32]

In September 2010 the government intervened to weaken the surging yen by buying U.S. dollars, a move which temporarily relieved Japan's exporters.[33] The move proved popular with stock brokers, Japanese exporters, and the Japanese public.[33] It was the first such move by a Japanese government since 2004.[33] Later, in October, after the yen had offset the intervention and had reached a 15-year high, the Kan cabinet approved a stimulus package worth about 5.1 trillion yen ($62 billion) in order to weaken the yen and fight deflation.[34]

On 24 February 2016, the DPJ announced and agreement to merge with the smaller Japan Innovation Party (JIP) and Vision of Reform ahead of the Upper House elections in the summer,[35][36] with a merger at a special convention agreed for 27 March.[37] On 4 March 2016, the DPJ and JIP asked supporters for suggestions for a name for the new party.[38] On 14 March 2016 the name of the new party was announced as Minshintō, having been the most popular choice of possible names polled among voters.[39][40] With the addition of Representatives form Vision of Reform, the DPJ and JIP merged to form the Democratic Party on 27 March 2016.[41][42]

The Democratic Party of Japan (DPJ) called their philosophy Democratic Centrism (ja:民主中道, minshu-chūdō), which was determined in the first party convention on 27 April 1998.[43]

The DPJ aimed to create a platform broad enough to encompass the views of politicians who had roots in either the Liberal Democratic Party or Japan Socialist Party.[5] Party leader Naoto Kan compared the DPJ to the Olive Tree alliance of former Italian Prime Minister Romano Prodi, and described his view that it needed to be "the party of Thatcher and Blair".[5]

View of the status quo

The DPJ claimed themselves to be revolutionary in that they are against the status quo and the current governing establishment. The DPJ argued that the bureaucracy and the size of the Japanese government is too large, inefficient, and saturated with cronies and that the Japanese state is too conservative and inflexible. The DPJ wanted to "overthrow the ancient régime locked in old thinking and vested interests, solve the problems at hand, and create a new, flexible, affluent society which values people's individuality and vitality."[44]

The Democratic Party sought to build a society governed with rules which are transparent, just and fair.

While the party argued that the free market system should "permeate" economic life, they also aim for an inclusive society which guarantees security, safety, and fair and equal opportunity for each individual.

The party intended to devolve the centralized government powers to citizens, markets, and local governments so that people of all backgrounds can participate in decision-making.

The Democratic Party proclaimed to hold the values in the meaning of the constitution to "embody the fundamental principles of the Constitution": popular sovereignty, respect for fundamental human rights, and pacifism.[44]

As a member of the global community, the party sought to establish Japan's international relations in the fraternal spirit of self-reliance and mutual coexistence to restore the world's trust in the country.[44]

The DPJ's policy platforms included the restructuring of civil service, monthly allowance to a family with children (¥26,000 per child), cut in gas tax, income support for farmers, free tuition for public high schools, banning of temporary work in manufacturing,[45] raising the minimum-wage to ¥1,000 and halting of increase in sales tax for the next four years.[46][47]

The DPJ had some political factions or groups, although they werre not as factionalized as the LDP, which has traditionally placed high priority on intra-party factional alignment. The groups were, the most influential to the least influential:

The Independent’s Club was a minor political party which formed a political entity with the DPJ in both chambers of the house.

Presidents of the Democratic Party of Japan