Temporary work or temporary employment refers to an employment situation where the working arrangement is limited to a certain period of time based on the needs of the employing organization. Temporary employees are sometimes called "contractual", "seasonal", "interim", "casual staff", "outsourcing", "freelance"; or the word may be shortened to "temps". In some instances, temporary, highly skilled professionals (particularly in the white-collar worker fields, such as law, engineering, and accounting) refer to themselves as consultants. 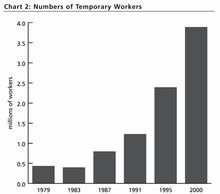 Trends in Temporary Work (US): source: D. H. Author, Outsourcing at Will: The Contribution of Dismissal Doctrine to the Growth of Employment Outsourcing

The staffing industry in the United States began after World War II with small agencies in urban areas employing housewives for part-time work as office workers. Over the years the advantages of having workers who could be hired and fired on short notice and were exempt from paperwork and regulatory requirements resulted in a gradual but substantial increase in the use of temporary workers, with over 3.5 million temporary workers employed in the United States by 2000.[1]

There has indeed been a great paradigm shift since the 1940s in the way firms utilize the temporary worker. Throughout the Fordist era, temporary workers made up a rather marginal proportion of the total labor force in North America. Typically, temporary workers were white women in pink collar, clerical positions who provided companies with a stop-gap solution for permanent workers who needed a leave of absence, when on vacation or in illness.[2] In contrast, in the Post-Fordist period, characterized by neoliberalism, deindustrialization and the dismantling of the welfare state, these understandings of temporary labor began to shift.[3] In this paradigm, the idea of the temporary worker as a stopgap solution to permanent labor became an entirely normative employment alternative to permanent work.[4]

Therefore, temporary workers no longer represented a substitute for permanent workers on leave but became semi-permanent, precarious positions routinely subject to the threat of elimination because of fluctuations in a company's products. In the context of today's temporary labor force, both people and positions have become temporary, and temporary agencies use the temporary worker in a systematic and planned, as opposed to impromptu manner.[2]

As the market began to transform from Fordism to a post-Order regime of capital accumulation, the social regulation of labor markets and the very nature of work began to shift.[5] This transformation has been characterized by an economic restructuring that emphasized flexibility within spaces of work, labor markets, employment relationships, wages and benefits. Most governments in Western Europe started to deregulate temporary work.[6] And indeed, global processes of neoliberalism and market rule contributed greatly to this increasing pressure put on local labor markets towards flexibility.[7] This greater flexibility within labor markets is important at the global level, particularly within OECD countries and liberal market economies (see liberal market economy).

The temporary labor industry is worth over €157 billion per year, and the largest agencies are spread across over 60 nations. The biggest temporary work agencies are most profitable in emerging economies of the Global North, and those that have undergone market liberalization, deregulation and (re)regulation.[8]

The desire to market flexible, adaptable temporary workers has become a driving, monetary oriented objective of the temporary work industry. This has caused individual agencies to adopt practices that focus on competition with other firms, that promote “try before you buy” practices and that maximize their ability to produce a product: the temporary worker. Through this process, the ideal temporary worker has today become largely imagined, produced and marketed by temporary agencies.[9]

The role of a temp agency is as a third party between client employer and client employee. This third party, handles remuneration, work scheduling, complaints, taxes, etc. created by the relationship between a client employer and a client employee. Client firms request the type of job that is to be done, and the skills required to do it. Client firms can also terminate an assignment and are able to file a complaint about the temp.[10][11] Work schedules are determined by assignment, which is determined by the agency and can last for an indeterminate period of time, extended to any point and cut short.[10] Because the assignments are temporary, there is little incentive to provide benefits and the pay is low in situations where there is a lot of labor flexibility. (Nurses are an exception to this as there is currently a shortage).[10][11][12] Workers can refuse assignment but risk going through an indeterminate period of downtime since work is based on availability of assignments, which the agency cannot “create” only fill.[10]

Whether the work comes through an independent gig economy source or a temp agency, when a temporary employee[13] agrees to an assignment, they receive instructions pertaining to the job. The agency also provides information on correct work attire, work hours, wages, and whom to report to. If a temporary employee arrives at a job assignment and is asked to perform duties not described when they accepted the job, they may call an agency representative for clarification. If they choose not to continue on the assignment based on these discrepancies, they will most likely lose pay and may undermine chances at other job opportunities. However, some agencies guarantee an employee a certain number of hours pay if, once the temporary employee arrives, there is no work or the work isn't as described. Most agencies do not require an employee to continue work if the discrepancies are enough to make it difficult for the employee to actually do the work.[14]

A temporary work agency may have a standard set of tests to judge the competence of the secretarial or clerical skills of an applicant. An applicant is hired based on their scores on these tests, and is placed into a database. Companies or individuals looking to hire someone temporarily contact the agency and describe the skill set they are seeking. A temporary employee is then found in the database and is contacted to see if they would be interested in taking the assignment.[14]

It is up to the temporary employee to keep in constant contact with the agency when not currently working on an assignment; by letting the agency know that they are available to work they are given priority over those who may be in the agency database who have not made it clear that they are ready and willing to take an assignment. A temp agency employee is the exclusive employee of the agency, not of the company in which they are placed (although subject to legal dispute). The temporary employee is bound by the rules and regulations of the client firm, even if they contrast with those of the company in which they are placed.

There are a number of reasons as to why a firm utilizes temp agencies. They provide employers a way to add more workers for a short term increase in the workforce. Using temps allows firms to replace a missing regular employee. A temp worker’s competency and value can be determined without the inflexibility of hiring a new person and seeing how they work out. Utilizing temp workers can also be a way of not having to pay benefits and the increased salaries of a regular employees. A firm can also use temp workers to vary compensation in what would normally be an illegal or impossible manner. The role of temp workers in the work space can also have the effects of coercing regular employees into taking more work for less pay. Additionally, temp workers are less likely to sue over mistreatment, which allows firms to reduce the costs of employment in high-stress, regulated jobs.[10][11][12][15]

Temp agencies are a growing part of industrial economies. From 1961-1971 the number of employees sent out by temporary staffing agencies increased by 16 percent. Temporary staffing industry payrolls increased by 166 percent from 1971 to 1981, and 206 percent from 1981 to 1991, and 278 percent from 1991 to 1999. The temporary staffing sector accounted for 1 out of 12 new jobs in the 90’s.[15] In 1996, $105 billion, worldwide,in staffing agency revenues. By 2008, $300 billion was generated, worldwide, in revenues for staffing agencies.[16] The Temporary Staffing Industry accounts for 16% of job growth in the U.S. since the great recession ended, even though it only accounts for 2% of all-farm jobs.[17] This growth has occurred for a number of reasons. Demand in temporary employment can be primarily attributed to demand by employers and not employees [12][18] A large driver of demand was in European labor market. Previously, temporary employment agencies were considered quasi-legal entities. This reputation shied potential client employers away. However, in the later half of the 20th century, there would be shift predominated by legal protections and closer relationships with primary employers. This combined with the tendency for growth of the TSI in countries where there are strict regulations on dismissal of hired employees but loose regulations on temporary work, growth is much faster compared to industrialized nations without these labor conditions.[18][19]

Abuse in the temporary staffing industry

Staffing agencies are prone to improper behavior just like any other employer.[10][16] There have been cases of some temp agencies that have created and reinforced an ethnic hierarchy that determines who gets what jobs.[11]

Temps have been told to be a “guest” and not a worker, which can lead to worker exploitation. One ramification is that temps have to deal with sexual harassment and are sometimes encouraged not to report it, and in some rare cases encouraged to make themselves “sexually available”.

An additional ramification of temp workers “guest” status is being at the bottom of the workplace hierarchy, which is visually identifiable on ID cards, in different colored uniforms, as well as the encouragement of more “provocative dress”.[11] Their “guest” status often means, temp Workers are unable to access on-site workplace accommodations and aren’t included in meetings despite the length of their time working at the client firm.[10][11][20]

This is all compounded by a work system in which temps must file complaints about clients through the temp agencies, which, often enough, not only disqualifies them from another assignment at that firm, it disqualifies them from receiving an assignment from that temporary agency upon review.[10] Since a client firm is harder to replace than a client employee and there is no disincentive to not giving a complaining employee, an assignment; there is an incentive for agencies to find employees who are willing to go along with the conditions for client firms, as opposed to severing ties with firms that routinely violate the law.[10]

Scholars have argued that neoliberal policies have been a prominent component in the erosion of the standard employment relationship. This precarious new model of employment has greatly reduced the worker’s ability to negotiate and, in particular, with the introduction of advanced technology (that can easily replace the worker), reduced the temp’s bargaining power.[23] It has been suggested that labour regulations in North America do little in addressing labour market insecurities and the precarious nature of temporary labour. In many cases, legislation has done little to acknowledge or adapt to the growth of non-standard employment in Canada.[24]

In the European Union, temporary work is regulated by the Temporary Agency Work Directive and the Member States' laws implementing that directive.[25]